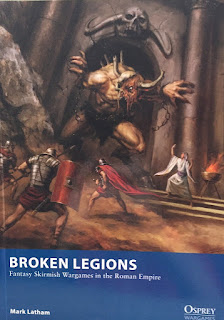 This is a fantasy skirmish game set at the height of the Roman Empire.  In the game, small warbands of Rome and her enemies battle on the fringes of Empire to regain artifacts and the blessings of the gods.  This is another game in the “Blue” series of Osprey Wargames.  I was excited about this game before I got it since it has a gladiator faction.  I love gladiators and I was excited to use my Gladiator models in a new game.

The game does not have notes, but I did run across the creator’s blog who advised that this game was about big heroes doing heroic things, in a more cinematic universe, with monsters and skirmish play.  Let’s see how it turned out shall we?

What I Liked
The dice rolls are generally opposed dice rolls where you roll ad 10 and add your stat.  Whoever rolls highest wins.  Typically, there was an opposed skill roll, that was then an opposed strength vs physique roll that included armor and other mods to actually cause damage.  I tend to prefer this method as opposed to one dice roll to rule them all.  I think it is generally less complicated from what I have seen in other game engines, however I am not sure it is in this one since both rolls have modifiers for armor, strength, weapon bonus, etc.

The game uses a combination of stats and special rules.  This allows more customization and flexibility in the mechanics.  However, those of you who have played a lot of Games Workshop games may feel that the stat-line is oddly familiar.  In fact, the entire ruleset seems to be steeped in the GW style system.  It reminded me of Legends of the Old West or the Lord of the Rings system.  Some people will not like this, but I like both of those games so there you go.  The special rules only take up about 3 pages and the Miracles/spells about 3 as well.

The game definitely emphasizes combat over ranged attack.  Ranged attack will have a place but won’t dominate the game.  This makes sense in a Roman dominated game.  Heroic Actions and Miracles allow you to break the turn sequence, buff/debuff troops, and other fun things.  This add a bit of spice to the mechanics and will help keep them interesting and fresh.

Things I Do Not Like
The game comes with a campaign system, but I am not convinced it works.  It seems like only the winners get benefits, and that leads to winners continuing to win and losers dropping out of the campaign.  I have a feeling that space limitations hampered this campaign as it would lend itself well to a Mordheim style campaign.

Heroes are not easy to bring down.  They have an extra save called Fate.  Coupled with improved stats and gear and they could be challenging to bring down.  Most likely it will be hero vs. hero for a decisive victory.  There is even a Heroic Action to bring this about.  On the downside, it makes everyone else feel a bit like fodder.

Many of these campaign games need a different mechanism for morale and running away.  With the current system, it feels like most warbands will fight nearly to the death, and psychology does not play a big part in the game.  That is fine for one-off games, but in a campaign that will not do.  It isn’t much of a campaign if one side gets almost completely annihilated in the first game.

Most dice rolls in Melee, Shooting, and Miracles require two dice.  One is for the normal “To Hit” roll, while the second is to determine criticals and fumbles.  I am not a fan of this method.  The second Critical dice is only needed 20% of the time anyway.  Just roll it when it is needed.

Meh and Other Uncertainties
The game comes with 5 Scenarios to play.  I wish there were a couple more, but that is when you can get creative.  They do tend to emphasize the fantasy elements of the game, which is a good touch.

There are a number of hired swords called Auxilia you can hire.  These tend towards the fantastic such as centaurs, cyclops, amazons, etc.  However, they also include a Sicarius assassin which is a nice touch.  However, it feels like another mechanism in which winners in a campaign can start to pile on their opponents.

Wandering Monsters, guardians of the gods secret treasures, add another element to scenarios.  They have a rudimentary  AI and tend to move pretty fast.  Therefore, they can get stuck in.  This element reminded me a bit of Frostgrave with the enemy not just being your opponent, but the board itself.  Plus, it adds to the Mythological theme.

The game has 3 Roman factions, and 5 non-roman factions.  The Roman Factions have every reason to fight each other as they have conflicting loyalties.  They include Legionary soldiers, Gladiators, a cult of Mithras with legionaries and gladiators, a Cult of Sect with mummies, Parthian Magi with cavalry, barbarians with werewolves, Dacians with vamps, and Greeks who think they are Argonauts so you can use hoplites.  If you have an Of Gods and Mortals army all ready, most of them could fit in really good in this game too!

The game tends to use an alternating activation, however Heroic Actions and some Miracles can allow you to break up the normal sequence.  Typically it allows you to move a body of troops together out of sequence.  This can lead to a big advantage.

The game is laid out nicely, and I feel it would be easy to use in game.  It does a nice job covering key concepts up front, before diving into the game itself.  The pictures are great, and you get a second look at some Scenery and models used in other older books.  However, their Egyptian tomb set-up is always cool, but I have seen it in Of Gods and Mortals and In Her Majesties Name before now.

Final Thoughts
Overall, I am pleased with the game but it treads on relatively safe and familiar ground for most of us.  The campaign system will need some work, but again bolting on the Mordheim system should work just fine.  If you tend to like Games Workshop Specialist and Historical skirmish games, then this one won’t disappoint you.   The game doesn’t take a lot of chances and tends to stay with what has worked well for other games in the past.  It doesn’t break the mold and it doesn’t try to.  That is both Broken Legions strength and weakness.

My Own Broken Legions Force
Here is my Sons of Spartacus warband.  They are all from Crusader's great gladiator range.  I also use these guys for my own The Games: Blood and Spectacle arena battles.

That's all it takes to build a warband for this game.  Now, all I need is some opponents to face off against them. 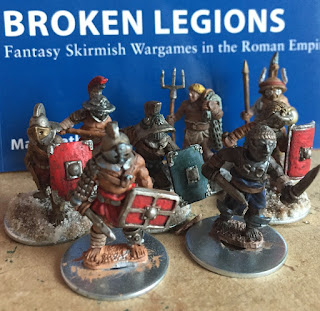 Posted by Blood and Spectacles Publishing at 9:03 AM