Review: The Men Who Would Be Kings- Osprey Wargame Series 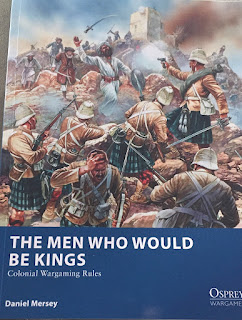 Daniel Mersey returns with another book for the osprey Wargaming Series.  He also has penned Dux Bellorum, Lion Rampant, and Dragon Rampant.  This only adds to his efforts previously.  He may be my favorite designer in the series so far.   As he writes rules, he is not completely grounded in the history and instead adds a good dose of “Hollywood” into his rulesets.

This set focuses on “Colonial Wargaming” which covers a broad scope of time and conflicts across the globe.  That can be a daunting exercise.  However, his style may not be for everyone’s taste.  Thankfully, his design style starts with his objectives.  This allows the reader to judge for themselves how successful Mr. Mersey is at meeting them.  In The Men Who Would Be Kings his objectives were:

With those criteria in mind, let’s dig into the book itself.

Things I Liked
These are not a reskin of rules like Dragon Rampant was to LionRampant.  You can see the core mechanics that were built upon from Lion Rampant, but they are a unique animal.  For example, each unit still has an “Activation Test” based on the officer’s leadership and discipline of the unit.  If failed, they will not act.  In DragonRampant or Lion Rampant, that would end your turn.  That is not the case in The Men Who Would Be Kings.  Instead, that unit is inactive while other units act.  However, all units can do a “Free Action” without passing a test.  The Free action varies by unit type.  Regulars can always fire, while natives can always Go To Ground.  That means   our units can always do something… but not necessarily what you wanted them to do.

This game has basic rules for solo-play/all players vs a GM.  This is nice to see.  Interesting, in solo-play enemy units can appear relatively close or far away.  They do not always start at the opposite side of the board.  The solo-play rules allow you to be the Colonials, Natives, or even Regulars vs. Regulars.

Force building is very easy and straight forward.  Like LionRampant, each unit is a broad category.  The units are divided into three categories; Regulars, Irregulars, and Natives.  These are further broken up into infantry, mounted infantry, or cavalry.  The designer essentially manages to break down a very complex period into easily digestible chunks which allows the game to cover a wide array of conflicts.

Things I Do Not Like
The game is essentially IGOUGO if I am reading it right.  Players determine initiative.  The winner may then choose a unit, give it an order, and test to see if the order is carried out.  The order is completed and the player moves onto the next unit.  This can lead to long stretches of the opponent doing nothing more than removing models.  This is somewhat mitigated by the size of the forces involved.

There are no specific campaign rules in the book for boasts and glory which was a bit disappointing since individual officers are such a big deal in this game.  Even a bit of the old Glory and Boasts from the other books would have been a nice add.  However, it looks like they replaced the campaign rules with the solo-play rules called Playing Against Mr. Babbage.

Meh and Other Uncertainties
In Dragon Rampant or Lion Rampant, the leader of your army was the only one with personalities that were randomly rolled.  I personally was not a fan of these Leadership traits in those rules as they were unbalancing.  In these rules each Unit has randomized, individual Leader skill and traits.  These range from hapless and terrible to remarkable leaders, with most being somewhere in between.  I find this system works better in this game since you can use other officers in different units to off-set.  I think it will add to the friction of the game.  This will not be to all players tastes.

There is a chance that the leaders of your Units will be killed off.  When casualties occur, there is a random test to see if any were your leader.  Leaderless troops typically have worse leadership tests (unless they were led by a hapless twit, which is possible) which makes the unit less reliable.

Terrain is abstracted to not impede play.  Generally troops in terrain require more hits to remove casualties.  It also has some impact on moving.  Overall, the terrain rules are designed to be quick and easy without getting in the way of the game.

Pinning plays a big role in this game.  Pinned units can only try to Rally and may not take other actions.  This limits their ability to respond to the enemy.  Units are pinned by shooting, losing in melee, or seeing units wiped out nearby.

The game comes with a variety of scenarios to choose from.  The ones presented could fit nicely into a campaign.  The scenarios presented look like modifications and updates to scenarios in the Lion Rampant book and possibly a handful of new ones.  There are also a handful of optional rules including limited ammo which looks like a treat.  This also includes some theater specific rules.

Final Thoughts
I had been toying with the idea of making a game for the Dakota War of 1862.  I feel like these rules would fit the bill for the Dakota War perfectly since much of the war was smaller unit actions featuring irregular troops and natives.  These rules fit the bill nicely.  They would also work nicely for the Italo-Turkish War, another game I wanted to put on.

However, I am not sure I am as sold on these rules as I am on Mr. Mersey’s other works.  He does a great job of streamlining and simplifying force selection for a variety of periods.  He also achieves his design objectives admirably.  By those measures this game is a success.  However, one of my most important elements in a game is Turn Sequence, and I am not satisfied with the IGOUGO nature of the game.

That being said, I think this game fits a smaller scale wargame better than Blackpowder.  I prefer Blackpowder’s push your luck turn mechanics, but Blackpowder is pitched more at Regulars vs. Regulars than Colonial efforts.  I think the streamlined nature of this game and the scale suits itself well for a night of gaming with minimal effort.  Therefore, I don’t think you can go wrong for the price.
Posted by Blood and Spectacles Publishing at 7:38 PM