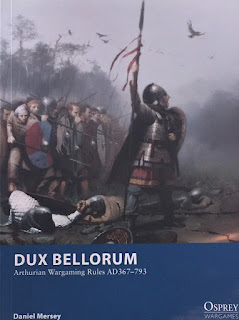 Dux Bellorum is another offering by Osprey publishing in their wargames line.  This one focuses on Dark Age/Arthurian wargaming and is written by Daniel Mersey.  Mr. Mersey has written other wargames for the time period and is considered an expert in the age.  Therefore, he seems like he has the pedigree to write a pretty amazing ruleset.

One of my favorite things about these Osprey publishing rules is that they start with the designer’s notes up front.  Therefore, I have a pretty good idea about what the designer intended before I dig into the rules.  This is very helpful when writing reviews.  A couple points that stick out is that Mr. Mersey wanted a non-competitive game that was scale agnostic and reasonably quick and easy to play.  Did he succeed?

Things I Liked
The main element of Dux Bellorum is the focus on the allocation of Leadership Tokens.  These tokens will allow your units to do some things above and beyond what they are normally capable of and represent the leadership of the commander and his unit commanders.  Now, the trick is, you only get a certain number of these to spend, so it is a resource to be managed.  You can only assign 3 to anyone unit.

The system uses Base Widths for all measurements, so I can use any scale figures I want to use.  This avoids the usual historical/ancients problems of bases sizing and frontage.  Realistically, this game requires only about 50 figures r so per side, and when you start getting into 10mm or so that is relatively cheap and easy to collect and paint.

The army lists are also pretty straightforward with a few little unique twists you can add for fluff such as Priests, cattle stampedes etc.  There are very few stats needed, and the whole thing seems internally consistent.  They also use diagrams to illustrate some of the key concepts for moving!  That is always a good thing.

Things I Did Not Like
Skirmishers in this game seem really pointless, but they were a key element of Dark Ages battles.  Due to how the turn structure is set-up and the ranges, it doesn’t seem like the Skirmishers will ever really get a chance to do anything before they get engaged.  Plus, as you lose units you lose Leadership Points, so I am unsure why/how you could effectively use a force with Skirmishers and archers without handicapping your ability to generate the all-important Leadership Tokens.

Also, two shieldwalls coming together combined with Leadership Tokens that can negate hits seems like it would take forever to resolve with a lot of pointless turns going on in between.  However, the rules do recommend a few limits in how some of the Leadership Tokens are used.

It seems like you will always load up certain units with your leadership Tokens, while other will be simply considered expendable.  This is highlighted by the fact that you would then only choose one or two ways to spend the Leadership Tokens as they just seem objectively superior to the other ways you could use them.  This will lead to a-certain “sameness” in the battles unless one gets creative with the scenarios.

Meh and Other Uncertainties
Other writers have commented on the fragility and lack of mobility in some of the cavalry units.  Mr. Mersey has responded by pointing out that ponies in England at the time weren’t like warhorses in later medieval times, and couldn’t deliver a shock charge in the same way.  I am satisfied with his arguments, after all he knows way more about the period than I do.   Mounted units give you mobility, but in exchange for less hitting power than infantry and that seems right to me.  Cavalry is all about using them at the right time and the right point anyway.

Before activating a unit, you must make a Bravery test to see if your unit will respond to your prodding.  Some people dislike this approach.  They prefer that their little men do what they are told.  Others prefer a method that lets you know how many units you can use, and then choose based on need.  I am not too fussed either way.  However, it is an element of the rules that not everyone likes so I figured I better call it out.

The game comes with a few scenarios, but again they seem a bit rinse and repeat.  However, the Bards scenario looks fun and interesting and a nice twist on the standard battle.

This game ends just before the Viking Invasions, so you Vikingphiles will have to get your Northman fix someplace else.  So, take off you hosers!

Final Thoughts
This game is a fun little addition for those of you who are really into Dark Ages miniature gaming.  It will give you a different game feel than what you typically play.  I’m guessing it is mostly SAGA, WAB, or DBW (Whatever).  This rule set leans closer to the abstracted side of things, and seem to work with these rules.  I think Mr. Mersey has succeeded in his design goals!  I think they could make for a really fun themed, short campaign.  However, I have a feeling the re-playability of these rules is not their strength.

If you have tried or read these rules, let me know what you think!

Posted by Blood and Spectacles Publishing at 2:10 PM