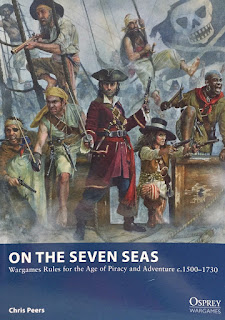 This was the seventh game created for the Osprey “Blue” Wargames series.  The focus of this game is pirate actions on sea and land.  It is a skirmish game with factions numbering 16 figures per side.  Sadly, this book does not really have designer notes, but I can guess at some of the desires for the game.  It clearly wanted to have a strong focus on boarding actions, and land actions were a secondary concern.   The entire “Pirate Loop” mini-campaign focused on boarding actions and skipped any land engagements with a die roll.  In addition, there were some notes that 1 figure equaled about 5 men, so the standard game of 16 models was to represent a crew of around 80.  However, these are more of a guideline than hard and fast rules.  With some of the basic game ideas out of the way, lets dive into the review.

Things I Liked
This time, I am going to start with some of the petty stuff.  This book had some gorgeous art that really captured the “Golden Age” of piracy.  The mini and in-game pictures were also very good.  There was some redundancy with models, but the ships and jungle islands looked amazing!  This book was great to look at.

The most interesting mechanic in the game revolved around Morale.  Each faction had to separate Morale stats called Greed and Fear.  The two stats determined the potential activity of the faction and the order of actions.  Greed and Fear were also mutable stats, in that they would be influenced over the course of the game by the events on the table.

Fear dictated how likely a group was to run away, or be shaken.  If their Fear score ever exceeded their Greed score, they would not advance to the enemy or willingly engage in hand-to-hand.  If their fear score reached 10, they would rout.  Fear could be impacted by casualties, ships striking their colors, and Captain’s threats.  Captain models could move their own factions Fear and Greed scores up and down, and those of their compatriots.  One potential issue, I do not recall a way to make Greed go down.  Therefore, a few turns of a Captain’s choice words and the Greed would be at 10, and Fear could not exceed it until broken.  However, you opponent may not give you the time to rally Greed up that high.  I like the idea of this mechanic a lot, but it may need a bit of tweaking to make it work fully in game.

You might think that this game would focus on that Golden Age, but they have faction lists for Japanese, Chinese, and Barbary pirates as well.  I was excited to see Barbary Pirates in there.  That means I could have them face off against Stephen Decatur and the Americans.

Things I Did Not Like
The ranges in this game are extremely short.  A model can move 4 inches, and a musket can only shoot 8.  Therefore, you will get very few shots off before hand-to-hand.  In addition, you need to roll a 10 on a d10 to hit.  Most of your shooting will miss, so this game naturally has a hand-to-hand focus.  Both of these decisions make some sense in the context of a sea fight, where board scales need to consciously be condensed to get to an actual boarding action.  However, if you were playing a standard game on land it would make very little sense to bother with musket armed crew.  Just give them some hand-to-hand weapons and go for it.

Hand-to-Hand is also much more decisive, as you only need to beat your opponent to inflict fallbacks and injuries.  Again, this makes some sense in the context of boarding actions, but becomes a bit silly if you are trying to have your men attack a fortified camp on land.

The organization of the rules could also use some work.  Rules are scattered about, and there are a lot of arbitrary rolling.  I.E. if you score a 1-3 on a d10 this happens, but a different time might have a 1 on a d10 cause issues.  There does not seem to be a unified mechanic beyond rolling a d10.  Sometimes, you use opposed rolls, others you are rolling for a target number, and sometimes you are just trying to avoid a certain set of results.  This makes the rules feel unfocused, unfinished, and a bit clunky.

Meh and Other Uncertainties
The game has some basic rules for sailing, so you can get up close and start your boarding action.  Considering the focus of the rules, it almost feels like they should just start the game grappled.  However, there are also rules for launching boats, towing, landing ashore, etc.  The rules try to cover every potential aspect of a Pirate game, but it is hard to say as the lay-out is a bit chaotic.

You can give your captain’s some special abilities, and maybe a few men here and there.  However, most of them are unarmored mooks who will die the moment they are hit.  Each faction is also very similar in make-up.  There is also some basic ships/boats and cannons.

There is a basic map based campaign but this is not a campaign game per se.  Guys do not level up, they do not get serious injuries.  This is more a stand-alone wargame.  Events from previous battles only carry over as casualties, ship damage, and Doubloons.  It is basic, and some arbitrary dice rolling is needed to navigate some parts of the map.

The turn sequence allows your Captain to do stuff, shoot, move (with hand-to-hand).  It is interesting that you shoot then move so slow firing weapons like arquebus and muskets do not really need to re-load ever.  That is abstracted away.

Final Thoughts
Well, I don’t think I can recommend this game.  It is too arbitrary with no coherent system, and I was not sold on the short ranges and ineffective shooting.  It would work better for one-off boarding games, but not much beyond that.  I am confident that there are better pirate games out there…. But I don’t know what they are.  I know I will not be rushing out to buy some pirates to play, even though the models showed in the book were amazing.

That being said, I think the Fear vs. Greed system is pretty innovative and something I want to explore more in other games.  Therefore, I am glad that I read the rules for this nugget of an idea.  I can see something like it working well in any game system where the factions are a bit more… mercenary in nature.

Posted by Blood and Spectacles Publishing at 2:30 PM