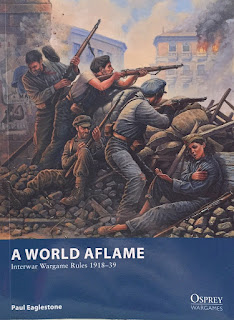 This ruleset was published by Osprey in their Wargaming series a few years back.  The rules are designed to cover the interwar years between World War I and World War II.  No surprise, this was a time of evolution, experimentation, uncertainty, and even regression when it came to the military arts.  To some gamers, this makes it a much more exciting time to game than the more traditional and orthodox eras.  This time frame is also famous for “Pulp” style games and the A Very British Civil War.

One thing I have liked about the Osprey rules so far is that they actually start with the Designer's Notes up front.  They serve to give you a feel for the rules set to follow and help inform you of what you are about to read and see.  The author (Paul Eaglestone) is very upfront that the rules you are about to read use a Retro Feel.  He references the works of Grant and Featherstone as his touch points.  So, reading this I was better prepared for what mechanics and writing style I was about to read.

I would argue, not only is this a “retro” designed book, but it is also very British.  I have seen similar styles with writer's such as Rick Priestley.  The rulebook is almost an after thought and a formalization of the conventions Mr. Eaglestone and his friends have been using in their personal games for years.   Now you the reader can try them out too.  I actually like this style of writing for the most part and it feels very comfortable and welcoming.  However, that doesn't mean I am a fan of all of the quirks of this writing style.  If you are looking for tight, tournament rules then you have come to the wrong place.

Things I Liked
There are certain flairs in this game that I really enjoyed related to Command and Control.  The game has a focus on officers and the difficulty of communications.  Officers with the unit give your troops big bonuses for activating and doing stuff.  Without there bonuses, it makes the unit less effective.  In addition, each unit has written orders it needs to carry-out during the game.  To change them requires a concerted effort by runners or possession of a telegraph/telephone line such as a phone booth.  Changing these written orders in the course of a game is not easy to do, so care must be taken in assigning orders in the first place!

Even though it is a bit fiddly, there is also rules for ammunition and re-supply in battle.  How often is this aspect of a wargame overlooked?  I think I would have preferred a slightly different abstraction, but the way they work in the game are perfectly acceptable.  The mechanics provide organic tactical objectives as Ammunition stores and re-supply happens in game and on the board.  It might become very important to thwart a ammo cart getting to the front, seize a weapon cache, or stop a unit from reaching a re-supply point.

I also enjoyed the Chance Cards mechanic.  Every turn each force draws from a deck of cards.  Half of the Cards are simply “No Effect”.  The other half have randomized events that may occur such as breakdown to play on a vehicle, Increased morale for the one unit that turn, or a change in weather.  These cards are also used to introduce snipers, aircraft attacks, and off-board artillery support.  Considering how difficult coordination was during this period, it seems like an interesting and easy way to build these elements into the game.

Things I Did Not Like
Now of course, it is easy to be a critic.  That being said, there were some parts of the rules I thought were interesting design choices.  Many of these were related to the same things that I liked about the game.  First, this is not a beginner's wargame.  It included some elements that even an experienced wargamer like myself would not be ready for.  For example, it uses a wide array of dice, including a few I had never even heard of.  An “Average” dice?  Okay.  In addition, the rules use written orders, but it never gives very good examples of what these orders should look like, even though it spends considerable amount of time on how to change those orders.

The rules do not have a unifying mechanic the way modern rules do.  Mechanics like always roll for a Target Number, roll under a certain skill, etc.  Instead, it relies on rolling on a number of charts to determine outcomes.  To play a reference sheet would be required, and I am sure enterprising people on the web have made some.  However, a unified mechanic would make the game play smoother and easier to recall.

The game is also based on individual movement and action and not unit-on-unit.  This allows you to break of the LMG or Medic to do one thing, while the rifleman do something else.  Now you can have the LMG or support weapon cover the infantry as they move forward which is good.  However, actions and resolutions are handled on a model-by-model basis. This leads to some fiddly shooting and melee rules.  In addition, there is no unit coherency in this game.  A line officer simply has a command radius of 15 inches, and if anyone from their unit is outside of that range they suffer a morale penalty which impacts their activation/abilities.  The decision to be Individual model based is one that will allow some interesting tactical choices, but leads to excessive fiddling and slow down game play.  I am unconvinced the trade-off is worth it.

Finally, I am really disappointed by some of the abstractions made to emphasize maneuver in the game.   One of these weird things is that walking and running do not produce that big of a difference in movement rates.  Plus, movement for all troopers is individualized and partially randomized.  Therefore, troopers are moving about 10 inches walking and about 14 running.  Meanwhile, a pistol has a range of 8 inches, while Heavy machine Guns shoot 30 inches!  That is a level of abstraction I do not agree with.  A man can run half the distance a HMG shoots in a turn!

Meh and Other Uncertainties
My final nitpick is activating units is not 100% clear to me in the book.  It seems like both players choose a unit to activate, and then make opposed rolls based on the units Initiative.  The winner gets to use their unit.  This process continues until all units get activated at least once.  I like the idea that play is opposed activation, however after reading the relevant rules a few times I am unsure if that was the intent or something else was intended.

I would also have liked a bit more in the scenario section.  Th book only details one and it feels a bit like a mini-campaign of three linked games.  I would have liked a few more.  However, the approach of this game is to do your research on the forces involved and scenarios for yourself.  I can appreciate this style, but amplifies the Retro feel of the rules that the Designer's Notes emphasize.

The rules also come with a few Chance Cards, but for the most part you are encouraged to make your own that fit the scenario you are using.  I would have liked a few more and diverse samples to help get my creative juices flowing.

Final Thoughts
I bet if I went to Mr. Eaglestone's place and played The World Aflame with his mates, I would have an absolute blast.  That being said, there are certain design decisions that I would have asked to be done differently.  I don't feel that I will personally play these rules as the focus on charts and Individual model based mechanics are not my preference.  However, I will probably incorporate some of what I learned into my own efforts such as the Initiative Rules (My interpretation of them anyway) and the idea of Chance Cards, especially triggering certain off-board support choices.

If you have tried or read these rules let me know what you think?
Posted by Blood and Spectacles Publishing at 6:40 PM