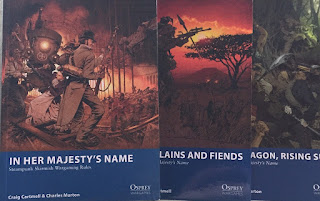 This was one of the earliest books printed by the Osprey Wargaming series.  Unlike other games in the Osprey series, this one has two supplements as well.  I will be reviewing all three of the books in one swoop!  This book was made by the same guys who did In The Emperor’s Name that some of you may be familiar with as it is set in the Warhammer 40K universe.  The writer's have also made a skirmish Samurai game called Daisho, and a dark ages skirmish game called Blood Eagle.  All of these games seem to use very similar mechanics.

So, this game starts with about a page and a half of background about the world of In Her Majesty’s Name.  It is enough to give you the flavor, but it is just a skeleton for you to build off of.  This is what builds the basics of the setting and your Adventuring Company.  The game is firmly in the Victorian Sci-Fi category also referred to as Steampunk.

Unlike some of the other Osprey games, it does not begin with or contain any designer’s notes, so it is harder to determine if the game successfully met its objectives.  However, based on the design and mechanics I can make some sweeping assumptions.  For example, this game is a skirmish game with some heroic elements.  I.e. named characters are better than the average dudes.  This tells me the game has some cinematic and pulp elements.  The size of the Adventuring Companies tell me this is supposed to be a skirmish game as the scale is one-for-one.  Etc, etc, etc.

So, let’s get into the heart of darkness of this review.

Things I Like
The game has a small number of stats such as speed, fighting value, shooting value, etc.  These take the form of modifiers to a d10 dice roll.  However, they are also proto-dice pools.  If you are facing multiple opponents or have certain abilities you can spread those modifiers across multiple opponents.

For Example, Lt, Napier of the British Rifles is facing two natives.  He can choose to split his Fight Value of +3 across both opponents, or focus all +3 on one guy.

In addition, there is an interesting mechanic to volley fire or mob up on an opponent to make sure that everyone has a chance to hurt someone else, even if they have a superior value.  Therefore, quantity has a quality all its own, and the characters will not overwhelm the regulars if used appropriately.

The game also comes with a fun selection of equipment, armor, weapons, mystical powers, abilities, etc.  I could see a close-knit game group having a lot of fun making up new stuff for their own character’s/retinues.  The game has a point system and encourages this approach.

The initial book has some nice artwork and good mix of pictures.  It is evocative and makes me want to play this game.  Once you get beyond the main rulebook and into the supplements the art drops off considerably and forget pictures of minis and games.

Things I Do Not Like
Like Ronin/En Garde the game seems interested with resolving all hitting/wounding in a single die roll.  Therefore, you roll the dice, add your stat modifier, add a weapon stat modifier, and subtract defense modifiers, and target armor modifiers.  That means, each shot requires you to know 4 modifiers when you roll the dice.  Good thing that this is a skirmish game as that would be rather cumbersome.

Here is why I am not a fan of this approach.  The only activity is made by the attacker.  This removes agency from the defender and they basically stand there while the attacker does everything.  I would prefer an opposed dice roll as that requires both players to be engaged in all parts of the action.  Now, one player is active, while the other is passive.  That is not ideal.

Once a hit occurs, the target can make a Pluck save, which if failed equals Out-of-the-Game.  This does allow your opponent to do something in your turn.

The game also has a basic campaign system and a few simple scenarios.  One critique is that the scenarios are very kill’em all style, which limits their scope for campaign/story play.  I think this is a big flaw, as that should be one of the biggest strengths of this system.  I don’t think this was due to space limitations as In the Name of the Emperor has similar set-up

Meh and Other Uncertainties
The game has a lot of great ideas for players to build off of.  The supplements cover adventuring companies from Europe, North America, Asia, Africa and India.  There are some gaps as South America had some cool stuff going on at the time, and there is nothing about Australia.  However, the point system means creative players could delve into those areas.  Plus, the retinues and rules cover animals, vehicles, magic, etc.  It actually covers a lot of ground in a few hours reading time, but still leaves room for you as the player to build.  I like that in a game and it leaves scope for some story-telling.

The rules are alternating activation within each phase.  The first player moves a model, and then the next player moves a model and they trade off back and forth until all movement is done.  Then the group starts shooting, then fighting, etc.   I think this is a good approach as companies tend to act as a unified group.  If it had been alternating activation where each model completes all of their actions before moving on, the Companies would act too independently.  This was a good design choice.

Final Thoughts
I am a bit disappointed in this game.  There is so much cool flavor and potential, but the mechanics just don’t deliver in a compelling way.  I really, really want to like this game, but ultimately I don’t think I can fully recommend it.  The lack of opposed dice rolls and morale system leave me underwhelmed.  In addition, the strength of this game should be story-telling and campaigns but it just doesn’t deliver.  With the points builder system, you could make some very flavorful and fun Adventuring Companies to have campaigns with, but the weak campaign system leaves me wanting.

However, with the right group willing to put some time and energy into this system, you could have an awesome series of club games.  If you merged In Her Majesty’s Name with some of the GW Specialist Games campaign systems (probably Mordheim)  you could have a really amazing system.  I am hoping that Osprey releases another supplement for this game that covers campaigns in more detail as that would really help this game a lot.  The current supplements only add more Adventuring Companies and some additional rules around animals/boats, but not much to the core mechanics or campaign system.  I would like to see more leveling up, base-building, an injury chart, resources/clues, and hiring mercenaries.  You could even add Blood Bowl style dirty tricks and the like.

I want to give this game a good outing with my group, but I doubt I will.  I don't know if I want to devote the time to building the campaign system or painting the miniatures.  As it is, it has some interesting flavor and background, but I need more than just flavor in my games now-a-days.  Despite having three supplements, the game still feels like it is missing some key components.  I could see having a short campaign night or a fun event game, but I don't think it will become a staple of my gaming.

There is also an additional supplement on the designer's blog for In Her Majesty's Name: Gothic.  You can find out about it here: https://inhermajestysname.wordpress.com/ihmn-gothic/

Posted by Blood and Spectacles Publishing at 7:26 PM