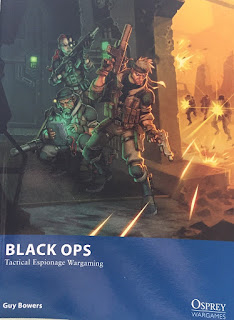 Black Ops is a set of modern wargame rules from Osprey Publishing.  Unlike Force-on-Force or The Face of Modern Battle, this game is focused more on small unit actions between covert organizations.  This is to be modern and near-future experience of low-intensity conflict.

The introduction lays out the heritage and evolution of the game which I found very interesting.  The game initially started as a WWII commando games, then a ninja game, and then a game of spies and special ops.  The designer was influenced by Warhammer Historical, TwoFatLardies, and Studio Tomahawk rules for mechanics, and wanted the capture the flavor or espionage video games and movies.  Using that as the guide, the creator laid out the following specifications for his rules:

With the design specs in place, let’s see if they succeeded…

Suppression is a big deal in this game.  Firing to suppress is easier than shooting to kill.  Each hit adds a suppression marker on the targets, which can be people or places.  A model subject to suppression can choose to take the hits, stay with their head down to avoid them, or retreat away and avoid getting hit.  Therefore, the shooter and the target is faced with important tactical decisions in the shooting phase.  The shooter must decide if it is more important to go for kills or suppression, and the target has to decide whether it is more important to keep models in the fight or simply avoid the fire.  This is a clever mechanic, and the fact that you can suppress an area is an interesting feature.

Facing is also very important to the game.  Models can only see in their front arc and fire in that arc.  Therefore, it is possible to sneak up on or flank opponents.  Moving reduces their ability to shoot and any time you touch a model it is considered a move.  Therefore, careful maneuver and facing is critical in this game.  You can’t just willy-nilly place guys on the table.

The campaign system is part of the game itself.  As each side accomplishes missions, they potentially gather INTEL.  The RED team is trying to carry out their plans, while the Black team is trying to stop the plan from happening.  INTEL can be used to be the attacker/defender in a mission.  In addition, INTEL can be used to trigger a cinematic Final Battle scenario.  The specifics of the scenario are not laid out, but they outline the mission criteria and encourage you to get creative by offering up the climax of several favorite Bond movies as a guide.

This rulebook has some great art.  Some of my favorite from the Osprey Wargames line yet.  There was an amazing ship board in the rulebook too.

The way they have the modifiers set-up in the book are a bit confusing and counter-intuitive.  The designer himself is up-front about it in the text.  Negatives are positive and pluses are negatives.  Huh?  I know other systems have used a similar method, but I still find it a bit odd.

Vehicles use a off-table/sideboard template for who is where in the vehicle.  Granted, vehicles seem like an after-thought in the game as the focus should really be on infantry vs. infantry.  There is also a few pages dedicated to board set-ups used in the scenarios that I found unnecessary and non-value added that would actually hamper the replayability of the rules.

Finally, most Close-Combat resolution is pretty straightforward, but the case of ties was a bit unwieldy and wordy.  It involved what gear who had and what type of environment they were fighting in.  Thankfully, ties shouldn’t happen too often.

The basics are similar to the old Necromunda missions that involved sentries, except it is harder to raise the alarm.  AS attackers do things, they accumulate “Noise” markers that make it easier for a guard to potentially detect them and investigate.  A detection does not automatically raise the alarm, it just allows a guard to investigate further, which raises the chance that the attackers will be detected using Observation rolls.  Even if a guard does detect an attacker, he can only shout “intruder Alert!” which increases the Noise markers on all attackers and makes detection and investigation more likely.  Only a defending commander (referred to by their activation card as an Ace) can fully raise the alarm.

How can I place the Heart of the game system into the “Meh” section?  Well, I think this system will be really fun and exciting for the attackers, BUT it will leave the Defenders at the whims of random dice rolls.  I can’t imagine this is too fun.  I recall my experience with Sentries in Necromunda to be a bit frustrating.

Another big component of the game is the card-activation system.  This was a key component of the design to add some randomized activation to the game.  It is intended to add to the tension of the game as each player flips a card to see who and what can activate next.  Aces are for special characters and leaders, Kings for Heavies  with big guns, Queens are for Specialists like Hackers, Medics, Femme Fatales, etc., Jacks are for rank and file, and deuces are for civvies.  The colors denote which player will get to (suits for multiplayer games) be activated.

On first glance it seems like fun, but then the mechanism leads to some rules creep.  You have the opportunity to reserve an action for a model.  This allows them to act out of normal process.  Then, their need to be rules for groups of models acting together, and then rules for groups of models that are different types (Aces, Queens, Jacks) together.  I feel a different activation mechanic could better handle this process, perhaps by designating groups/fire teams/squads “code Names” that correspond to the cards with the opportunity single models to join/leave groups by discarding their card?  The system feels a bit forced as is.

The back has a selection of forces you can use and even a “build your own” point calculator.  I appreciated that add to allow for customization.  The factions are appropriate and include police, spy agencies, criminals, Mercs, Ninja, and more.  There is really only one “near future’ technology chart which many players will find disappointing, but space is limited.  I would have preferred the boards section to be replaced with more near-future/cyber-tech style gear.

The game’s stealth missions do offer something that you don’t really get in Force-on-Force or other  Modern wargames.  Without those Stealth rules, these rules would not have a hook.  The designer listed their design intents, and I will add if I feel they succeeded.

1. 2 (or more) players- Check, BUT in Stealth missions the Defender doesn’t get much to do.
2. Fast-play- Check- They game seems pretty quick and easy.
3. Card activation- Check, BUT I feel like the implementation needs more work
4. Campaign system- Check!  I liked the natural progression to a climatic fight, very cinematic and video game inspired.
5. Focus on tension building- I think the tension is mostly one-sided in Stealth missions.  Again, the defender doesn’t have much to do until the alarm goes up.

Sadly, I don’t think I can call this game a complete success.  The design specs were met, with some significant caveats.  I can’t shake the feeling that the card activation was shoe-horned in instead of growing organically from the system itself.  Also, the Stealth missions are the heart of the game, and I was frankly a bit underwhelmed.  The Defender role could have been automated and the game made into a solo-play game.  I would have actually found this approach much more interesting to see how the designer could get the game to play Post-detection without another player.

Overall, for $15 bucks it is okay, but I don’t see myself playing it anytime soon.  I would rather play a game where my pals can be more involved in the outcome.  I think this could be a fun convention game where the players who signed up were the attackers vs. the GM who was the defender.

Let me know your thoughts about the game below and feel free to add any links to battles using the rules.  I would love to see them!
Posted by Blood and Spectacles Publishing at 6:32 PM