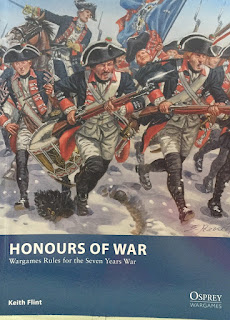 Honours of War starts with a pair of quotes.  One from Donald Featherstone (Charles Grant, J.P. Lawford, and Peter Young also get name checks in the book) and the other is from the Dictionary.  The Honours of War is a reference to the privileges given to a defeated army in the period covered.  I found that interesting.

This is Osprey Wargames 11 in the Osprey Wargaming series.  The focus for this game is Horse and Musket battles in the Seven Years War specifically in Europe.  The author is very clear about the scope and limit of his rule set upfront in the introduction.  The intention of the book is to provide simple, straightforward rules with few gimmicks to be used with any scale figures.  It is intended to be used for small actions up to recreating large battles of the period.  Unlike other Osprey rules I read, this one contained a Ground Scale and Time Scale to them, making them a bit more “strict” than some of the other games in the series.  One turn equals about 10 minutes, and 1mm equals a pace.

As I read through these rules, I instantly saw some similarities between these rules and Blackpowder, another Horse and Musket era game.  This makes sense, since both rules sets cover the Horse and Musket period.  However, there were also some significant differences.  For example, the emphasis on this game is linear warfare.

Things I Liked
This game uses Brigades as the standard operational size, and actions are carried out by Brigade rather than Battalions.  This is similar to Blackpowder.  However, unlike Blackpowder, the Honours of War system uses alternating activation by phase.  So, a Brigade is activated and moved, then an opposing Brigade is activated and moved.  Once all Brigades have moved, then there is alternate activation to fire and once firing is complete, there is alternate activation for melee.  This is followed by a rally phase.

At activation, a Command Roll is made, and a particularly skilled unit with a good commander may get more than one standard move.  On the other hand, unskilled troops with poor commanders may get to do less.  This is in contrast to Blackpowders system of “push your luck” commands with failure turning over play.  In addition, Honours of War is less likely to have a mishap.  In all, I like this approach as it feels like there is less random fluctuations during the battle, but can still model poorly led or inferior troops well.

In addition, this game does not use model/base removal.  I find this to be a positive in Horse and Musket games representing large blocks of men.  You wouldn’t see frontage or unit size really change due to casualties, but instead they would simply waiver and break.  This system represents this well with a hits system that is also similar to other Horse and Musket games.  Units seem a bit less fragile in this game than Blackpowder as they can take a few more hits.  However, they still can dissolve rapidly under concentrated firepower/melee if localized force concentration can be achieved.

In the Rally Phase, units far enough away from enemies or close enough to the Army general can peel off hits to represent them re-ordering themselves.  Therefore, pulling a unit out of the line and moving them back could allow you to rescue the unit, but at the cost of opening a dangerous gap.  In addition, after a certain amount of hits, a unit will withdraw on its own.  This means the placement of your General can be important to the outcome of a battle.

The way a General can boost the abilities and peel of Hits from units means their placement is important to the game.  I enjoyed this aspect of Command and Control.  You have to commit your general to the point of decision.  A small element, but one I enjoyed.

Finally, I always appreciate a game that has diagrams to explain likely situations faced in linear warfare games and how to resolve them in this system.

Things I Did Not Like
I was not overly excited by the “To Hit” table that compromises much of the core of the game.  For one, it uses an Average Die as the key dice.  This is good to avoid extremes, in 20+ years of gaming, I have never even come across one of these before.  I see this as a potential barrier to game play for little gain in the mathematics side of things.

In addition, there is a long list of “If this, than this” type of modifiers to the results of the Average Die to determine the actual number of Hits accrued.  Without a reference sheet, these could be difficult to recall.  Most are “common sense” but we all know how common that is.

I am also not sure about how it handles hills and the “crest” of hills.  I know this is an important point in many linear warfare battles, but I could see it leading to fiddly and annoying player disputes.  This is a small nitpick to be sure, but I also know how players can be sometimes.

Dealing with limbering/unlimbering artillery seems like a pain, but probably something a game in this period needs to cover.  It led to a lot of those “if this, then that” type of situations that litter the rules.  However, the game is trying to reflect the tactics of the time, and Linear Warfare did have a distinct “paper-rock-scissors” feel to it at times.

Meh and Other Uncertainties
Each phase begins with an Initiative check to see who wants to choose to activate first.  Therefore, the force that moved first won’t always shoot or melee first.  That keeps things interesting as you cannot rely on the Initiative staying as it was before.  Although, some armies get minor bonuses on these roles based on the force they represent.

Units and commanders have different ratings that have some impact on how they receive fire, give orders, and rally.  Better units can also change formation faster than lesser quality units.  It is a simple and easy way to distinguish elite vs. militia types.  The same is true of the Officers classifications.  However, a dithering general would be a severe handicap and it is recommended against using it by the writer.

The rules have a nice section detailing how to use different scale models, National Differences (Where the Prussians get some clear advantages but nothing game breaking), and some though on how to use Imagi-nations.  The rules also cover a points system for pick-up and play vs. scenario games.  There is also some discussion about weather and non-standard unit sizes.  These help round out the rules, but the lack of a campaign system saddens me.  Of course, the rules can only be 64 pages and there is a lot of material crammed in all ready.

It comes with 4 scenarios that range from skirmish up to full scale “bathtub” battle.  I like the focus on smaller scale combat in the rules which allows you to build smaller forces and have a type of “escalation” approach to the time period.

Final Thoughts
I am no expert in the period, but I feel I could easily pick-up and play this game successfully in an evening.  The fact that it allows for and encourages La Petite Guerre is a plus in my book.  The way the game is played allows for player interaction without long periods of inactivity and allows players to “react” to the actions of their opponents Brigades.

Upon initial review, it feels like this game would allow more army wide control with slightly more durable units that rewards the placement of the overall commander better than Blackpowder currently does.  Honours of War lacks the “Push Your Luck” mechanic that can make it feel more cerebral and less based on the frictions of war.  That said, this can be an attraction to some players, and feeble commanders with feeble units will still perform poorly on the field compared to dashing commanders with superior units.

The designer set-out to create a simple game straight forward set of rules that covered the period in question.  Based on these guidelines, I would call this game a success.

Posted by Blood and Spectacles Publishing at 2:17 PM