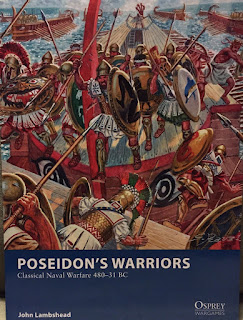 As the cover implies, this is a game of Ancient Naval warfare focusing on galley and trireme combat.  To my knowledge, this is the second naval focused game in the Osprey Wargames series of rules.  The first was the [b]Age of Sail[/b].  At a stretch, you could also include [b]On The Seven Seas[/b] as well.  They game is intended to have minimal record keeping, allow for feints and traps, and to move at a rapid tempo.  This is intended to be a relatively rules –lite game.  So, let’s dig in and see how they do!

Things I like
When they were talking about rules lite with minimal record-keeping they were not kidding.  The basic rules are very streamlined, and focus on using alternate activation where the active unit can complete all actions then the opponent chooses to activate their own ship squadron.  This is a fast moving approach, and allows for the feints and traps that the designer intended.  This is similar to other Naval games such as Dystopian Wars.  One down side of this approach is that the fleets tend to act in a less coordinated way, however it is a simple mechanic that allows what the designer intended in the game.

Dice-rolling is very simple, and there is very little record keeping.  Most of the ancient ship types will be rammed and sink pretty fast.  Once you get into the Diadochi/Successor/Hellenistic era, it slows down a bit due to the up-scaling of warships in that era.  However, the stat lines are still easy to keep track of with only about 4 stats, Speed, Hull, Oar banks, and Marines.

It covers all the basics such as grappling, boarding, and counter-ramming in a satisfying way.  To ram, you come in contact and roll a 4+ on a d6.  You can then grapple with a d6, and potentially board.  Boarding is an opposed roll.  The advantage goes to the side with more marines.  This game was intended to be quick, and looks pretty quick.

The booklet has a great piece of terrain of a Hellenistic port in 1/ 1200 scale that is really cool!  It also has many cool pictures of 1:300 scale triremes.  However, the game is really designed for 1:1200.  The artwork is also very nice and evocative of the game.

Things I Did Not Like
The game has rules for Oar-strikes which is good as they were a favorite tactic of more advanced naval powers.  However, I don’t really see the point of them.  The rules allow you to minimize the speed an maneuverability of an enemy ship, and eventually immobilize it.  However, it is much more effective to simply ram them and board them.  I see no reason to Oar-strike in this game.  You do not get bonus Victory Points for capturing ships, but the rules do cover how to capture and tow “prizes” away.

Now, this could be pretty accurate based on my limited knowledge of Naval Warfare in the Ancient world.  Frequently, skilled Naval forces trying those fancy tactics ended up losing to brute force.  Yeah Carthage, I am looking at you!

Meh and Other Uncertainties
Smaller ships are in groups of 5, mid-range groups of 3, and big ships are lone ships.  They act independently.  These are the operational groups, instead of independent hips.  This seems a good way to allow larger looking fleets, but still have a quick game.  Plus, I could see building up two forces of 1:1200 galleys quickly and cheaply.

The advanced rules allow you to try and customize a period specific force, and many of the Historical scenarios and admirals make use of these advanced rules.  There are also basic rules for terrain, underwater obstacles, shallows, etc.  However, the basic game play is still very straight forward and simple even with the Advanced Rules.

The Osprey Wargaming series of books has a very tight 64 page limit.  This is the first one in the series where I feel like fluff was added to bulk out the book, rather than items being cut-out to fit the page count.  The rules are that streamlined and easy.

Final Thoughts
This is a quick, easy game that does what it says on the tin.  I think people who are more knowledgeable about Ancient Galley warfare will be disappointed by the lack of sophistication in these rules.  However, for most casual players they will do just fine.  I could see myself pulling this out with people who know next to nothing about wargaming or history and having a quick, satisfying, fun game.
Posted by Blood and Spectacles Publishing at 6:58 PM