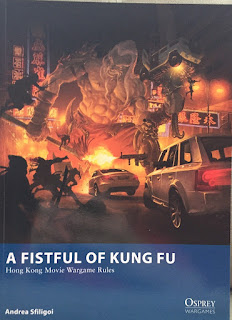 This is another of the Osprey Blue Books from their war gaming series.  The focus of this one is to try and capture the feel of Hong Kong action movies. I have to admit, that seemed pretty broad to me as Hong Kong action movies range from Wuxia, to Kung-fu, to Heroic Bloodshed, and many points in between!  I found it difficult to believe that one book could cover all of that ground!

Then I read more and realized that the game is simply another re-skin of the [i]Song of Blades and heroes[/i] rules a system long on special rules to create flavor, but broad in scope.   Therefore, some of what I have to say about this ruleset covers the parent one as well.  Each of them have a few of their own twists and turns though.

What I Liked
I really enjoyed the fact that this game had a lot of detail about the setting of the games and how to “use” the settings to create more dynamic action.  In miniature games, it is all too easy to simply move forward and fight!  However, in this game there are all sorts of cool and cinematic things you can do with setting itself, all culled from the big screen.  For example, you can take a block of Ice at a fish market, and use it to extend your movement by using it as a skateboard.  Not bad fitting those rules into a 64 page booklet!

I also liked the fact that combat results are on a scaled basis.  The combat is an opposed roll, which is my preferred method.  However, the effects of the attack are on a sliding scale based on how well you out-performed your opponent.  Therefore, the more you beat them by, the better the result.  Plus, it allows you to do more than simply take an enemy model out of the fight.  You can stun them, knock-them back, wound them, pulled down their pants and humble them, etc.  In fact, in a few scenarios, you must Humble your foe before you can finish them off!

Finally, the Song of Blade and Heroes initiative system is a decent Risk vs. Reward and Push Your Luck style system.  When you activate a model, you can roll 1 to 3 dice.  For each success you gain, you can act.  For each failure your opponent may react.  Plus, too many failures results in a turnover of activation.  I would like to see this in practice, but in theory it means you have to weight how much your model really needs to do and choose accordingly, AND both players are invested in the results of the roll.

Things I Do Not Like
I hate the level of abstraction in these rules.  I know it is cool and in vogue to limit stats and use Special Abilities instead, but man this game take sit too far in my opinion.  You use your Quality rating to do anything that isn’t fighting, and Combat to do anything that is fighting.  Therefore, your Hero Cop can shoot and do Kung Fu as well as a Wuxia master, and your Wuxia master can theoretically shoot just as well as the Hero cop.  Plus, models who are Q2, C2 will be better than everyone at everything all the time.  I can sort of let that slide in a game like Fistful of Kung-fu due to its cinematic nature, because Extras in movies die by the bucketful.  However, as an overall mechanic I just can’t stomach it.

Plus, that leads me to the other drawback of the system.  Pages and pages of special rules!  They all have cutesy names too!  This seems excessive to me and an overreaction to the over complicated stat lines of ages past.  There is a balance between the two extremes and [b]Fistful of Kung-Fu[/b] does not have it.  You will want detailed notes for your models to make sure you know what does what, but you also need detail notes on the terrain (as it all has special rules too), weapons,  and know what your opponents can and can not do.  I know this is the fashion at the moment, but it really is a trend I do not like.  Every model doesn’t need 4 special rules to make it unique!  If you had a differentiated stat line you wouldn’t need to have so many special rules.

I feel like they are using special rules to create flavor instead of making mechanics to add flavor.  For example, the mechanics for combat allow you to do many things to your opponent in a flavorful way by outperforming them with degrees of success.  No special rules (as they are baked into the mechanics) are needed to add additional flavor or capabilities.

Also, what is the deal with only straight line movement allowed?  If you are moving blocks of troops around, sure that makes sense.  These are individual people doing things.  The straight line only movement is weird and ‘gamey’ to me.

Finally, I love the use of terrain as a “prop” for the action and more than just cover.  However, that means this will be a very terrain heavy game.  Thankfully it is only 3x3.

Now, to be really shallow, the game had a very limited selection of terrain and models for the photos.  This is true in other Osprey books in the series, but it really stood out to me in this one.  The shots were of the same 4 miniatures with the same car over and over again.  The Northstar Miniature range for this game is pretty cool and more of it deserved to be highlighted.

Meh and Other Uncertainties
The game has several scenarios again ripped from the silver screen.  They are relatively broad. Have complications, and a small campaign element to them.  They seem to be rather re-playable if a bit generic.  The fun is how you use your models to interact with the terrain to achieve the objectives.

You can use a CHI Level as a resource to perform certain actions like CHI Leaps, re-rolls, and avoid injury.  However, it is a limited resource and must be used wisely.  However, winning games allows the winners to earn more CHI points in a campaign.

Like many of these short Osprey Games, the end conditions are pretty straight forward and lack nuance.  Kill or be killed, with the Morale rules being kind of just there in a sentence or two.

The game has some basic campaign rules and some sample retinues.  Most importantly, it has rules for building your own custom warbands for the game.  So, if you really want to recreate the Eastern Condors or a scene from The Bride with White Hair you can!

Final Thoughts
A Fistful of King-Fu seems like it would be fun to play for an evening or two, but just doesn’t have the chops for serious play.  I have a feeling it would get old and kinda samey feeling pretty quick.  I just can’t see this being a staple game that you replay over and over again.  I think a creative and free-wheeling group of players could have a lot of fun with the system for a short period of time.

Ultimately, the two stats and large list of Special Rules that are the staple of the engine end up being kind of shallow and uninteresting.  The rules lack a depth of mechanics and try to replace depth with chrome.  I don’t see that as being a winning combination for repeat play and the game itself feels all sizzle and no steak.

There are some cool ideas that I will steal for my own games, but overall I was unsatisfied.

Ultimately, it tries to do too much and be all things to all people instead of just being its own game.  I am unsure if this is a criticism of the engine  or specific to A Fistful of Kung-Fu.  I will have to see as I will be looking at Of Gods and Mortals next.  That game uses the same game engine.

Posted by Blood and Spectacles Publishing at 7:04 PM