Review: All Quiet on the Martian Front- Alien Dungeon/Ironclad Games 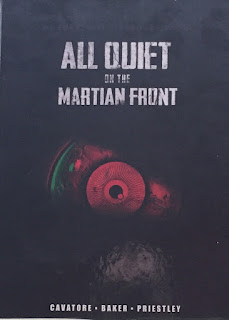 Oh what a strange history this game has had.  It started with a big Kickstarter buzz when the Golden Age of Wargaming on Kickstarter was ongoing.  Of course, the Golden Age turned sour quickly when many companies were typing promises that their companies couldn’t deliver on.  Alien Dungeon and All Quiet on the Martian Front were not the only ones to fall into this trap.  The game delivered some, but not all of its promises and even managed to make it into distribution.  Then, disaster struck and Alien Dungeon closed its doors.  All looked lost for All Quiet on the Martian Front.  However, a savior appeared, and the IP was purchased by Ironclad Games and this game has been resurrected from the ashes!

With such an exciting backstory to the game, what is this game all about?  All Quiet on the Martian Front is premised on the idea that the Martian invasion from H.G. Wells War of the Worlds was just the start of the Martian attacks.  In 1910 they have returned to Earth, and this time they intend on staying.  Much of the U.S., Africa, and the Russian Steppe have fallen to the invaders.  However, the main action is focused around the defense of the Mississippi River Valley in the United States, with the help of the British Expeditionary Force.

The main rules were written by Cavatore, Baker, and Priestley.  If you have been involved in wargaming over the past few decades, those names should ring a bell.  With those names, come certain expectations around the rules.  Let’s see if those expectations are met. 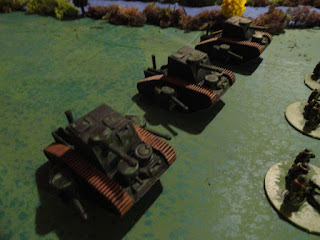 What I Liked
I picked this game up at my local FLGS (Friendly Local Game Store).  They had a surprisingly active group of players from the Historical community that bought into the Kickstarter who played it in store.  I won’t lie the visuals of the game drew me in right away.  The towering Tripod models and the WWI aesthetics to the U.S. Troops really hit my model sweet spot.  The game just looks great on the table.

From there, I dug into the background a bit. I always had a fascination with World War I and the period just before.  The mixing of fact and fiction was just right to keep me interested.  I also liked the idea of hosting a campaign in my own backyard.  I live very close to the Mississippi River Valley.  No other wargame has really let me do that, since my part of the Mississippi has been fairly quiet, well until the Martian Front opened up that is.  So, the visuals and the background drew me into this game big time.

Some Tripods are simply invulnerable to small arms, however once Tripods start taking damage it becomes easier to damage them.  I enjoy this degradation aspect because as the game wears on, formerly invincible Tripods start to look worse for wear.  In addition, the U.S. can throw out a lot of firepower, and concentration of fire is critical.

That leads me to another aspect of gameplay that I enjoy.  The forces are not equal and they are not intended to be equal.  There is a point system, but Martians have better technology than the Humans.  Their wargear is tougher, more deadly, and faster.  However, they are limited.  The humans are subject to morale and are squishier.  They make up for it with numbers, sneakiness, and big guns.  Humans can use something called blip markers and ambush to conceal their forces from Martian invaders.  These mechanics allow the Humans to try to get the drop on the Martians and are another way to try to balance the scales.  There is a point system, but the game really excels at scenario play vs. competitive play. 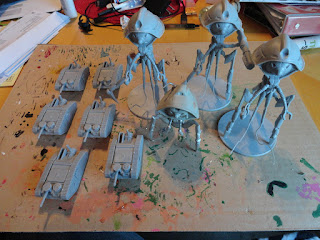 Things I Do Not Like
It saddens me that this game is IGOUGO.  Granted, in the games I have played the turns go relatively quickly.  However, when one side is active there isn’t much for the other player to do except to keep track of what is getting damaged and destroyed.  The game has very little for the non-active player to do.  There is an initiative roll with some mods for results in the past turn, so it is possible that a sides could get a double turn before the opponent can respond.  I would hope that such experienced game designers could have found a better, more dynamic turn sequence.

The Scenarios provided in the book just are not very good or balanced.  They tend to favor one side over the other, and the humans typically get the short end of the stick.  So, if you play as the Humans and not the Martians then be prepared for an uphill climb.

The ease of play is both strength and a weakness.  The mechanics are so simple and easy to grasp that non-wargamers can pick them up with ease.  However, after a few games, the gameplay can get a bit “samey”.  Martians do not have morale, are rarely affected by terrain, and have limited options as they may not use Blips or Ambush.  It is pretty clear what they are going to do, bum-rush or the Martian two-step.

The game tries to add some resource management and depth by using Command tokens.  These can be used to bring in reserves, double move, and other things.  However, the implementation is weak and half-baked.  They could be very versatile and cool, but there just isn’t enough behind the command points to make them add much to the game play. 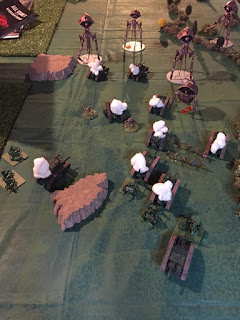 Meh and Other Uncertainties
The game currently has three main factions; U.S. Forces, Martian Invaders, and British Expeditionary Force.  U.S. and British forces have a wide range of units and troops types, and the Martians are surprisingly diversified as well.  The background references possible other factions but they have yet to arrive in game.  Supposedly Andy Chambers was working on the rules for Underdwellers as the next faction before Alien Dungeon died.  I have not heard if Ironclad Games intends to revive that work, or do something different.  The background also hints at French, Prussians, Venusians, Texas, and Canadian troops or armies as well.

Doughboy Infantry can effectively assault Martian tripods using grenades and other gear.  The lowliest U.S. Units still have a chance to damage a towering Martian Tripod, and with the damage table even bring it down.  That makes infantry and infantry screens important which is something that could easily have been overlooked in a game like this.

With the Move-Shoot-Move sequence of play, Assaults fit in a bit clumsily.  Also the morale rules are extremely simplified and only impact Humans.  Forces tend to fight until destroyed or they reach an arbitrary breakpoint in the rules.

The background section gives you enough of a feel to put your battles into the larger narrative of the game very easily.  The do just enough name-dropping to make it feel like a “lived in” Universe, but not enough to be eye-rollingly bad.  Some may question why Steam powered tanks became a thing, and there is some handwavium about oil being to dangerous and combustible against Martian Heat Rays.  However, for the most part I enjoy the background.   Your mileage may vary. 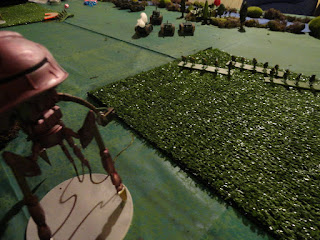 Final Thoughts
This is not a game for everyone.  If you enjoy rigidly balanced games so you can see who is the more tactically skilled player, than avoid All Quiet on the Martian Front like the plague.  It does not have what you are looking for.  For the most part, it is a streamlined game but the mechanics lead to a lack of depth in gameplay.  In addition, the IGOUGO turn sequence is atrocious and an unforgivable sin in the game’s design.  For a game of its scale, I have no idea what Cavatore, Baker, and Priestley were thinking on that decision.  I am not sure I can recommend the game unless you valley the look, genre, and style of the game over the specifics of the gameplay.

Despite what looks like a scathing review, this is one of the games I play the most often.  My family (of all ages) likes to play it with me because of the streamlined mechanics I just bashed.  We can finish a decent sized game relatively quickly.  The straight forward nature of the Martians means that they are easy to pick up and learn so more experienced wargamers can take the U.S. Army and the asymmetrical nature of the game is a feature and not a bug.  Plus, we have been placing the setting locally and that adds to the fun when you are destroying towns we have actually visited.

This is a great family wargame, but not one that I would take down to the FLGS/club or expect to pick-up a ton of steam competitively.  There just is not enough depth for that type of gaming.  It is a much better campaign/scenario game for close-knit game groups/families to explore the All Quiet on the Martian Front setting.

You can find out more here: http://quietmartianfront.com/
Posted by Blood and Spectacles Publishing at 8:16 PM

Email ThisBlogThis!Share to TwitterShare to FacebookShare to Pinterest
Labels: All Quiet on the Martian Front, Battle, Ironclad Games, Review, Steampunk