Last year, my 2017 Goals for Painting were not met.  For 2018, I decided to scale back my painting goals to something more managable.  I really scaled it back since I did not expect to have much time to paint.  My peak painting season is typically Novemebr through March.  This year, that did not happen do to pesky "Real Life" commitments getting in the way.

This blog is primarily about designing and playing wargames.  However, part of what makes wargaming a unique experience is the tactile and visual spectacle elements.  That is what drew me to wargaming in the first place.  It is no secret, I am not a great painter and do not really enjoy it much.  I am not above using paper templates in place of miniatures.  However, when I do have models I typically do not play a game with unpainted models.  It is a wierd quirk.  I am fine using paper templates or toys, but if I am playing with wargaming models I want them painted!

So, to that end I have been doing a bit of painting.  Let's see my progress.

You may recall these two models that I picked up when I purchased Pulp Alley.  They are a Red Queen and D.A. Thompson model that I intended to use in Turf War, Mad Dogs with Guns, Pulp Alley, or even Strange Aeons. 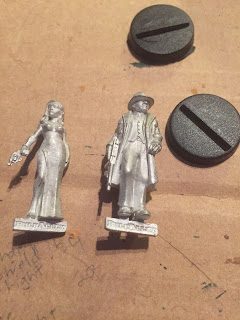 I managed to get paint on them.  Nothing spectacular, as I am not that good of a painter. However, they are now ready to hit the tabletop. 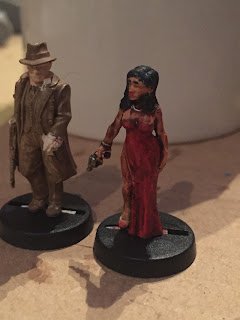 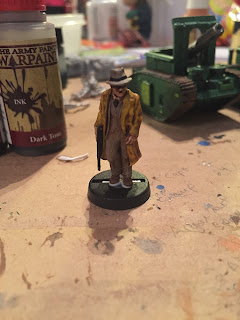 Besides these two, I also painted up some Mobile Artillery for All Quiet on the Martian Front.  These had been sitting in the silver and unassembled on my desk for sometime.  I think since late 2016!  They finally got a coat of paint. 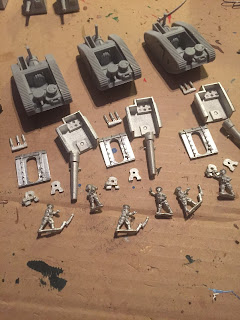 My main base coat of dark green went dry so I had to make do with some other colors.  However, you can see that they turned out just fine after some Dark Tone washes. 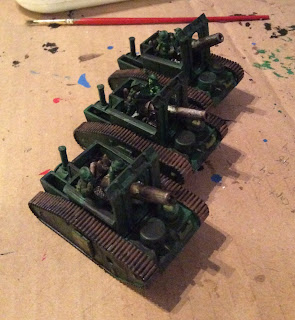 Finally, I also went back to some of my Crusader Gladiators.  I had been putting them off for sometime as I don't like painting horses.  The chariot horses did not turn out great, so I put off paintingthe Equites on horseback for a long, long time.  Probably longer than the Mobile Artillery even!  However, now that they are painted, I can use Equites Gladiators in The Games: Blood and Spectacle games.  That will be fun! 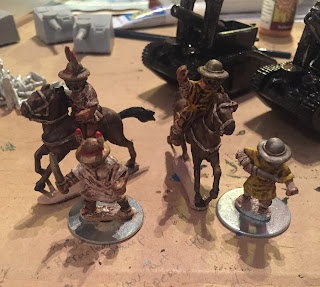 They have a mounted and dismounted version now too.  I actually painted the dismounted guys a long time ago to act as Damnati and Noxi models too.  For Gladiator games they will prove versatile, plus I can use them as a Sons of Spartacus faction in Broken Legions. 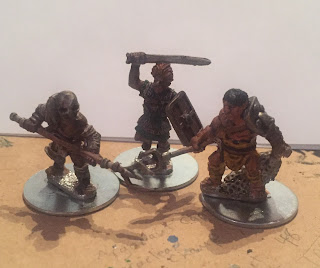 I really need to stop taking iphone photos from my basement at night and expect them to come out!  These are a pair of Retarius and a Noxi for my Gladiators.  They are also from Crusader.  The Retarius with the iron mask... I actually have no idea what he is.  He doesn't have a net and he doesn;t have a trident... so I think he is something from the movie Gladiator with Russel Crowe i.e. some made-up Hollywood gladiator type.

That actually sorts my 2018 Painting Goals plus a few models more!  Wow, anything else I paint is gravy!