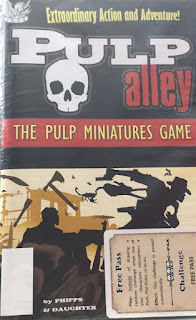 Pulp Alley is a skirmish game designed to recreate the adventure of serials and cheap paperbacks.  This is commonly referred to as Pulp Gamin, and often takes place in the inter-war years between WWI and WWII.  In addition, Pulp Gaming often takes place in exotic locales, have two-fisted men-of-action, villainous scientists, gangsters, and femme fatales.  It is the stuff of Sam Spade, Indiana Jones, Sky Captain, and Doc Savage.  With that you have an idea of what the game is trying to recreate.

I was first exposed to Pulp Alley after playing some games of Super System 4thEdition.  I briefly toyed with the idea of picking up Chaos in Carpathia or Chaos in Cairo.  While researching these two titles I stumbled across the Pulp Alley game.  I heard people mention some interesting mechanics in the game system, and I became very interested in learning more.  It seemed like it had some of the mechanics that I enjoyed.

Each [layer creates a League of characters for the game.  These can have some generic archetypes that give League wide bonus, and then there are a few character types of different skill levels.  Each League is typically run by a Hero.  The Hero then has a collection of followers and sidekicks.  Think of Indiana Jones, Short Round, Professor Brody, and Henry Jones all working together as a League.

This sounds like fun to me, so let’s dig in and see it if delivers.

Things I Like
This game has an interesting Initiative system.  The player with initiative can choose if he will activate a model or the opponent.  The player maintains it as long as the opponent does not complete an objective (plot Point) or outright win in a fight.  If one of those things happens then initiative passes to the other player.  If you want the other player to activate they can choose any model in their league so there is an element of risk.  Go first and do what you need to do, or let your opponent and possibly lose the initiative.  Decisions are good!

Models use a dice poll with a dice shifting mechanic.  This is similar to Force-on-Force.  A 4+ on any dice size is a success, but some things will require more successes than others.  For example, to solve a peril or Plot Point you might need to roll more than one success.  In addition, a model’s Health is also a Dice size, as you are injured the dice size is reduced and no dice pool can be used with a dice larger than your injury dice.  If you dice shift below a d6, you are unconscious or out-of-the-fight.  This is a clever mechanic to give models more than one injury but reduce effectiveness due to injury.

Finally, the game uses an opposed dice roll called Dice Matching.  Both players role the Model’s opposed dice pools and compare the number of successes.  However, if you roll a success with a result equal or better than an opponent you can cancel the result.  Typically the attacker can match, and that allows him to decide how many wounds he wants to try to inflict at a cost of receiving how many back.  Therefore, you are forced to make decisions about how much punishment you are willing to take vs. receive.  Decisions are good.  Dice matching is also used in other opposed tests as well.

Things I Do Not Like
Each player draws cards from a Fortune Deck.  These are used when an opponent activates a model.  You can use it to force them to make challenge rolls.  If succeeded, the model may continue but if failed they make take damage.  This could be anything that fits the narrative.  It can also be used to make terrain features perilous to cross without a test, securing an objective (Plot Point), or complicating an action.

This is a good way to force decisions on both players and keep them engaged in the game.  So, why do I not like it?  There are three reasons.

1.       The game uses a number of different dice sizes to resolve actions.  A deck is just another form of resolving or forcing actions and clutter up the mechanics away from the core mechanic.
2.       I didn’t buy the deck when I bought the rules as I did not know I needed it.
3.       The challenges are rather abstract and boring.  The detail needs to be added by the players.

This game is designed to be played player vs. player and the Fortune Deck is the mechanic that allows it.  However, this game would play best with a GM.  That way the abstract perils and challenges could be defined by the GM.  This would ideal, but most gamers are lucky to find a single likeminded individual much less a GM too.  I can see why they tried to bypass needing a GM.  Personally, I think this game would be really cool as a League vs. the GM type game too.

Meh and Other Uncertainties
The game comes with a number of scenarios in the book.  This includes plot point placement, special events, deployment, terrain, etc.  Everything you need to get playing.  There are 6 scenarios and give you a good idea of where to start.  However, I think this game would shine with custom scenarios instead.  The scenarios recommend 5 plot points, but this seems like too many on such a small boards.  However, season to taste.

The scenarios also allow for some basic campaign enhancements.  I am sure the supplements go into this in much greater detail, but the main books gives you a basic system to get you started.

The rules themselves are bound like a comic book.  This is a neat little gimmick to bring home the pulp nature of the work.  The art is stylized and peppered with photos of models in black-and-white.  I enjoyed the design touches to keep with the Pulp feel of the rules.

Final Thoughts
This is a very clever game, perhaps too clever!  It combines dice pools, dice shifts, matching, opposed rolls, deck building, card playing, and an innovative initiative mechanic all in one game.  I will be honest it is a bit overwhelming and feels like it may actually get in the way of the game play.  The dice mechanics alone would make me want to play the game but the deck aspect feels like too much goodness layered on top.  I tend to prefer games that choose a core mechanic and stick with it.

This game would be ideal for a small group of dedicated players who were rotating GMs to make a sort of wargame/RPG hybrid.  That being said, I look forward to trying these rules out using some of my Inquisitor 28 guys.  The system seems like it would be a great system for Oldhammer as well as Pulp Action.  The small model count and board size seem to make it ideal.  Plus it covers investigation on and light RPG on the tabletop too.

If that is the type of game that interests you, then I recommend picking up the rules.  Be sure you also get the Fortune Deck as well.  The rules come with some in the book, but I am sure the deck from Pulp Alley would be worth it.

I am very glad to have read these rules.  There was a variety of great mechanics to look at and think about.  As a designer, it is a good toolbox for game mechanic ideas.
Posted by Blood and Spectacles Publishing at 1:29 AM