Total CARnage: Battle Report- Kill'em All for a MacGuffin 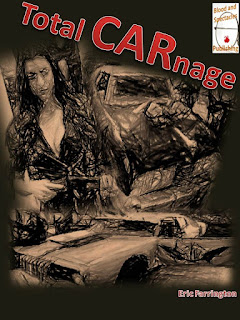 My daughter and I had some time and decided to play TotalCARnage!  We grabbed a few of her old Hot Wheels cars straight from the box, some of my badlands terrain, and quickly decided on our forces.  We played on a relatively small table at 4 feet long by 2 feet wide.   Therefore, we decided to just play a standard Kill’em All style scenario to get started.

Truk Police
A band of wasteland do-gooders in trucks 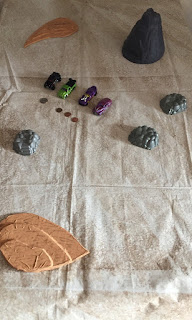 This is a simple Kill’em All scenario.  The side that ends the game with operational vehicles is the winner.

Turn 1:
The two sides move cautiously towards the middle.  However, the Purple People Eater (PPE) with the flames decides to pivot and skirts dangerously near the edge of the board.  No one bothered with any shooting yet as the jockey for position.

Turn 2:
The Flames PPE moves forward and decides to fire a burst of machine guns at the Green Truck.  However, the shots fall short.

The Green Truck rushes forward and has a head-to-head collision with the other PPE car!  Both cars are reduced by 3 hits down to 2 each.  Plus, the PPE car bounced back from the collision.  The Truck also blasts the PPE with his cannon at close range, reducing it to 1 hit! 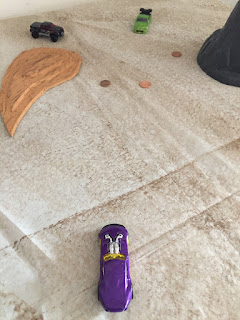 The old PPE car fires back at close range, but misses!  He then pivots and scoots away from the green truck.

The other truck cruises safely across the center of the table with no shooting, ramming, or colliding.

Turn 3:
The Flaming PPE pivots and moves up close to the Black Truck and machine guns it at close range, hitting it twice!  It now has 4 hits left.

The Black truck pivots to go after the nearly destroyed old PPE and rushes in.  However, he accidentally rear rams his friend.  Woops!  This takes the green truck to less than 5 hits and immobilized him, and reduces the Black Truck to 2 Hits!  All is not lost as a cannon shot takes out the last hit from the Old PPE car too.

Only the Black Truck and the Flames Purple People Eater are left in the game now! 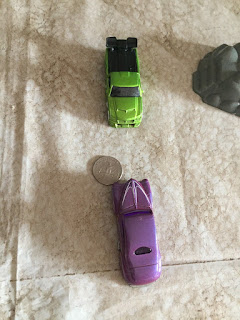 Turn 4:
The two remaining vehicles simply maneuver this turn.  The black Truck tries to slowly extricate himself from the mass of immobilized vehicles while the Flames PPE turns away from the combat to get some distance.

Turn 5:
Both vehicles look to be moving to go around the far sand dune, but neither has the right angle for shooting or ramming yet.

Turn 6:
More driving around.  This time the Flames PPE actually goes backwards!  The Black Truck tries to make a sharp turn, but is too slow.

Turn 7:
The Flames PPE manages to finally get a long distance shooting angle and opens fire with his machine gun.  He manages to snag the Black Truck twice, and even cause him to shift a bit.  The Black Truck is now down to 1 Hit left! 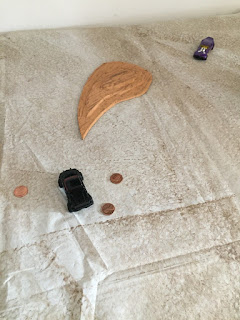 The Black Truck tries to drive away, and comes perilously close to the table edge.

Turn 8:
The Flames PPE moves to get the sand dune between him and the Black Truck.  The Black Truck decides to try some fancy driving and aggressively hits reverse to get a firing angle  However, his aggressive driving is too much as he accidentally backs into a rock outcropping and immobilizes himself!

Conclusion:
The Purple People Eaters win this round!  The Truck Police manage to stay in their immobilized vehicles and fend off the cannibals while they tow their other car away.  It is a long walk for the Truck Police as they head back to their home settlement.

Set-up and Mission- Get the MacGuffin!
The Forces for this mission are the same as the Kill’em All!

A package of rations was set-up in the center of the board between two sand dunes.  The Purple People Eaters set-up with the Old Car ready to race forward to get the rations and the Flames car ready to provide covering fire with the machine gun.  The Truck Police were set-up similarly on the opposite side with the heavy going for the rations.  Truck Police are the attackers.

In this scenario, a car must stop next to it for an activation, and then get it off the board.   Should be fun! 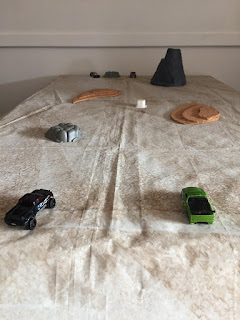 Turn 1:
The two sides move towards the rations.

Turn 2:
The two sides race forward and the lead starts flying!  The Green Truck misses the Old Car.  Meanwhile, the Flames PPE moves up and spray lead at the Black Truck and misses.  The Black Truck rushes up and starts collecting the rations. 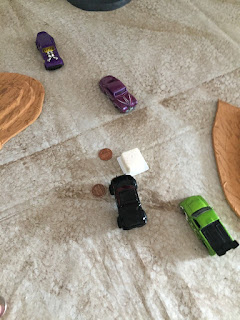 Turn 3:
The Old Car blasts the Green Truck with a powerful cannon shot that sends the truck bouncing back.  However, it comes hurtling back into the fight and returns the favor on the Old PPE.  Both cars are down to 4 hits.

The Flames PPE moves backwards and unloads its machine-gun at the Black Truck, and manages to ping it twice.  It is now down to 4 hits.  However, it also has the MacGuffin now! 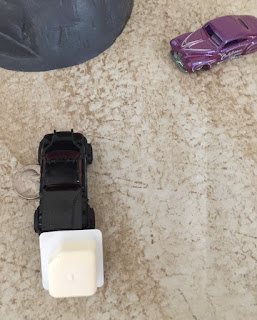 Turn 4:
The Old Car reverses to try and defend the board edge and set-up for a potential side ram on a fleeing Black Truck.  Instead, the Black Truck turns towards the Old Car and tries to muscle past but ends up ramming them head-to-head.  Woops!  Both vehicles are reduced to 1 hit and are bounced around form the impact.

Turn 5:
The Old Car for the PPE backs up and unloads a cannon shell into the Black Truck and immobilizes them.  So much for having the MacGuffin.

The Green Truck backs-up to try and get to the MacGuffin itself and help his comrade.  In his crazy reverse driving he manages to put a shell into the Flames PPE. 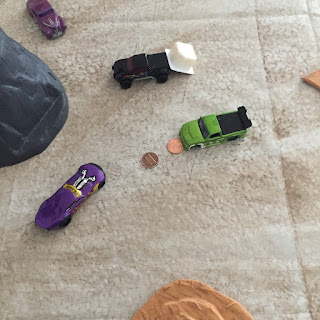 As the flames car moves to the objective, he lets rip with his machine-gun on the Green Truck but only hits him once.

Turn 6:
The Cannibals in the Old Car roll-up and swarm over the Black Truck.  They hoot and holler as they try to steal the MacGuffin.

The Green Truck backs-up recklessly and collides with a dune, but a cannon shot again manages to hit the Flames Purple People Eater car.  Both cars are now at 3 Hits with the Old Car at 1. 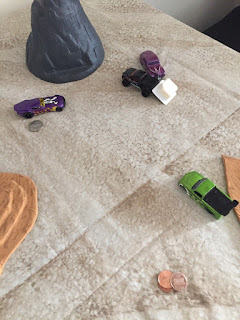 Turn 7:
The Green Truck races forward to contest the MacGuffin from the PPE.  However, the Flames car drives up and machine guns the Green Truck into scrap at close range. 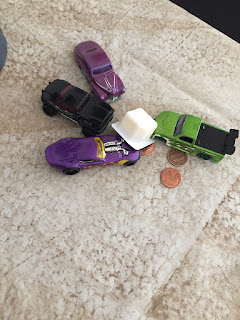 Conclusion:
The Purple People Eaters rip the rations from the back of the Black Truck in triumph.  They hoot, holler, and threaten the Truck Police in their immobilized vehicles before loading back up into their damaged cars and cruising away for a feast!

Final Thoughts
This game was good fun!  It was dead simple to set-up, play, and take down.  The entire process took less than 60 minutes for two games.  The longest part was choosing the forces and setting up terrain.

The Machine Gun was the star of the show in these games, as it managed to chew through the Heavy vehicles armor pretty well.  Long range shots were not easy to pull off, often missing.  Crazy, aggressive driving was often rewarded with crashes and collisions as well.

It will take some time getting used to the way the game plays as you have to be cautious about when to fully commit your forces versus when they need to skulk around and maneuver for shots.  It was also surprisingly hard to set-up a ram that was not head-to-head!

Overall, a fun time was had by all.  If you are interested in trying it yourself, you can pick-up these rules for yourself here: http://www.wargamevault.com/product/208982/Total-CARnage
Posted by Blood and Spectacles Publishing at 1:59 AM