Random: On the Painting Desk- Men of Bronze

I have been working heavily on Men of Bronze since my due date for the final manuscript and 30 Photos are May 31st.  That means I have been doing a few key things:

Some of those things are more exciting than others for you to read about.  Today, I thought I would share some progress shots on the models that will be featured in the book.  Those of you who have followed this blog know I am not the world’s best painter.  Therefore, I am having a friend of mine do the heavy lifting in the painting department.

Below you can see the results so far….

You can see a closer look at some Psiloi- Javelin Men... 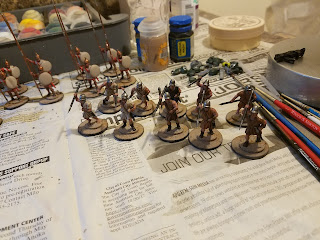 Then, the Macedonian Phalanx.... 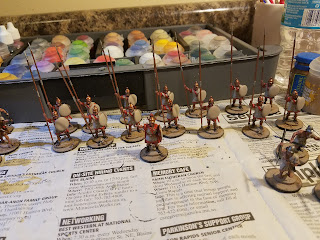 .... you can see the "leader" for this unit in front.  Leaders are important in Men of Bronze for determining movement, charges, and lining up assaults.

Then we have some Spartan Hoplites in front of some Peltasts..... 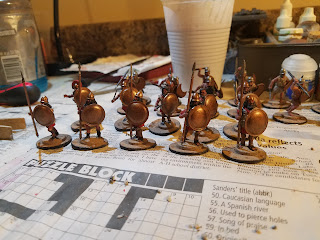 These guys still need some shield decals of the famous Spartan Lambda.  The Peltast will also have some decals on their shields. 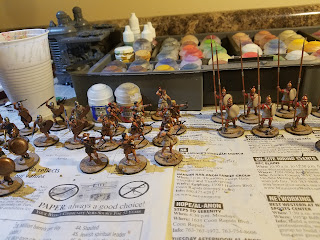 Men of Bronze core mechanics are around shock Phalanx on Phalanx combat.  However, Archers still have their role on the battlefield, and are present in the rules.

These are all models from Victric Limited.  I picked up the Macedonian Phalangites, Spartan Hoplites, Greek Archer, Greek Peltast, and Mercenary Hoplites boxes.  I also picked up enough models for three Men of Bronze armies for less than 1 Warhammer 40K army.  I love historicals!

I am using 28mm single based models.  However, the rules themselves are scale and basing agnostic.  You only need to know who the leader base is and if a unit is in or out of Phalanx formation.  I decided that single based 28mm allowed me to do that easily.  However, it can be done with multi-based models pretty easily too.  These rules would also be great with strip based 15mm or 6mm models too.

Anyway, enough blabbing.  Now I have a question.  Does anyone recommend a good manufacturer of pre-made and pre-painted terrain?  I am interested in basic stuff like forest, vineyards, hills, and rivers/river fords.  Let me know in comments who you recommend.  Thanks in advance for the help!
Posted by Blood and Spectacles Publishing at 1:22 AM