Random: Green Army Men- Kill'em All and Destroy the Objective

My daughter and I had some time to kill after work and we decideded to play Green Army Men: Plastic Men, Steel Resolve.  The games is very simple to set-up and play and we managed to play 2 game sin about 20 minutes.  Then, it was time to go and our busy life was back in full swing!

I didn't keep careful notes of all the events, but I did keep track of some highlights.

Forces:
Choosing armies was really easy.  I asked if she wanted to be green, grey, or tan soldiers.  She opted for grey and I opted for green.  We then reached into the bucket and pulled out 5 guys a piece and looked at what they were armed with.

Overall, it was a good mix of weaponry types to try out.

Deployment:
We set-up in alternate corners of the table.  For terrain we placed a stapler, tape dispenser, a coffe mug, and a disposable coffee cup.  We were playing on a  standard sized table so probably 3 feet by 2.5 feet.

The Battles:
With that, we played a Kill'em All scenario first.  We just wanted to get familiar witht he game and the basic mechanics.  It took us very little time as the game is very intuitive.  One thing that happened a few times in this game is that the movement penny flick would hit a guy.  Per the rules, that would take out both players models!  It actually ended up as a draw because the two final guys ran into each other during movement! 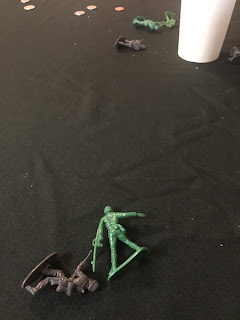 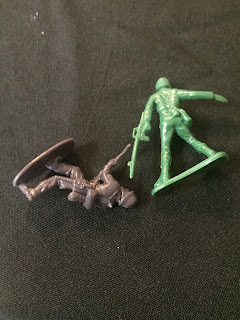 The second battle was a Destroy the Objectie mission.  We used a big cardboard coffee cup for the objective.  I was the attacker and managed to reduce the Objective down 5 hits.  However, I ultimately lost as all of my guys were killed.  The final guy was taken out by a direct hit froma  grenade the knocked him over.  Ouch! 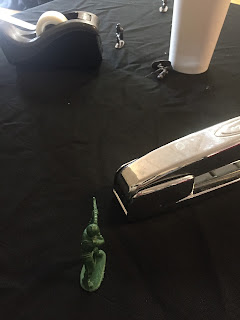 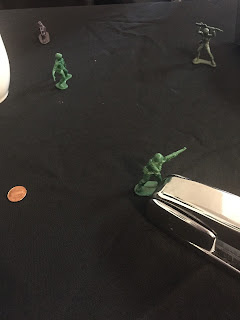 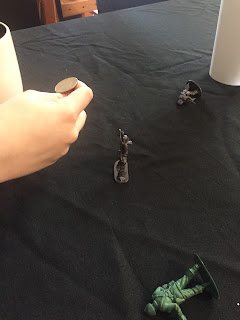 Here are a bunch of random pictures for that battle too.

Final Thoughts:
That was quick, brutal, and fun.  I look forward to playing it again, and I am sure it will be a hit with my family over Easter holiday.

You can pick up a copy for yourself at the Wargame Vault here!
Posted by Blood and Spectacles Publishing at 2:36 AM