It feels like it has been ages since I have written a review.  The last one was what…. Chosen Men?  Pikeman’sLament?  Pulp Alley?   I honestly can not recall.  Instead my attention has been focused on other goals.  You may recall that the summer is a pretty busy time for me professionally so getting the time to read and write this review was a treat. 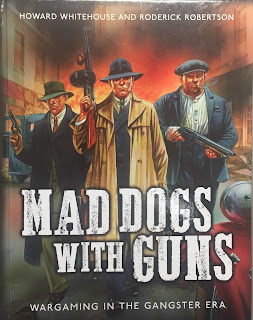 That brings us to today’s offering.  I am not 100% sure, but I think this game has been around longer than Osprey would have you believe.  I find reference to a purchasable PDF version in the past also called Mad Dogs With Guns about the same period and genre.  It may have even been released in a Soldiers and Strategy magazine.  However, I have not been diligent enough to confirm this.

Osprey seems to have used a similar pattern with HorizonWars.  First, it was a successful self-published set of PDFs before being picked up/licensed to Osprey to publish.  If this is true, it is a shrewd move by Osprey and could give those aspiring game designers out there a solid avenue to expand.  I hope that is there model.

Mad Dogs With Guns is a campaign skirmish game focused around gangsters in the 20’s.  This has been an interesting period to me for gaming even though I have few miniature or models for it.  It appeals due to a small number of models, campaign potential, and the “Rule of Cool”.  In addition, gangster activity was typically not in the city but in rural parts of the US so any terrain will do including desert canyons, forests, or even river mouths/beaches.  However, there is something appealing about the city boards used for gangster games.  When it comes to Gangster games you are looking for colorful characters, bullets everywhere, corruption, tommy guns, cars, and dolls.

Does Mad Dog With Guns deliver the goods?

Things I like
As always, I start with the things I liked in the game and build my review from there.  Mad Dogs With Guns follows a similar ethos as Frostgrave.  The actual mechanics are simple and easy to perform on the table, but the meat of the game is in the Campaign.  That is where Mad Dogs With Guns can stand above other wargames.  It is loaded with period flavor and concepts.  There are rules for Italian, Irish, Tongs, etc.  There are city officials to bribe, when cops will get involved, and even the Feds.  It even has a made-up campaign city in Illinois to use as your template that sounds suspiciously like Chicago.  The feel for these campaigns is about right.

When it comes to gang creation, it is surprisingly loose.  You can get your gang “off the Rack” with no upgrades/changes for a quick 1-off, randomly roll each gangster up for unique abilities and personalities, or get them “Off the Rack” and purchase upgrades or personality rolls.  All the methods are valid, but allow the players to decided how “custom” they want each gang to be.  For a 1-off throw down “Off the Rack” will work.  For a club campaign then Upgrades will allow quick and unique gangs, while for a full narrative experience you can roll up each model.

The Mechanics themselves are simple and straight forward.  There is minimal tracking and not much in the way of “If This/ThenThat” rules.  Each gangster has basic stats for the 4Ms.  You consistently try to roll below your stat for success, the higher the stat the better you are.  More powerful weapons roll more damage dice and reduce your gangsters hits, which degrades their ability to fight all the way from small injury to dead.  In practice hand-to-hand weapons are less lethal than shooting weapons.  This makes sense since Sean Connery always taught us to never bring a knife to a gunfight.

There are also rules for doing narrative actions like negotiate, taunt, give a deadly stare, etc.  This allows a light RPG experience that is important in these small scale skirmish games.  Fighting and shooting may not always be the best way to get the job done.

Things I Do Not Like
The game uses a card draw activation mechanic.  Each gang member gets a card in the pile, and when a gang’s card comes up they can either act or hold.  Hold allows you to interrupt later in the turn if you wish.  Some cards allow multiple gangsters to act.  The advantage of this is that it randomizes action so you never know exactly what you will get to do, and forces you to improvise according to the fog of war.  This is all good.  My quibble is more around adding extra “stuff” to play the game beyond the dice and outside of the game’s core mechanics.  Make no mistake, it is a minor quibble.  A simple alternate activation would have worked or alternate activation by type so all gangsters would go before thugs, etc.

Throwing dynamite and grenades uses a “flick” mechanic.  I have nothing against “flick” mechanics, I have used them myself in TotalCARnage.  However, this one goes against the flavor of the rest of the game and simply seems like a bolted on bit of silliness.  Instead, a simple dice mechanic would have been preferred.  The game includes one as an alternative and should have stuck with that one.  The “Flick” again adds more “stuff” to the game outside of what it needs.

Injury and Injury results can be a bit too table heavy for me.  About half of all “hits” will either be avoided or force a fallback instead of shooting.  That may make sense since gangsters are not that good of shots.  I mean even and artist with a Tommy Gun is still spraying shots everywhere.  I also do not mind a “defense” roll used to negate a hit.  After all, no one wants to stand there and simply remove figures.  However, I do not enjoy cross-referencing tables to find out if I hit the deck, stumbled back, lost a minor hit, etc.

This is also intended to be a club game.  It is not “tight”.  In fact, it is rather loose.  Gameplay and rules are basic and straightforward.  There are not a lot of in-game bonuses to be manipulated or stacked.  The tactics are simple and straight forward without a lot of depth or complexity to them.  There are not a ton of tough decisions to make based on the mechanics.  Instead, they rely on the scenarios.  The fun of the game is the story that it allows you to tell about the game, more than the game play itself.

However, if the fun of the game is the scenarios, these are also rather loose.  The basics for scenarios are there, but it is not tight regarding the mechanics of setting up the board, terrain placement, deployment, numbers, etc.  Each player is assumed to use common sense, which is harder than you would think.  The scenarios fit nicely into what we “know” about gangsters thanks to media, history, movies, etc; but do not always lead to well-balanced or tight scenarios.

Meh and Other Uncertainties
The game has cars and all the rules you need for cars.  They seem functional, but not that compelling to me.  There is the basic stuff you need like speeding up, slowing down, turning, etc.  They introduced a lot of tables.  However, automobiles felt more fiddly than fun.

Every gang has a Boss, Gun Moll, and Accountant.  I like the inclusion of the accountant in the rules.  It allows for some fun scenarios of the type we have all seen in the movies and on TV.

The game is in a nice hardcover book.  However, it still has a lot of whitespace, large font, and is spaced out.  I think Osprey may have stretched it a bit to get to a Hardback version, and could have slammed it into a Blue Wargames Series instead.  However, there are some great images of Copplestone Casting gangster models in action as well as a couple of nice art pieces too.

Final Thoughts
If you read Mr. Whitehouse’s Design Notes in the back of the rules I feel he mostly succeeded in what he was trying to accomplish.  That makes the game successful.  However, some of the mechanics just feel a bit dated now and the rules themselves simple resolve the 4Ms.  The rules are not what drive the game's fun.  The fun comes from the campaigns and stories that the campaigns lead to.

As a stand-alone 1-off game this would be a bit of a dud, but as part of a campaign with multiple gangs at club night it would be great!  Multiple games could be played in an evening leading up to a big gangland raid with all the players working together…. at least at first.  The game gives enough of the guidelines to create a fun campaign experience, and that is the type of gaming I like.
Posted by Blood and Spectacles Publishing at 1:41 AM