Polanski’s Lancers have been hired by Lacstar Industries to grab some rival Klan Enterprises executives from a corporate off-site on the Low-Grav world of Toth Secundus.  The executives are travelling under the protection of Thor’s Hammers.  Thor’s Hammers have been contracted to protect the Klan executives while having their off-site team building excursion.  Trust falls on low-grav worlds are so much safer.

Total Points= 24 Points
Mission
Missions are generated by rolling 3d6 three times and consulting a mission, complication, and Location chart.  Of course, you don’t have to roll any at all, but for a test game we might as well go for it!

Abduction Mission
The attacker sets-up the terrain per the guidelines.  The defender places one unit in the approximate center of the board.  Place a single “NPC” model with the unit.  The defender deploys the rest of their force on any one other board edge of their choice with one model touching the edge.  The Attackers can deploy on any other board edge touching the edge as well.

The attackers must secure the  NPC.  They can take the NPC by eliminating the Unit accompanying it with shooting or assault and then moving  the NPC into their Zone of Control.  The unit with the NPC may not leave the board and if they retreat/rout the NPC is left behind.  The NPC can be passed off between enemy units this way many times.  The game last 8 turns, one hour, or until one side is destroyed/routed.  If the attackers have the NPC they win.  If the Defenders have the NPC they win.

The Attackers are Polanski’s Lancers.

Rain
Tut tut, feels like rain!  The entire board is considered difficult terrain as a wall of blizzard like snow hangs across the battlefield.

The battle takes place outdoors, but is on a low-gravity world.  All units have their movement increased by 1d3 inches, and Double Times roll 2d3 and add the results together.  You can really move in this gravity!

Thor’s Hammers’ Dragon mech is accompanying the executives as close protection for their team building exercise.  It is during their trust falls that the Dragon detects Polanski’s Lancers coming in from the west.  They are approaching in groups of two, using the hills as a screen for their approach.  The rest of Thor’s Hammers respond to the Dragon’s call for aid and arrive on their board edge.  The rain obscures visuals and targeting computers, but not the high powered early warning detection scanners equipped all of the machines of the future. 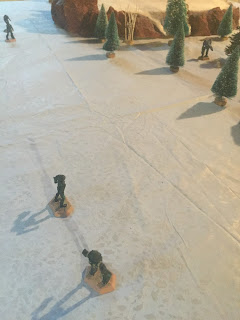 Turn 1:
The Lancers all Double Time forward, but the blizzard is hampering the speed of their approach.

The Dragon detects the approaching Lancers and shephards the executives away at full speed.  The Dervish moves forward to assist at double time, but the other two mech pilots nervously scan their sensors instead of moving up.

Turn 2:
The Lancers pursue at max speed, but the Trebuchet is momentarily blinded by a gust of snow and falls out of formation.

The Dragon continues moving out of the forest, but poor communication and blinding snowfall cause the others to miscommunicate.  The Hunchback rallies, but the others are shaken.

Turn 3:
The trebuchet rallies.  Meanwhile the Quickdraw forges ahead at double time.  The Assassin gets momentarily confused as they approach the woods edge.  The command Enforcer barely sees the Drgaon through the woods and snowfall, and opens fire with is gatling blaster.  The few shots that find the mark ping harmlessly off the Dragon’s heavy armor. 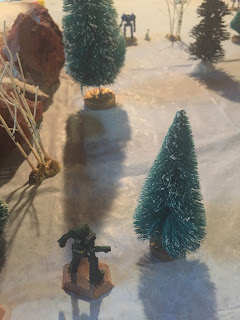 The Dragon ignores the fire and moves leads his wards closer to safety.  The Hunchback moves up to support the Dragon, while the Dervish stays shaken and the Whitworth rallies.

Turn 4:
The Lancers charge forward into the woods and close on the Dragon.

The Hunchback double times up to support the retreating Dragon.  He is in a good position to cover the retreat now.  The Whitworth is again shaken due to the inexperienced pilot, and the Dervish rallies.

Turn 5:
Both the Quickdraw and the Enforcer move and fire on the Dragon, but fail to penetrate its heavy armor due to the range and terrain.  The rest move up as fast as they can to support the attack, but so far things look grim for the Lancers. 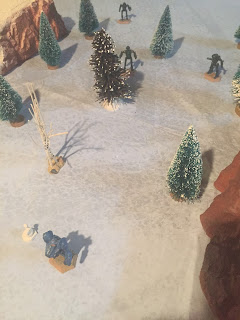 The hunchback drew a bead on the Enforcer, and opened fire with his heavy weapons on the much lighter mech.  The heavy weapon on the Hunchback does its worst and shreds 7 Effectiveness Points from the Enforcer despite terrain and range.  This causes the Enforcer to fall back out of the fight after a completely failed morale test. 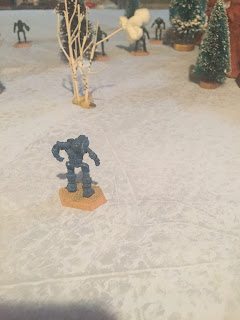 The Whitworth stays shaken, while the Dervish rallies.

Turn 6:
The Assassin races forward towards the enemy lines.  The Trebuchet opens fire with a barrage of long range rockets at the Hunchback, hoping to retaliate.  The blasts catch the Hunchback, but barely damage it.  The Quickdraw also riddles the Dragon with armor piercing shells, and a few manage to penetrate the Mechs armor and reduce it 1 damage point. 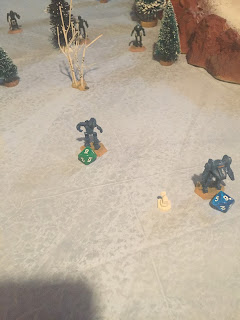 This time, the Hunchback targets the Assassin, and again a light mech takes horrendous damage to the Hunchback’s heavy weapons.  The Assassin loses 6 effectiveness and is force to retreat shaken! 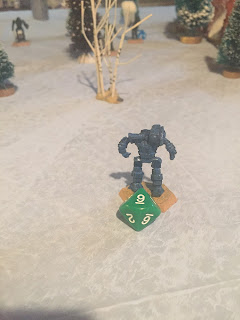 The Dragon keeps moving to safety but has to bypass the confused Whitworth.

Turn 7:
The destruction caused by the Hunchback causes the pilots of the Trebuchet and Quickdraw to hesitate, and they are shaken.  The Assassin rallies.

The Whitworth final decides to double time towards the fight.  Meanwhile, the Hunchback targets the Quickdraw at long range and opens fire.  This time, the Mechs firepower is much less effective against a heavier target.  The shells ping harmlessly away or outright miss.

The Dragon’s detail cause a moment of hesitation as he regroups his executive wards.

Turn 8: Final Turn
The Trebuchet and Quickdraw rally.  The assassin darts forward and fires some parting shots at the Hunchback, who easily absorbs them all.

The Hunchback is shaken from the incoming fire and fails to return fire.  The Dervish and Dragon both rally.  The Whitworth opens fire on the battered Assassin, trying to claim a kill.  The shooting manages to peel off one armor from the light mech, and forces it to retreat again. 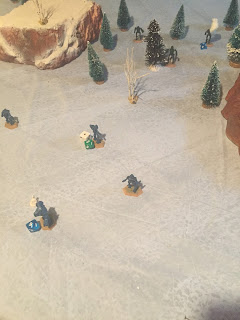 Conclusion:
The defenders, Thor’s Hammers win the battle.  Polanski’s Lancers failed to even shake the executives loose from the Dragon.

Using the heavily armored Dragon Commander as the escorting unit was a good idea.  He rarely was going to fail Command Checks to escape and methodically moved away from the attackers.  Plus, his heavy armor shrugged off my pursuing shots.  Once the Hunchback got in position between the Lancers and the Dragon it was all but over.

The heavy weapon upgrade on the Hunchback made short work of the armor 1 targets in this game.  The lower skill of the Dervish and Whitworth pilots made them non-factors, and I forgot to use the Enhanced Senses on the Assassin to move him faster.  However, that would probably of just gotten him shredded faster.

The combination of Rain as a Complication and Abduction made for a tough combination.  Thank goodness we had a Low Gravity world and no one would have been moving anywhere!

I think I want to try this Battletech version of Rampant Stars out again with a different set of complications, terrain and mission.

Posted by Blood and Spectacles Publishing at 1:00 AM