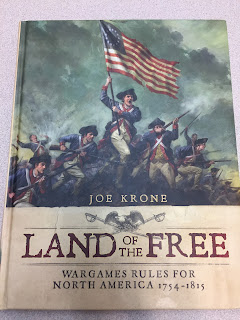 As long time readers of the blog know, I have been interested in someday doing a series of games for the War of 1812 focused in Wisconsin or other parts of the frontier for the period.  The Battle of Prairie Du Chien has been of particular interest to me as well as various “fictional” encounters in the wilderness.  To this end I have purchased a few rulesets such as Rebels andPatriots, Chosen Men, and The Men Who Would Be Kings; all from the Osprey Wargaming Series.


To help facilitate this project and my desire to buy, own, and read far more rulesets than I can actually play with; I decided to pick up Land of the Free by Joe Krone.  This one is a hard back from Osprey Games and was one of their early hardback games.

This one took me a long time to get through and I read it in starts and stops.  Therefore, I apologize ahead of time if my review gets a bit disjointed.  Despite the starts and stops in the rules reading, I think I have a good grasp on the games basic concepts.

Things I Liked
Over half of this book is scenarios to play in various wars from the period.  These cover scenarios in the Revolutionary War, the War of 1812, the French-Indian War, and more.  For a player new to the period, it provide plenty of historical scenarios of various sizes and scopes.  Mr. Krone took this part very seriously as he includes board lay-outs, army lists, synopsis of the battle, and all the great details you need to re-fight the game itself.  With many games focusing more on competitive, organized play it was nice to see something with a strong scenario bend to it.  The books is worth it just for the scenarios alone.

On a related note, there are also nicely done army lists and orders of battle to help newbies like me get a handle on the period.  This will not be needed for veterans of the period, but helped me out as a newbie to it.

The game was also base and scale agnostic.  You could just as easily play a game with a handful of 25-60 28mm figures, as you could with bases of 6mm, 10mm, or 15mm figures.  Indeed, the game uses generic unit “sizes” to help a player understand the capabilities of a unit.  These range from Tiny to Large units which allows for a wide variety of unit and troop types to be represented.  In addition, this game does not use figure removal and instead has hits that degrade a units ability to pass morale tests.

Scout elements allow your officers to access more Command Points.  Frequently, these types of units are ignored or have little additional value to a game.  However, additional Command Points allow you to give more orders to the rest of your troops.  This allows you to essentially, act on your improved intelligence gathering capabilities.

Each unit has a number of action dice.  The more dice, the more success they can get.  Frequently, the number of Action Dice a unit has is related to their size or skill.  The more dice you roll, the more potential hits you can generate in melee or shooting.  You are trying to hit a target number defined by the type of unit you are using such as Grenadiers, Line infantry, skirmishers, etc.  This is a simple and elegant way to resolve key actions, and allow some differentiation between units. 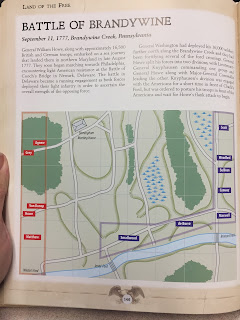 Things I Do Not Like
Like all linear warfare games, there is a bit of “IfThis/Then That” to the rules as how artillery interacts with infantry interacts with cavalry leads to some strange situations.  For the most part, modifiers are sufficient to handle these situations.  In addition, Interpenetration rules exist because it was a thing on the actual linear battlefield.  However, most of these are more down to the period rather than the rules themselves.

Units that are routed stay on the board and withdraw until they leave the board.  Therefore, a player must spend time dealing with a unit that is no longer viable instead of just removing it from the field as an abstraction for routing.  I am not a fan of this approach.

This game essentially uses the I-GO-U-GO method.  This is notinherently bad, but I do not think it helps the immersion for the players.  I can forsee long periods where the inactive player basically watches the active player move troops and roll dice.  The game would benefit from some sort of method to exchange the initiative. 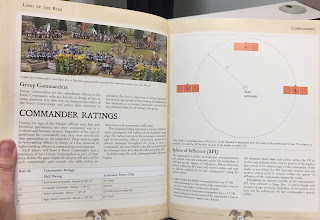 Meh and Other Uncertainties
The game uses individual based officers which then generate a command radius.  This is a pretty common and straight forward approach to the period.  However, I am not convinced this is the best way to model some of the limitations of command, control, and the leadership challenge on the table.

In addition, each officer has Command Points that they expend to have units act.  Once gone, they can not give more orders.  This acts as a resource limitation.  Therefore, an officer has two limitations on getting troops to act, the first is distance and the second is the number of Command Points.  I like the resource management this implies BUT I like the idea that a unit can always defend itself with fire or melee based on the local officers acting in their unit’s own best interests similar to The Men Who Would Be Kings.  In practice, this means units always being able to perform some actions based on training.   However, my impression is that such freedom of action was/could often be curtailed by discipline in Linear Warfare.  I am waffling here but only to sketch out some of the challenges a game designer must face and then make decisions about. 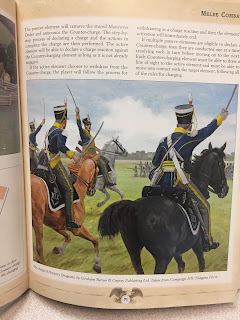 Unlike other Osprey Games hardback books, this one does not have a lot of white space.  In fact, every page is full of text.  For an old guy like me, some of the text was even a bit too small!  However, it still had great images of armies, color plates, and solid maps.  I imagine it was not cheap for Osprey to put it together and it looks great!

Conclusion
This is a very tidy and serviceable set of rules.  It’s main strength is that allows new players easy access to the period.  It has a great selection of Historical re-fights and scenarios of various scales.  It also provides a good basis for army lists.  Finally, the game scales really well from small skirmishes with a handful of figures up to large battles.  Gamers can therefore scale their games along with their armies.  This will be important for a player like me.  In my mind, it is the games strongest selling point.

On the other hand, the rules are rather “by the numbers”.  There is not a strong hook that really differentiates these rules from a game like Honours of War or Blackpowder.  The mechanics align pretty closely to these systems, and other Linear warfare systems I have read elsewhere.  It is unclear to me why I would use these rules over the more ubiquitous Blackpowder system?  In a sense, the game plays it a bit too safe and conservatively with its mechanics.  If you are going to tackle Linear warfare you really needs some strong hook to make your rules stand out in a crowded field.  Spit-balling, I feel it could benefit from some sort of Fog-of-War deck, a different activation mechanic, or something a bit different with the Command and Control features of the game.  I am afraid Land of the Free just does not have the hook it needs to make this a must play game.