The turn sequence and activation process known as IGOUGO is maligned across the internet as an antiquated and poor mechanic.  For the uninitiated an IGOUGO system is a turn sequence where one side actives, moves, fights, shoots, and does morale for all of their units at once.  Then, play turns over to the other player to do the same.  I am here to argue in defense of the IGOUGO system, despite what all the cool kids are saying.

Now, IGOUGO has many flaws:

1.       The “First Turn Advantage”- The player who goes first can set-up an overwhelming Alpha Strike OR gets the ability to eliminate enemy units before the opponent can react/counter-it.

2.       Stand around and get killed syndrome- One player essentially stands around while his troops get mangled with nothing much to do but roll saves.

3.       Wait Times- One player essentially stands around and watches the other player play the game until there turn comes around. 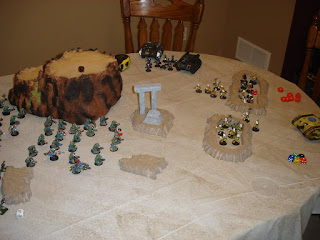 I am sure there are other flaws, but these are the ones I read/hear the most.  They are valid complaints especially while playing some very popular game systems.  Now, on the flip side the IGOUGO turn system has some key advantages as well:

1.       Easy to Understand- The turn sequence is intuitive and easy to understand.  No complicated rules, no turn charts, or additional mechanics are needed.

2.       Forces can work synergistically- The player can play a turn so units can mutually support each other on the battlefield in a simple manner.

3.       Allows for easy application of tactics- The player can easily apply tactical principles in a linear manner all in the same turn.  For example, applying overlapping firepower, support movement, chaining your attacks, etc.

Like all things in Game Design the IGOUGO activation method is simply a tool that the designer can use to create the game play they want to build.  In addition, some games will not have or be impacted by the inherent limitations of IGOUGO.  It is up to the designer to choose the correct tool for the job and in some situations IGOUGO would be appropriate to use over other types of activation methods.
Let’s do a thought experiment and think about what type of wargame would need such a mechanic or would work well with IGOUGO as its activation method.

So, how would this work in practice.  If we continue our thought experiment, let’s pretend we are creating an over-the-top wrestling game in the style of the World Wrestling Federation.  This game could work well with IGUGO because:

Here the game we are postulating will work well with an IGOUGO mechanic.


There is no such thing as in inherently bad mechanics there are only poor mechanics in relation to what the game is trying to do.  As designers we all have our preferences.  It is our job to choose the best tool to do the job, and sometimes that tool is IGOUGO.  Sometimes the best tool is not IGOUGO.  If you use the right tool for the job you will get better results.  Therefore, IGOUGO does not inherently suck as there are some cases where it is the right tool.
Posted by Blood and Spectacles Publishing at 1:51 AM