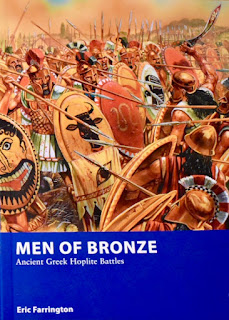 Men of Bronze focuses on Greek Warfare in the ancient world, and ends with Philip II of Macedon's victory at the battle of Charonae. In some reviews, I was properly criticized for not looking beyond the traditional, classical battlefields into the edges of the Greek world. Nicat the Irregular Warfare blog was right to point out this mistake, as I missed such important areas as Sicily, Thessaly, and Macedonia. I cover Macedonia in the book, but only after Philip's reforms. Therefore, I am trying to fill in the gaps here on my blog. I started with Thessaly and am now moving on to Macedonia.

Prior to Philip, Macedonia was considered a backwater place at the edge of the Greek world. However, they did participate in the Olympic Games and the ancestry of their kingdom was traced back to Thebes, and therefore Heracles and even Zeus himself. They were considered semi-barbarous. During the Greco-Persian wars, the Macedonians had sided with the Persians. They even had foot soldiers in the Persian army at the battle of Platea. Therefore, the rest of the Greek world did not take them seriously and consequently little is written about them by the typical sources. However, with the arrival of Philip II and then Alexander on the scene, the Macedonians exploded onto the world stage!

A Brief History
Not much is documented about the military history of Macedonia for this time period. Our sources are rather limited and I don't believe any of them are contemporary. The interest in this period was more of an after effect of Alexander's success. Therefore, putting together the details of this army can be sketchy at best.

Central Macedonian was good land for raising livestock, much like its neighbor Thessaly. This region was dominated by a landed aristocracy. However, there was also a mountainous highlands region farmed by peasants. Their traditional enemies were the nearby Thracians, Illyrians, and Paeonians.

They had a checkered history with their neighboring Greeks. During the Greco-Persian Wars the Macedonians were allied to the Persians. Later, during the Peloponnesian Wars they changed sides between the Spartans and the Athenians regularly. Parts of Macedon itself were traded between the two powers. Afterwards, the Macedonians were focused on internal politics and local matters between them, the Thracians, Illyrians, and the neighboring Thessaly.

The Macedonian military at the time was very different. It was composed of a couple of primary elements. The first component was the hetairoi, or the famous Companion Cavalry. They were composed of heavy cavalry with muscled cuirass. The horseman were composed of the nobles of the land.

Next, were the Pezhetairoi of the Foot Companions. These were the backbone of the infantry for the Macedonian army. However, they were relatively few in number compared to the majority of the infantry. There is some debate about how these early foot companions were armed. It is unclear if they were early pikeman, traditional hoplites, or something more like Iphikrates' hoplites. There is some reason for me to favor the Iphikrate's style as during the Peloponnesian Wars the Macedonians were exposed to this style of fighting. 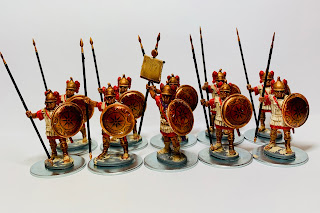 The Pre-reform Macedonian Army
The primary fighting arm of the early Macedonian army circulated around the mobility of their cavalry forces. The Macedonian nobility used heavy armored cuirass to protect themselves in battle, and some sort of thrusting spear. However, at this point in time, the Heavy Cavalry did not make use of the famous wedge formation. This seems to have been one of Philip's innovations. However, even now they were the primary arm of decision in the battle. The rest of the army were there to support the cavalry.

The Foot Companions were the primary fighting arm of the infantry. They would provide a steady center for the rest of the force. The Cavalry could sally out from around these troops. Then, after a successful or failed charge they could return behind this bulwark and re-group for a second charge. In addition, they could be counted on to hold on in a fight against Illyrian or Thracian light troops.

The militia would bulk out the armies numbers. They could hold a position if needed or force an enemy army to spread out across a wider front. This would provide weak points for a cavalry charge to exploit. 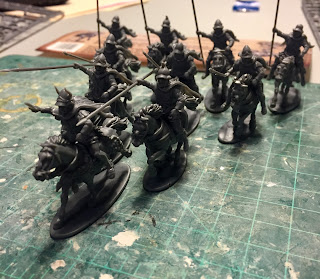 Each Line of Battle will have an entry with a number. The number indicates the limit of that Unit you can take in the army. If an entry says 1+ your army must have at least one of these units in it. If it is 0+ any number of that unit may be taken. If a Unit is not on the list, it can not be chosen

Sample Armies
Below you can see Sample Armies built from the Lines of Battle provided. They give you an idea of what your force could look like. They are all built to a 38 point force. They range from 5 to 10 Units each.

Battle of Therma
Just prior to the outbreak of the Peloponnesian War, Macedonia was fragmented between two rival kings, Philip and Perdiccas. The pretender Philip was allied with the Athenians. In response, Perdiccas stirred up revolt and rebellion in the Athenian tribute city of Potidaea.

This displeased the Athenians and they sent Hoplites and ships to attack. They took over the city of Therma. Then, they marched on Pydna to try and besiege it. However, they decided to leave the area on the news that Corinth was moving on Potidaea. The Athenians promptly made peace with Perdiccas and decided to align with him going forward. This allowed Perdicccas to regain control of Macedonia.

We know nothing about how the Athenians took control of Therma. All we know is that a force of 1,000 Hoplites were sent via 20 ships to attack the city. We know nothing about the Macedonian defenders or if a battle even occurred. Therefore, the scenario listed below will need to take considerable liberties and assume that a defense was even raised at all.

Forces
We know very little about the forces involved at Therma so this list will be taking some liberties.

This scenario uses the a scenario from the Men of Bronze rulebook as the basis for the battle. Since we know the battle around Therma was probably a siege, it makes sense to use the Ravage the Countryside scenario with the Athenians as the attackers and the Macedonians as the defenders. 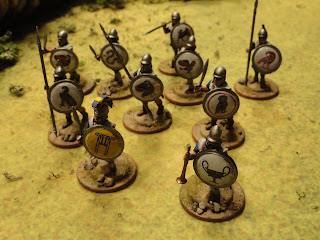 Set-up
This scenario is played on a 48 by 48 Base width board. Follow the deployment rules found in the Men of Bronze rulebook for the scenario. However, since Therma is a Macedonian city to start with, we will let the Macedonian player deploy all the terrain. However, instead of the normal 4 pieces of terrain with one in each 12 base width by 12 basewidth grid; only deploy one piece in each grid space on the Athenian side of the board. Place the terrain to be ravaged as normal.

Special Rules
You can choose to play this scenario with no complications, roll for them as normal, or choose them as you and your opponent wish. This scenario does not use any special complications.

Victory
Use the normal victory conditions for Ravage the Countryside found in the Men of Bronze rule book.

Conclusion
Now we can add another Northern territory of Greece into your Greek combat with Men of Bronze. This list along with the list for Thessaly on the blog will help round out your period options. I also have a blog post coming up soon about Sicily, Syracuse,a nd Carthage; so keep your eyes open. This period had a few more secondary sources thanks to the Macedonian campaigns with/against the Persians, during the Peloponnesian War, and in campaigns against the Thracians. However, these sources were not all aligned about the pre-reform structure of the Macedonian military and the Foot Companions especially required some judgment on my part to fit the troops types available.

A shout out to Nic at the Irregular Warfare Blog and Ingtaer on Dakka Dakka for their help and information. Thank you for all the support and help.

You can get all of the updated materials including a FAQ, Campaign rules, and Lines-of-Battle in the Men of Bronze Supplement: Hercules Abroad.
I look forward to seeing your games with these lists. Feel free to share them with me in the comments, on the message board, or send me an Email through my website.

Posted by Blood and Spectacles Publishing at 3:52 AM