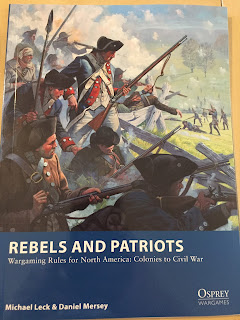 Rebels and Patriots is number 23 in the Osprey Wargaming Series. The focus of this game is battles in North America from the Colonial Period up to the Civil War. Basically, it is Black Powder or Horse and Musket for the New World. Since I live in the New World I was interested.

I had intended to use Chosen Men to play games set in Wisconsin during the War of 1812. However, I have never really gotten that project off the ground. I had gotten distracted by Greek Hoplites and Men of Bronze instead. Now I have even more reason to getting going on the 1812 in Wisconsin project with more rules to try out! I have also always wanted to do a Dakota War project and these rules may help out there as well.

The first thing you will notice, is that these rules are by Michael Leck and Daniel Mersey. Of course, those familiar with the Osprey Wargaming Series will recognize that Mr. Mersey has written, co-written and inspired many rules sets in the Osprey Wargaming Series line. I tend to think of these rule sets as the “Rampant” Series* of rules as they frequently have certain similarities in the core rules. I think it could be said that Mr. Mersey is the “Godfather of the Osprey Wargame Series”. He wasn't the first author in the series, but he maybe the most influential to other authors in the series. I know I found a lot of inspiration in Mr. Mersey's work.

This is also not the first collaboration of Mr. Mersey and Mr. Leck. Daniel Leck was the co-author of Pikeman's Lament as well. He also is a popular wargames blogger. I have a feeling this is not the last collaboration between these two, and look forward to see what they come up with next. They claim this is the “final” expansion, but I doubt it. The system still can easily be applied to other eras and wargame styles such as Sci-fi, Bronze Age, Mythical Age, etc. They probably just have not come up with the next concept yet!

As always, the game begins with Designer's Notes in the introduction. I love this aspect of the rules as it allows a glimpse into the process. In addition, it gives me clear criteria for determining if a writer was successful in their goals. In Rebels and Patriots, the goals were comparable to others in the Rampant series of games:


Well Let's see how they did! It might help if you have read some of my previous reviews of the Rampant series to get a better feel for my thoughts on this game.


*= In my mind, the Rampant Series includes:

Even though he wrote Dux Bellorum, I think the mechanics diverge enough to not be part of the “Rampant” Series. 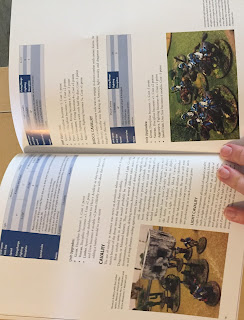 Things I Liked
As with other rulesets in the Rampant series, the Company creation process is easy, intuitive, and quick. Unit types are grouped into broad categories. Most infantry is Line infantry that you can apply simple traits to to match historical or unique units. However, you can have Light, Skirmishers, Natives, Shock infantry. Cavalry has Light or Shock. Then there are basic artillery units from light, medium, to heavy.

Once a unit is activated, you can only choose one action from a list of actions. This is a great way to force Tactical Play on a player. A player must choose what is important and the troops can not do everything you want, equally well. You have to make a choice about what matters.

I was happy to see that this game also uses a Group Leader for movement, facing, etc and other measurements where models are then placed within 4 inches of the Group Leader. The idea is similar to Chosen Men and Menof Bronze. However, unlike those other rulesets, who the player uses as their Group Leader can change from turn to turn.

The actions are easy to follow and generally follow the same basic rules. They are consistent and easy to follow. These will make for a good, simple to resolve game. There is not too much If This/Than That style rules. In addition, the terrain effects are relatively uniform and common sense. These rules do a good job of streamlining play like many in the “Rampant” family of games. 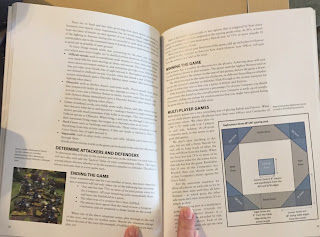 Things I Did Not Like
The rules as written use model removal for casualties, which I am not a fan of anymore. After spending lots of time painting the models, I want them on the board the whole game! However, it is easy enough to make a few changes to use counters or casualty tokens instead of model removal.

The game essentially uses I-GO-U-Go method. To act, each unit must pass an activation test. However, if failed, play does not immediately go to the opponent. You can continue to try to activate other units. This removes one of the biggest criticisms of Lion Rampant. However, I preferred The Men Who Would Be Kings method where there were certain actions a unit could ALWAYS take without testing to activate based on the unit type. I also kind of like failed activation causing play to turn over to the other player as a form of “friction” that a general had to try to overcome. In this current system, I am unsure if an activation test does anything more than just add a needless dice roll as a half-way point between previous activation methods.

The game also adds a very Black Powder like critical success/failure type mechanic on the activation tests. If you roll double 1s on activation, you roll on a chart and consult what terrible thing happens. If you roll double 6's, you do the same. I am not a huge fan of the “blunder” system in Black Powder as I do not think it really adds anything of value to the game play except another chart to roll-on and look up in the middle of the game. However, other players love this type of thing, so your mileage may vary.

I am not a huge fan of random charge distances for close combat/attack actions. This rule sets uses the activation roll as the distance moved in the charge. At larger scale games, I could see this working better to represent terrain that can not be seen/detected at the scale but at this smaller scale I am not sure I am a fan. The uncertainty of the activation roll is friction enough for me. I do like that there are some actions a charge unit can try to take depending on the unit type such as evade or counter-charge. 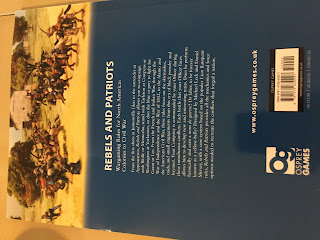 Meh and Other Uncertainties
The game continues to expand on the Officer ides introduced in The Men Who Would beKing and expanded on in Pikeman's Lament. This is an easy way to add some narrative and campaign elements to the game that has little impact on the actual game play itself. However, it can be distressingly easy for your one officer to start with a very bad trait. Thankfully, after various games he could get promoted or even killed so even a bad trait won't last forever.

Like other games in the Rampant series, the unit sizes are relatively static at 6 or 12 models. For example, light cavalry is 6 models, while infantry units are 12. Each company typically has 24 points to it, or about 4-6 units. That is about 72 models or so. Not bad. There are various traits you can give the units as well to match “historical” units. Some are downgrades and others are upgrades, but impact the abilities of your troops.

The game comes with 12 scenarios, which is more than the other game books if I recall correctly. One of the more innovative ones is the Great River Chase scenario. Essentially, your troops are attacking or defending three supply rafts coming down the river. Retreat tot eh Sunken Road is also interesting as the outnumbered Defender is trying to hold onto a road for 5 turns with no casualties in a row to win. Overall, there are some interesting scenarios that feel like they were culled from actual historical events.

Finally, the game has some example 24-point starter armies to choose from based on the North American war from the period. It covers the French-Indian Wars, American War of Independence, Northwest Indian War, War of 1812, Mexican War of Independence, Mexican American War, Mexican Adventure, the Civil War and many more. Overall, a pretty nice selection of armies for a diverse array of models.

Conclusion
Ultimately, if you enjoy the “Rampant” series of games, I see no reason why you will not like this latest edition. It has many of the strengths of the series and worked hard to minimize some of the criticism of the earlier works. I liked that failed activation turns over play, but many players do not like that model; and this version of the rules makes the necessary changes. Overall, I think the designers accomplished what they set out to do, and I would call this another success for the “Rampant” series of games.

Overall, I am now torn on what to play my War of 1812 in Wisconsin and Minnesota-Dakota War of 1862 with? Should I use these rules, Chosen Men, or The Men Who Would Be Kings? There is only 1 way to find out! I will need to play them all!

Posted by Blood and Spectacles Publishing at 2:15 AM