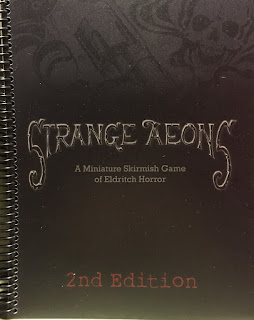 Sebastian Twist had been sent to Ammoriss several months ago by Inquisitor Xanatos to infiltrate the mutant and twist circles in the depths of the Adaconite mineworks. His reasons were unclear to his agents but they trusted his instructions. Father Robertus and Sergeant Major Bathory accompanied Sebastian to act as back-up and support.

After several months of laying low and monitoring the local situation, the two throne agents received word from Twist. A courier from one of the Noble Cartels was sending a payment to the local gangs they were using to round-up mutants to work in secret Adaconite Mines. Where the Adaconite that was mined was being sent was unclear. However, if the Throne Agents could secretly waylay the courier, it would disrupt the operations of the illicit Adaconite traders and possibly link them to a Noble Cartel.

The courier was being accompanied by a set of gangsters who brought a mutant enforcer with them to act as muscle. 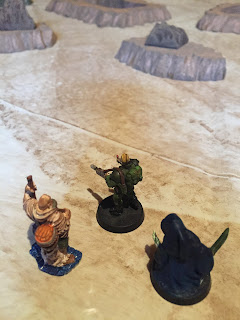 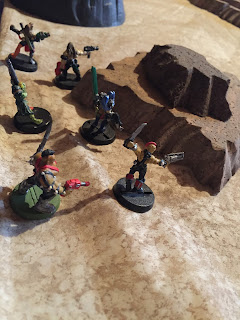 Mission:
Clearly, we are using the Strange Aeons rules but putting a 40K skin over them.

The agents quickly entered the mineworks to try and stop the courier from making it to their drop. One of the Smugglers (chosen by the smuggler player) must get the payment off the board edge. The Throne Agents must try to stop them.

Set-up:
The table is a 3x3. The ambush site is a warren of caves and mine shafts deep beneath North Ammoriss. Twisting corridors, jagged outcroppings, and poor lighting are the order of the day. This area has been abandoned as spent by the local Ad-Mech overseers. However, it makes a nice secluded place to make an exchange away from unwanted eyes.

The Smugglers are deployed on one side, with the Throne Agents on the opposite side.

Turn 1:
The Throne Agents carefully move forward into the dark mineshaft. Faint globeglobes are positioned strategically around the cavern, but they are on their lowest settings. They buzz ominously and fill the space with an acrid smell. In the distance, the shapes of the gang members can be seen moving around, the glowglobe illuminators cast strange, unsettling shadows making it tough to see exactly where the enemy is.

The baddies have an advantage as the Cult Leader has Command and can activate some of his minions we he activates. However, no one is in range yet.

Turn 2:
Father Robertus readies his hammer and creeps forward. He conceals himself behind a rock and vows that no one will get past his position, “By the Emperor.” Twist scuttles to a postion besides the main passage and hunkers down, waiting to get the drop on anyone who passes. Meanwhile, the Sgt. Major sees movement in the distance and his keen battlefield reflexes allow him to snap some las shots off. Their red beams momentarily flash across the cavern and alert everyone to the Agents presence. 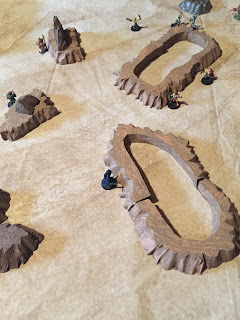 Turn 3:
With years of experience traversing and fighting in these tunnels, the gang leader shouts his comrades forward. He, a gangster, and the Mutant rush towards the rock pile Father Robertus is crouched behind. The priest sees the Mutant and is filled with a momentary anger. He leaps the edge of the rocks and charges into the creature with a bellow. However, when the horrible mutant visage becomes clear, the Father quakes away in terror.

Seeing the gangsters close in on his fellow agent, Sgt major Bathory steps up and fires as he moves. His shots fail to find their mark. A gangster steps out from the shadows and fires at the Imperial veteran but misses. The gunshot echoing loudly through the cavern.

Twist sees his chance and drops from his hiding place and rushes up to the gangster. The lady never saw Twist coming. The little Mutie drops the gangster with a well aimed shot to the groin with his large blade. The nearby gangster sees his friend go down and fires at Twist, but misses. 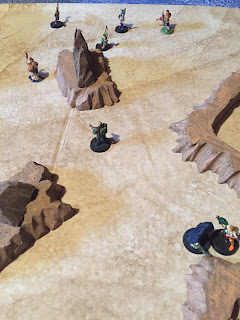 Turn 4:
One of the lead gangsters charges into the horrified Father Robertus. The priest barely gets his hammer up in time to block the strike. However,t eh priest is not out of danger yet as the Mutant rushes him too. This time, the Priest has steeled his nerves and faces the enforcer. Again,t eh priest fends off the assault. The gang leader runs past the fight and towards the gates beyond.

Twist sprints forward and jumps on the next gangster in his sights. His twirling blade is enough and he puts the gangster face up. He tries to change back to standing but Twist mercilessly hacks him down again.

Sgt. Major Bathory pivots and drops to a knee. He cracks off a pair of shots at the fleeing Gang leader, but only blasts a whole in her ragged, billowy clothing. The last gangster follows his boss towards the exit. 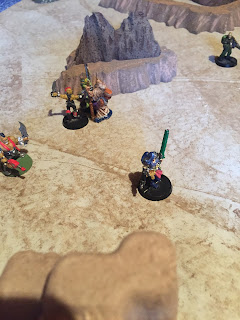 Turn 6:
It looks like the gang leader is fleeing for his life, and possibly his paycheck. The Imperial Guard veteran again fires on the fleeing gangster boss. With time to set-up his shot, he takes the target to Face Up and pins her.

The last gangster also runs to the elevator, and gets to the gateway. He frantically tries to open the old, rusted gate and it starts to give way with a long, screech.

Meanwhile, Father Robertus struggles and tussles with the two goons he is fighting. He holds them off with his combat training, but is unable to get the upper hand. Twist heads back towards the doorway.

The Gang Leader changes state and gets up from being pinned. 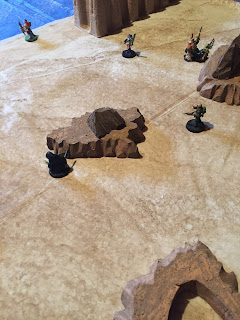 Turn 7:
Father Robertus manages to stunt eh gangster andknock the Mutant down with a powerful swing of his hammer.

Sgt Major Bathory changes his aim and targets the fleeing gangster. His shot slaps into the cage near the gangsters head, and serves to frighten the poor man even more. He squeezes into the lift and starts the machine moving, his boss chasing after him waving her arms wildly!

Conclusion:
The gang's bagman escaped back to the surface and his unknown paymasters. However, the Throne Agents managed to capture the others for interrogation and punishment. With any luck, the escapee will just assume they encountered a rival in the depths beneath the mineheads. Their investigation of the illicit Adaconite mining will have to continue with other leads.

Posted by Blood and Spectacles Publishing at 2:40 AM