MIG Alley was the nickname for the Northwest corner of Korea, where the Yalu River enters into the Yellow Sea.  This was the area where Communist MIG-15s tended to scrap with USAF Sabres for control of the skies.  Here, high above Korea was the site of many of the first Jet-vs-Jet battles in history.

On November 1st, 1950 the first MIG-15 jet fighters attacked a flight of USAF F-51 Mustang fighter-bombers.  Later that day, the first jet vs. jet combat took place between the MIg-15 and the F-80 Shooting Star.  The USAF's early jets were inadequate for the task, and soon the USAF was resupplying and using the new F-86 Sabre to counter the Communist threat.

The MIG-15's during the early phase of the war were secretly being operated by the Soviet Unions highly skilled 64th Fighter Aviation Corp.  While the Soviet pilots were engaging in the air, they were also starting to build up the North Korean and Chinese pilots to eventually rotate in and replace them.

After several play tests, and getting feedback from others I made a couple of BIG changes to these rules.  The first big change was to remove the "action economy" element of the game.  In the old version, all pilots took action in the Rookie Phase, Experienced Pilots and Aces in the Experienced Phase, and Aces only in the Ace phase.  This proved to be unpopular as an Ace pilot in a Prop plane could go faster than a rookie in a Mig.  Therefore, I removed this and instead gave the different levels of pilots the ability turn or change altitudes differently.  Rookies could only initiate a turn at the start of their move OR change altitude, experienced can at any point OR change altitude, while aces can change altitude and turn freely.

I also made a bit of a change with Wingmen and formations.  Therefore, you can better imitate the true Finger Four formation or pairs of aircraft working in tandem on the table.  A formation has the Wing Leader activate first, and it auto actives the wingman who must maneuver the exact same way as the Wing Leader.

Finally, I modified Detection so it was a bit harder to detect some planes right off the bat.  This allowed you to "sneak" them in and deploy them closer to the enemy.  I did this by changing it from a straight d6 to a d6+Turn mechanic.  I then increased the Detection number of all aircraft.  It is possible to detect a Jet fighter on turn 1, but it is unlikely.  Let's see what these changes did to the game.

I intend on giving both of these changes a try today.

This time, I am purposely re-creating a playtest battle I posted previously.  As such, it will mirror the set-up of that battle in order to test the key changes I made to the rules.  The UN is the attacker, and the sortie will be the Combat Air Patrol.

Again, we are mirroring the original combat.  The weather was determined to be clear.

Since this is a standard Combat Air Patrol in MIG Alley, no additional terrain is needed.  However, we add some hills on the edges of the board, ad determine them to be difficult terrain at Low Altitude.

Today's battle will be using my (in)famous Paper Templates.

This will be a straight up dogfight between the two sides of equal points and aircraft.

Turn 1:
Detection Phase:
A great Soviet roll, leaves all the Sabres detected, while the Migs are not detected.  The Soviet player rolled a 6 +1 for the turn to get a 7.  The detection rating on a Sabre is a 7, so the Sabres are detected.
I place the F-86's in a finger 4 formation, relative center of the table, and at high altitude to get us all started.  I decide that Sabre #1 and #2 are wingmen, and #3 and #4 are also wingmen.
No Migs in sight yet.
Action Phase:
The F-86s have no reason to split up, so continue going forward on their merry way.  They are blissfully unaware that Soviet Migs are about. 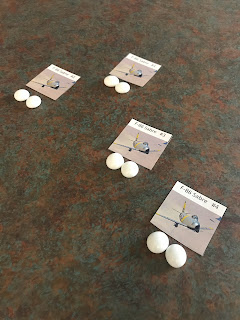 Turn 2:
Detection Phase:
This time, I roll a 5 + 2 for the Turn for a total of 7. This time, I get eyes on the Migs.  They can deploy up to 12 MU in on the board.  They deploy at low altitude, echelon right on their right edge of the board.  The Soviet player declares all her Migs are Wingmen to each other, so they will move as a unit. 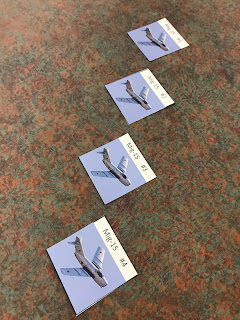 Action Phase:
The Sabres move forward and stay in formation, at high altitude.  The Migs also just stay going forward and in formation.
Turn 3:
We dispense with the Detection Phase since all planes are in sight.
Action:
The Migs ae coming in at an angle, so the question is whether to turn towards them to engage, or if I should do something different.  I am reluctant to go head-to-head with all that firepower, but to maneuver away may leave me sourly out of position, and still in a danger zone.  I decide I want to try to lure the big formation after i set of Sabres, while the other gets behind the Migs.
Sabres #3 and #4 break left with a 45 degree turn.  The Migs, do not deviate from the low altitude flight path.  Sabres #1 and #2 using wingmen rules break to the left at 45 degrees.
We will see if this works!
Turn 4:
Sabre #1 & #2 continue with slight 20 degree turns to get behind the Migs.  The Migs, keep going forward in formation and pivot 20 degrees as well, towards Sabre #3 and #4, but stay low.   The final Sabres do a 180 degree turn by inverting, and drop to Combat altitude.  They are trying to avoid the oncoming MIGS.
Turn 5:
Sabre #1 and #2 do 90 degree turns at high altitude to try and start getting behind the Migs.  The MIGs use their wingman formation and all go to Combat speed, and open fire on Sabre #3 and #4.
Only Mig #3 has a shot and he fires at Sabre #4 at long range.  He gets two hits, but thanks to range and deflection, the Sabre jinks away.  Mig #3 has fired off all his limited ammo.
The last Sabres hard break back towards their fellows and the Migs at Combat altitude. 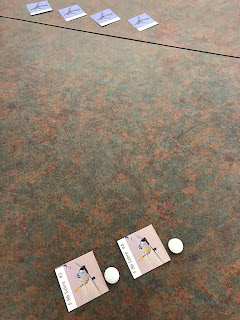 Turn 6:
Sabre #1 and #2 take 45 degree turns to get in behind the MIGs.  They still do not have the Angle as the MIG formation turns 45 degrees as well and towards Sabres #3 and #4.
Mig # 4 and Mig #2 light up Sabres #3 and #4 respectively.  The Sabres again manages to shake off the shooting with maneuvers.  MIG #4 runs out of ammo from his pass.
The Sabres turn in and good head-to-head against the MIG line.  There shooting fails to bring down any enemy planes either.  They also have more ammo left in their feeds. 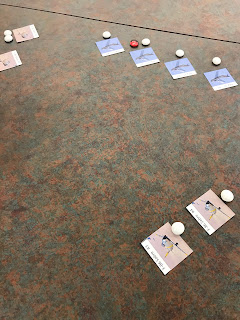 Turn 7:
The aircraft maneuver around, but are in a furball up close.
Sabres #1 and #2 are up high and failing to get the drop on the MIGs.  Meanwhile, the MIGs stay in formation and break hard left.  Sabres #3 and #4 cross their trail, but can't get the bead as they break 45 degrees to their right. 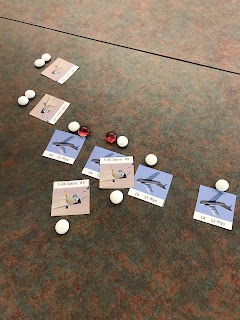 Turn 8:
Sabres #1 and #2 drop to combat altitude.
The Migs turn towards them, hoping to get a bead on them, but fail.
Sabres #3 and #4 bank hard and swoop in on the MIGs tails.  Only #3 has a shot and opens up.  MIG #2 manages to maneuver away from the shots!  However, Sabre #3 still has ammo left. 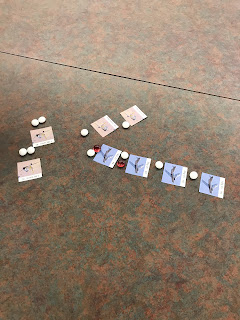 Turn 9:
Sabres #1 and #2 cut across the MIGS flight path as they roar past the opposite way.
Sabres #3 and #4 seem to have them in firing position and chase them down with a hard bank.
Sabre 33 opens up on MIG #4, but the pilot evades masterfully.  Sabre #4 also fires on Mig #3, and this time he manages to blow the wing off his foe.  Scratch 1 MIG! 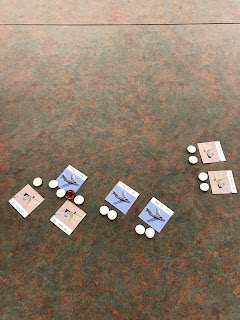 Turn 10- Disengagement Turn
Sabres #1 and #2 try to gain altitude and disengage.  However, the MIG flight inverts and climbs to take them on.  MIG #1 opens fire on Sabre #1, but misses.  He still has ammo.
Sabres #3 and #4 jet past underneath the MIG formation.
Conclusion:
All aircraft break for home, running low on fuel and ammo.  The USAF won by downing 1 MIG to 0.
So, the game felt very different with the changes I made.  Planes did less, zipping around then they did before, and the battle felt a lot less Vertical.  This felt like a more traditional WWII air battle game this time.  I am do not think it accomplished my design goals fully.
I think I am going to go back and take another shot at the action economy approach, but this time, all pilots activate in the turn, but only the turn names pilots can maneuver in their turn.  otherwise they just fly straight?  That is another big change to the rules.
The Detection rules worked better though, so those can stay!  I am also less sure about Wingmen movement, as they just ended up being big "groupings" of aircraft.  This is not necessarily bad though, and seemed to match my reading of the Korean War.  I will have to test those with the new "Action" economy again.
Back to draft again......