Between June 25th and July 20th of 1950 the North Korean air force engaged the United Nations forces in the Air Battle of South Korea.  The month-long air battle for supremacy saw several engagements over the airfields in Seoul and Taejon.

One of the first battles was around the Suwon Airfield on June 27th as North Korean aircraft tried to raid the United Nations air field there.  UN forces had begun evacuating civilians and diplomats.  However, they were engaged by North Korean aircraft.  The North Korean forces were mostly left-over World War II aircraft, versus F-82 Twin Mustangs and F-80 Shooting Star jets.

This was one of the first engagements of the war, and heralded in the jet age.

I intentionally chose an early war battle as I wanted to see the prop planes of the North Koreans and how they faired against the early USAF Jets in the game rules.  In addition, I wanted to see how Rookie pilots vs. Experienced Pilots played out.  This will be a big test for the game system.  Let's see how it goes!

We used the rules in the manual to determine the game set-up.

The weather is clear.  The mission takes place as the North Koreans attempt to attack the Suwon Airfield in South Korea, which is off board.  There is no real terrain except for aesthetics in this mission.

The UN aircraft have scrambled to intercept incoming ground-attack planes trying to thwart refugees and diplomats from escaping, and to damage the airfield at Suwon.

As usual, I will be using Paper Templates while I keep testing the game.  However, the templates are now in Techno-color!  Fancy!

Also, as normal, I will use dice to show the 3 elevations of the aircraft.  No dice is low altitude, 1 dice is combat altitude, and 2 dice is high altitude.  I will place the dice under the template to "raise it" up from the board as needed.

Despite the F-82's enhanced radar and detection phase re-roll the USAF only sees the 4 IL-10's flying in at combat altitude in a wide wedge formation drifting to the East side of the board.

The North Koreans have not detected any of the USAF aircraft at this point. 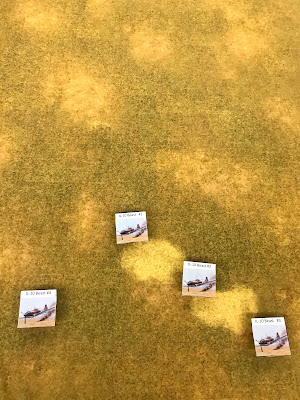 As The Il-10's are the only aircraft on the board, they proceed as planned towards their target.

No Experienced Pilots are detected or deployed yet.

This time, both sides get good rolls with the North Koreans getting a 5 and the USAF getting a 6 thanks to the F-82 re-roll.

The North Koreans had initiative and chose to go second.  The F-82's were placed in the center at Combat altitude moving to intercept the Il-10s, while the F-80's were at High altitude to the West angling towards the IL-10s.

The La-9's were at High altitude across from the F-80s, heading straight for the Jets.  The two Experienced pilots were lagging a bit behind, while the Rookies were deployed as far forward as possible. 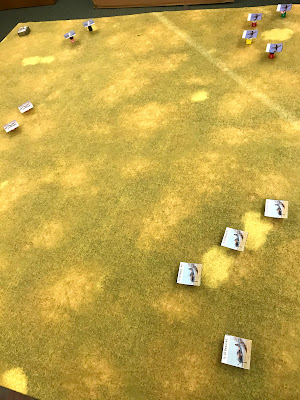 Everyone stays on target and moves forward. Distances are too great for shooting, but the gap is closing fast.  The fritzes make a 20 degree turn to try to intercept the P-80's moving on the Beast formation.

The USAF can still move, and two of the North Korean Fritzes.  The rest are only rookies.

The second F-82 makes a 20 degree turn to spread out the formation a bit to try to catch some more enemy aircraft on the approach, but everyone just hangs on and stays committed to their course and altitudes. 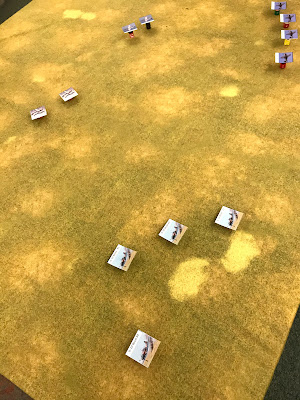 All aircraft have been detected now, so there is no need to detect anything.  I will be dropping this phase as we proceed in the game.

Beast #1 and #2 turn towards the approaching USAF Twin Mustangs, while #3 and #4keep pressing ahead.

Shooting Star #1 drops to combat altitude, but stays on course otherwise, while his wingman stays high.  The Fritzes press forward, with #1 dropping to Combat altitude.

Everyone is just out of combat range, but the Experienced Phase may get a bit nasty!

The USAF has more Experienced pilots, so gets to move the first plane.  F-82 #1 flies in and opens fire on Beast #1 at long range.  He rolls his 2 experienced dice and gets 1 hit, but the Beast gets an extra Maneuver dice to dodge due to long range.  The Beast pilots makes the Maneuver roll successfully and keeps on flying!

Fritz #1 tries to chase down the Shooting Star #1 at Combat altitude, but is just shy of having the range.  He may not be able to catch up to the USAF Jet now!

Fritz #2 drops altitude to Combat altitude and fires on P-80 #1.  First blood to the Communists as the Fritz takes out the P-80 at range.  However, he also runs out of ammo in the process! 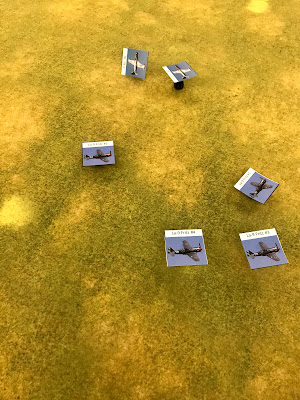 P-80 #2 tries to stay high and blast past the North Korean defenders. 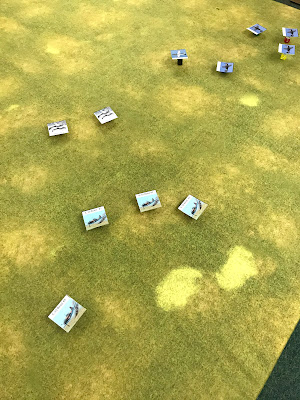 The F-82's try to split away from the oncoming North Korean planes.  It works for #1 avoiding Beast #1, but Beast #2 fires on the second Twin Mustang.  His shots do not find a home, and he still has ammo in his bays.

Fritz #2, out of ammo drops to low altitude.  Meanwhile Fritz #1 turns to chase the USAF planes, but is too slow.  The other Fritz stay at high altitude and head for the mission objective.

Beast #4 turns towards the F-82 #1 and opens fire.  A lucky shot downs the USAF plane!  Did not expect that! He even has ammo left! 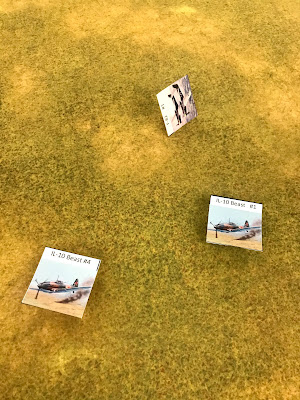 Things are not looking good for the USAF!

P-80 #2 swoops down and ices Beast #3 with a burst of machine guns.  However, it took all of his ammo to claim that kill!

The rest of the planes just maneuver for position for next turn.

The USAF has lost too many planes and is given the order to fall back.  This will be the last turn.

The Americans dive to the hard deck to avoid the oncoming North Korean Beasts.  The Fritz continue on their journey, unopposed.

No shooting as no one has the angle. 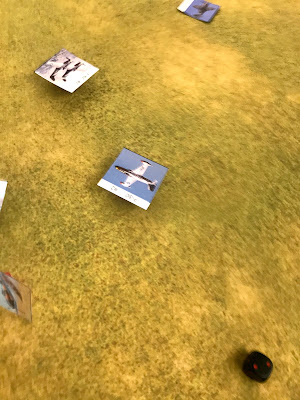 The Americans try to maneuver back around, but they will run out of time before they can do anything about the other North Korean planes.  Meanwhile, the North Koreans just continue to fly towards their board edge. 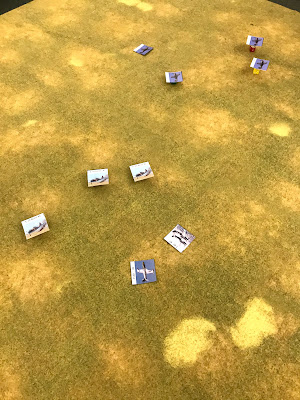 The North Korean forces win 2 Kills to 1.  The USAF was forced to disengage this time!

The North Koreans got some lucky hits, and the USAF had some unlucky Maneuver rolls.  As the Communists, I think the USAF set up their Jets poorly and forced them to fly across the front of my fighters to get to their targets.  However, once the Jet got past the front of my Fritz, there was no way I was going to be able to catch up or maneuver to face them again.  I was lucky that my Beast's were able to shoot up an F-82 head-to-head, otherwise it would have been tough to stop them from plinking me off with deflection shots and tailing.

The rookie pilots managed to hold their own, even though they were at a big disadvantage.  The Beast pilots in particular got lucky when they turned into the USAF attack and went head-to-head.  They were rolling 1 dice to hit, and managing it.  Meanwhile, the USAF with 3 Maneuver dice to dodge were not managing it!  Despite the Rookie pilots, we saw here that Quantity of shots had a Quality all its own.

I was pleased that the Shooting Star #2 was able to out distance and avoid the pursuing La-9's.  If that did not happen, I would of had serious questions about the game design as is.

So far, the game has been a pretty straight forward affair.  Most kills have happened in the opening head-to-head pass.  Then maneuvering after the first past takes time and energy to get back into position.  The battle is much more about initiative, height, and speed than it is about horizontal maneuver and positioning.  That reflects the period in question.

Testing continues for the various aircraft and sortie types.