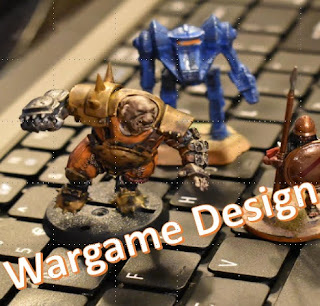 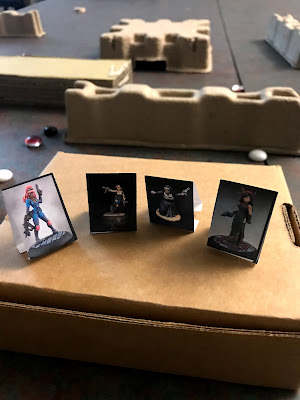 Mission:
For this test run, the team needs to "scout the area".  They do this by moving within 6 MU of a Shadowpoint Marker and make a successful Awareness test.  The more they investigate, the more they score victory points.  They do not need to "shut down" a Shadowpoint Marker to score.
Set-up:
The game is played on a 36MU by 36MU board with 1 MU = 1 inch.
The board has a variety of LOS blocking terrain in the form of walls and buildings.  There are 4 Shadowpoint markers starting on the board, and 4 potential Threat markers.  The Shadowpoints are placed randomly around the board with a Threat marker adjacent to them.  There are also four illumination points, with a 6 MU radius that are also randomly placed.
Shadowpoints= Black Tokens
Threats= Red Tokens
Lights= White Tokens
The "Knights" all deploy together in a corner of the board behind cover on the more well lit side of the board. 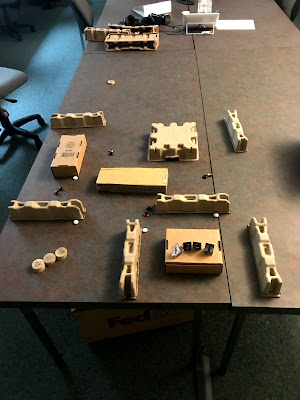 Turn 1:
This is a solo test game, so the "knights" get to go first.
The Knights choose Heidi to go first, as she is a Free Runner.  She has a d10 Awareness, so makes her check.  She rolls a 3, which is a failure!  Therefore, the Darkness gains 1 Fear marker and play turns over to the Darkness.  The Darkness fails to spawn a new Threat, but an existing at the nearest Shadowpoint moves 4 MU away.
This time, Lt. Wulf tries to activate and successfully does so with a 5.  This gives her an LOS of 7 MU.  6MU is base, and she scored 1 over 4+ to add 1 MU.  She moves up, but can not see the nearest Threat marker due to blocking terrain.  Afterwards, play goes to the Darkness again!
Sister Winifred gets an 11, so activates with a 13 MU LOS.  She goes around the other side of the buildings and draws LOS to a Threat Marker.  Thankfully, it was just an abandoned newspaper blowing in the wind, and making all sorts of noise!
The darkness spawns a new Threat marker at the far Shadowpoint.  Then, Xujiang moves up to stay with Lt. Wulf.
The Fear level is 2, and the Knights have not scouted any Shadowpoints.
Turn 2:
Heidi shakes herself out of her revelry and moves out.  She activates and passes a Dynamic movement test to get on top of the nearest building and nimbly move over its roof.
Sister Winifred acts next, and moves forward.  She peaks around a corner and sees another threat marker.  Thankfully, it is just a stray cat! 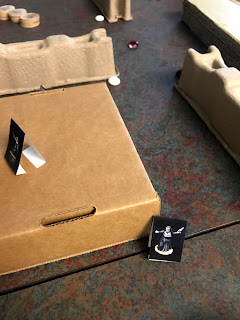 Lt. Wulf tries to activate next, but hesitates as Sister Winifred's voice buzzes in her ear bud, "Just a cat".  The Lt. breathes a sigh of relief, but the Fear level goes up 1 for failing an activation check.  The moment of concern causes Lui Xuijang to also freeze up!  Another Fear token means it is more likely for threat markers to spawn, and those threats to be enemies!
Fear Markers 4, 0 Shadowpoints scouted!
Turn 3:
Sister Winifred moves to go around a nearby wall, but can not get close enough to scout the second ShadowPoint yet.
Heidi moves to the edge of the roof and squints off into the distance.  She had seen movement, but it was just a long shadow after all!
Lt. Wulf moves to the first Shadowpoint, but can not inspect it yet.  To busy covering her movement from an attack.  However, her vigilance is warranted as a rifle toting zombie shuffles into view in the distance!  It fires at her, but misses! 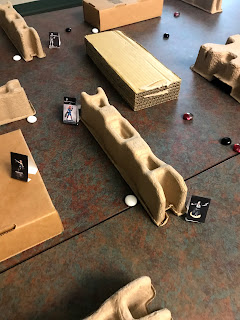 Hearing the gunshot crack through the night, Xuijang freezes up and takes cover.  1 more Fear Token!
A second gun toting zombie spawns and attacks LT. Wulf up close!  It came out of nowhere!  However, the LT. fends it off!
Fear Tokens 5
Shadowpoints Scouted: 0
Threats: 1
Enemies: 2
Turn 4:
Heidi opens fire with her sub-machine gun at the distant zombie, and forces it back 1 MU.  However, it is immune to suppression as it is undead and does not know fear!
The Shadowpoints spawn another threat!  Meanwhile, Lt. Wulf struggles with the Zombie that jumped her!  She is not much of a fighter, more of a shooter!  Thankfully, neither is the Zombie!  However, the Shadowpoint spawns another Threat! 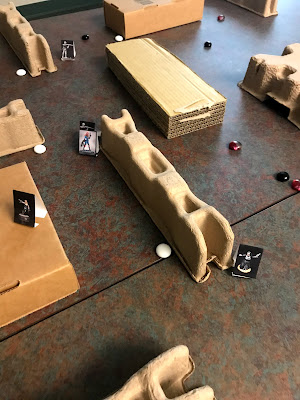 Seeing the Zombie fight with Lt. Wulf the Psychic again stays in cover.  Sweat and nerves keep her pinned in fear! More fear Tokens!
Hearing more potential threats in the darkness ahead causes Sister Winifred to also take cover and peer into the darkness!
The rifle zombie that was pushed back fires on Heidi, but fails to hit.
Fear Tokens: 10!
Shadowpoints Scouted: 0
Threats: 3
Enemies: 2
Turn 5:
Sister Winfred squints into the darkness and sees her caution was warranted.  Ahead in the darkness is a Zombie with an idling chainsaw!  The sister brandishes her Holy Symbol and calls down the power of Jesus to repel it.  The beast shambles back!  Away from the Sister's holy aura!
Lui Xuijang concentrates on the Zombie fighting Lt. Wulf, and causes him to freeze in place with the power of her Mind!  This allows the LT. to blast him with her pistol up close and kill it!
The other gun-toting zombie fires at Heidi and causes 1 MU of push back, which knocks her from the roof!  She takes an injury and reduces her fight to D4.  The fall also causes Heidi to fail her awareness check! 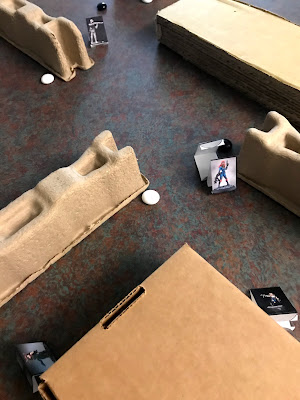 Fear Tokens: 11
Shadowpoints Scouted: 0
Threats: 1
Enemies: 2
Turn 6:
Lt. Wulf takes a moment to catch her breath after her close call with the zombie.  However, this means she can not scout the Shadowpoint.  This takes them to 12 fear, and triggers the Doomsday Turn next turn!
A new Threat spawns near the Shadowpoint by Sister Winifred, and this causes her to huddle into cover.  Her Holy Symbol gripped in her hand.
Heidi gets up, fires at the Zombie with the rifle, and fails to hit him.
The Threat marker near the Sister charges at Winifred.  It is revealed to be a powerful undead Devourer! The attack strikes her in the head, and she reels back.  Her Brains are reduced to d6. 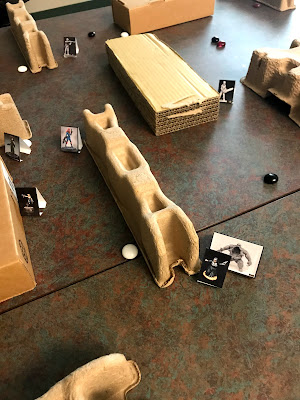 Lui Xujiang moves up and draws a Line-of-sight on the rifle toting Zombie.
Another Threat Marker appears, but goes behind a building by the second Shadowpoint.
Fear Tokens: 15!
ShadowPoints Scouted: 0
Threats: 3
Enemies:3
Turn 7- Doomsday Turn:
Finally, Lt. Wulf activates and scouts the nearest Shadowpoint!  The nearest Zombie rifleman tries to push her back with shooting, but fails.
Sister Winifred activates, and holds out her crucifix defiantly and screams in latin at the Devourer Zombie, who rushes off in terror of the mystical symbol!
Another Devourer Zombie appears at the Shadowpoint near Sister Winifred!
Heidi fires her SMG at the rifle toting Zombie, and hits him.  Causing him to go to d4!
Another threat marker appears at the furthest Shadowpoint.  The undead forces are starting to respond to the Knights in their region!
In the last activation, Lui Xujiang hunkers down in fear, her eyes darting around in terror! 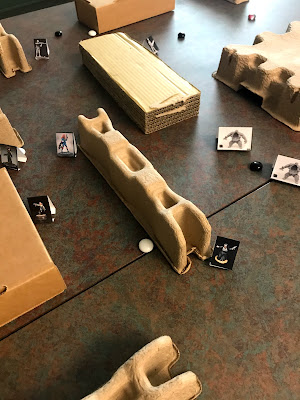 Conclusion:
Seeing that the undead hordes of the Darkness were starting to gather, Lt. Wulf called for the withdrawal.  She triple clicked her ear piece, that was the signal for the rest of the team.  They fell back to their exfil location and loaded up in the armored vehicle waiting for them.  They rumbled away into the night.
The radio crackled to life, the scratching, disembodied voice of their patrons filled the cabin, "Well?"
The team sheepishly looked around before Lt. Wulf cleared her throat, "We didn't manage to get very far before the Undead started to swarm our position.  We located and pinned the location of one potential Shadowpoint rift in the target area."
"That will do,  Send the co-ordinates so we can target it for destruction via other means.  Was anyone hurt?"
"Nothing serious, just some minor injuries.  However, we are all a bit shaken up.  I thought I was ready for the oppressiveness of the Darkness, but when you are on the ground.... in it......," her words trailed off.
"No need to be ashamed.  That creeping dread is spreading everywhere.  That is why we need to locate and destroy more of these Shadowpoint before it is too late."
The silence hung in the air uncomfortably for a moment.
"Good for now.  Return to base, and we will plan our next move."  The radio snapped off.
Well, that was fun.  How did it play?  Well, activation did not go nearly as well as I would have hoped!  Half of the Fear Tokens were generated as I blew activation rolls on d10's and d12's!  That sucked!  Poor Lui Xujiang spent more time scared of her own shadow than doing anything.  I think I will make the Awareness test to activate a choice.  You can activate with 6MU LOS for free, but making a check could allow a larger LOS, but the chance of failing and getting FEAR tokens and not activating.  Now, it is a decision point.
I normally only let a model get 1 action to create more tactical play, and that really hurt in this game.  I had to make tough choices, but I also didn't get to do much before I got swarmed by tougher and tougher enemies.  I honestly did not expect those d6 rifle toting Zombies to be so tough to get rid of!  As you acquire Fear Tokens, the enemies that are spawned are tougher and tougher to drive off, and get better at killing you!  The main threat in this game is not the enemy models or Threat tokens, it is running out of time and getting bogged down in Fear Tokens and the game ending.
The Illumination and LOS rules seemed to work fine.  The dice shifting and 4Ms worked fine as well.  I am unsure about the Frequency of the Fear Tokens, might need to dial them back a bit or not give them out so easily.  Also, currently it is easier to spawn the harder monsters and hard to spawn the easier monsters.  That escalates the tension, but seems "wrong" at the same time.  There should be more easier monsters and fewer harder ones.  I think I will tweak that spawning system a bit.
The models all having different strengths and abilities worked well.  I liked that, even if one of my best shooters got jumped into close combat right away!  The special Repulse and Freeze powers worked well when they were used.  I think I will need to get these out on the table again and see what happens next time before I make too many adjustments.