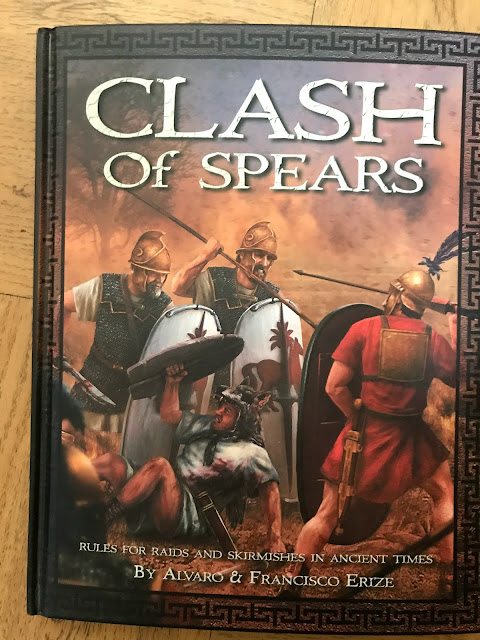 Clash of Spears is a Skirmish game for Ancients.  Many Ancients rule set focus on the "Big Battles" like Plateae, Cannae, Zama, etc.  However, these take a very different approach since instead they are looking at the smaller scale skirmishes between soldiers.  I can understand why the gaming world would focus on these larger scale battles as that is where most of the sources are, and where the scholarship is!  There is very little actual historical detail about skirmish combat, even though we can be confident that small scale engagements between individual and small units must have occurred.

This level of gaming has always appealed to me for a simple reason.  I can not typically see myself or imaging myself as one of the "Great Men of History" to use an out-of-favor term.  I can see myself as a poor, confused, scared, grunt on the front lines trying desperately not to get killed!  Therefore, smaller scale model-vs-model and small unit-vs-small unit type skirmishing appeals.

Thankfully, Clash of Spears begins with a high level overview of the designers intent.  The idea is to have short, violent bouts of violent action.  Then both sides need to withdraw and regain their strength and courage.  The game is also intended on how leaders of such smaller units must maintain focus on keeping their units battle ready, even when faced with fatigue.  This can be mental and physical fatigue.  Finally, the game is intended to keep both players engaged through out the battle.

That all sounds dandy to me, but can the rules actually pull off what it says on the tin?  Time to form ranks and march in to find out. 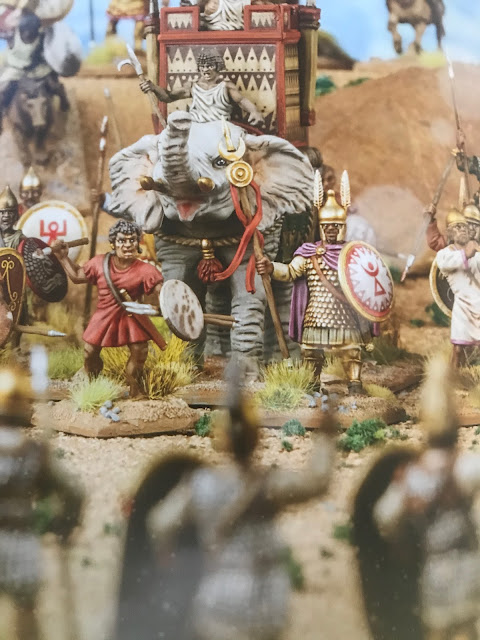 At the end of each section of rules, they had a nice little summary.  This made finding relevant rules very easy!  Boxed out examples were also helpful.

The biggest "innovation" in the rules is that units acquire "fatigue points" that hinder their ability to carry out actions.  These rules interact with actions, armor and terrain to indicate that units trying to push through difficult terrain while fighting will have a big disadvantage.  All fatigue applies AFTER the action is performed. These Fatigue Points impact your combat and morale tests.  Too much Fatigue and your units just run away.  You can remove Fatigue points by resting your troops.  This forces you to think through how and when you  need to time "the big push" for victory.  On the downside, a QRS and Tokens are needed to apply these appropriately in the heat of the game.

You can use Command Points to influence Initiative rolls!  This makes it a bit of a bidding system. After that, it is alternating activation with a reaction phase.  Perhaps the reactions are over-engineering in an alternate activation game, but it does require both players to stay focused on what is happening in the game.

The rules have a nice "Putting It All Together" Chapter that walks through a sample turn.  This was very helpful for me to understand the flow of the game and how all the components laid out in the rules went together.  This was very helpful and helped illustrate all the decision points in the game, and really highlights the importance of fatigue.  Decision points are good.

Deployment involves using counters so you can set-up using "blinds".  Counters can continue to move onto the table until they are "detected".  Then they halt movement.  No counter can be moved in more than 6 times, or up to 24 inches without being halted.  This allows for a more varied deployment methods and some uncertainty.  Once all are deployed, you can reveal the units and they acquire starting Fatigue based on their deployment, terrain, and type of troops.  If you want to just throw down and play, you may find this approach tedious.  I like it since you have to start making decisions early.

The book had great shots of models on the table, some of them full page shots!  They also have nice art.  They also had diagrams and images to help illustrate the rules of the game.  This is a plus in my book. 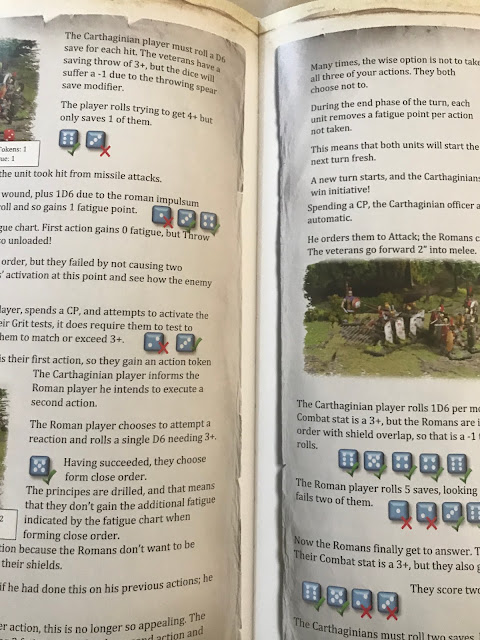 This rarely comes up for me, but I am not sold on the lay-out of the rules.  For example, it talks about fatigue tests and how it impacts the game, before I am even sure how the game turn is structured.  Therefore, I am left a bit confused on how the Turn Sequence and the Fatigue rules interact.  There were some other head scratchers of lay-out where I was unsure how it would play as key aspects of the interactions were not clear based on the structure of the rules themselves.  That is probably why the "Putting It All Together" section was needed.

For maximum effect, the game seems to use Character Models and the Command Points and Command Range they provide to give you maximum tactical flexibility.  The commanders themselves are not better fighters necessarily than the rest of the troops, but allow them to execute more actions.  This makes sense to me, but the downside is that "Character" models become essential to how much you can do tactically, therefore your officer must roam the battlefield and tell your guys what to do.  I am no longer of fan of this model, with a few exceptions based on genres.

I feel that individual units will have their own leaders  and the soldiers themselves probably know the business of soldiering.  They don't need Artorious The Named to tell them to move forward, throw their Javelins, and then fall back!  Sure, this is a skirmish, but it still feels a bit weak sauce for the level of game we are playing, but it is not the only "skirmish" style system to do something similar. Look at games like Land of the Free, Chosen Men, and Sharpe's Practice as examples.

The game is not as streamlined as I would like as armor, terrain, actions, combat results, etc all interact to generate Fatigue Points.  In addition, each unit will have a a Fatigue Token, Activation Tokens, and Casualty removal to determine their state.  This seems a bit heavy on the tracking for each unit.  In addition, there feels like a lot of dice rolling to generate somewhat ordinary results. 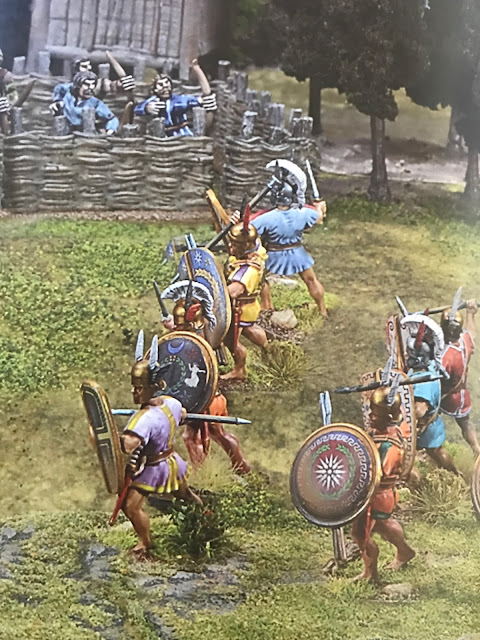 The game allows pre-measuring.  The idea here is that troops know their engagement ranges very well, and there are plenty of other places to make a tactical mistake.  Judging distance is not one of the mistakes to be made.

To activate a unit requires 1 CP from a Character, and 2 if the unit is out of range.  If the unit has Fatigue they will also need an additional Activation Test!  For those who complained about Lion Rampant, this is not the activation process for you!  You can see how this game is very tactical in its design where the position and state of troops really matters.  I will also emphasize that Command Point respawn is 1 less than the Character's Profile, so there is also an attrition/resource management component to the use of Command Points and a limit to the number of characters you will probably have access to in a battle.

Units once Activated, can try to chain their activations.  However, in between chained Activations the opponent can try to react and interrupt the chain.  Reactions always require an activation test and a Command Point usage.  Finally, due to the way Fatigue accumulates sometime sit is just better to wait and remove fatigue instead of pushing all out.

Units can activate up to three different times in a Phase. This includes reactions as well.  So theoretically, a turn could have a force with 5 units, take 15 activations.  This is unlikely to occur due to mounting fatigue.

The board set-up has a pretty comprehensive set of rules, but they seem a bit dice heavy to create a "randomization" effect.  The idea it to limit one person or player dominating the terrain placement too heavily to provide and advantage.  There also rules for gaining re-rolls before a battle by consulting the Omens or giving a rousing speech, these are flavorful additions.  There are five basic scenarios in the rules.

Finally, the last section has some rules for warbands for the game.  These mostly come from the Rise of Rome period, so it has Republican Romans, Gauls, Carthaginians, Greek Colonies, Numidians, Pyrrhus, Iberians, Samnites, and the Italic tribes to start you off with.  That should cover most people's ancient army lists for a good start.  The authors even acknowledge the limitations of any points system, but one is provided for players to argue over.  This should be enough to get you started with your Ancient Skirmishing. 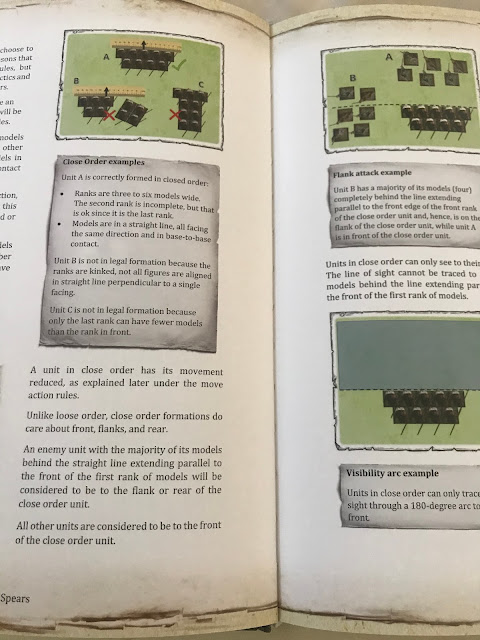 This game is heavy on the friction and decision making in how to resolve said friction, and I like it in theory.  Running out of Command Points is really bad! Having too much fatigue is even worse!  However, there is a bit more book keeping and charting to the process then I would like.  In practice, a unit would have up to 3 action tokens and up to 6 fatigue tokens, which is at least 2 markers per unit, with casualty removal a third way to show the state of the unit.  In addition, there are a number of actions a unit can take that apply different situations and modifiers for a unit. Perhaps a side board is needed to help track it all?

I am sure in practice, the modifiers and details will fall away pretty quick, but just at first blush a QRS will be needed to recall what Modifiers apply when, and how many dice you roll in certain situations.  Thankfully, the game does come with a QRS you can copy, and a card version too!

I can't shake the feeling that this started life as a Mod to Warhammer Ancient Battles, and tacked things on instead of peeling elements off.  The way base-to-base works, the casualty removal, the focus on individual armaments and gear, the dice approach, initiative in combat, it just feels like the level of "Crunch" vs. "Abstraction" that the old GW game had.  I had the same feeling about Osprey's Chosen Men, too.  I am probably wrong in this case because there is a lot of divergence from that model.  In fact, at one point the designers say, "We have tried to use simple, standard mechanics for combat and shooting to leverage the experience that many players have had with previous games".  This maybe the source of this thought, since the focus on Fatigue is VERY different than many other games systems.

Overall, I think the games emphasis on Friction and Fatigue is a great idea.  To me that is the heart of ancient battle.  The delivery I am not as sold on.  I feel more thinking on the process could have led to a more streamlined approach to achieve the same desired results.  There is some places where they choose to abstract such as measuring, formations, flanking, etc; and others where they choose to get detailed such as weapon initiative, defensive postures, how actions impact location and formation, etc.  I know these are skirmish rules, so a certain level of "detail" is needed; however I can't shake the feeling that the level of abstraction is still too granular.  There is no doubt a good scope for decision making.  There is nothing fundamentally wrong with the methods used, and I am sure they give a fine game.  There are some points I think they abstract better than others in the rules.

You can follow Blood and Spectacles Facebook page for more fun: https://m.facebook.com/pg/BloodandSpectacles/posts/?ref=bookmarks&mt_nav=0
Or our website:
http://www.bloodandspectacles.com/
Or our Messageboard:
http://bloodandspectacles.proboards.com/
Or our Wargames Vault Page:
https://www.wargamevault.com/browse.php?keywords=blood+and+spectacles&x=0&y=0&author=&artist=&pfrom=&pto=
Posted by Blood and Spectacles Publishing at 2:56 AM