I have been meaning to pick up these rules for about two years now.  I finally got around to it when they went on sale at the Wargame Vault as part of the Summer Offensive.  The price was hard to pass up and I ordered the PDF and a soft cover of the book.  Today, I will be looking at the E-book.  I also received a Desolation Planet edition which is full of really awesome artwork, but I am using the E-book for the rules.

Rogue Planet starts with a nice couple of paragraphs about what it is.  It is Sci-Fantasy.  What is that?  The book spends a lot of time telling you.  I think my favorite description was Sword-and-Planet instead of Sword-and-Sorcery.  The book points out examples of the genre such as Star Wars, Final Fantasy, and Heavy Metal.  I think we can all think of one or two others as well.

From there, Brent Spivey then spends some time explaining a bit of the flavor and his design philosophy for the game.  I am always a sucker for such designer notes.  Rogue Planet lands squarely in the camp of cinematic action.    To paraphrase the author: "If you find yourself wondering why a mechanic operates in a certain way, chances are the answer is one of the following reasons:
Well, what isn't to like about that philosophy?  So, now that we are marooned on Rogue Planet, let's see what we discover..... 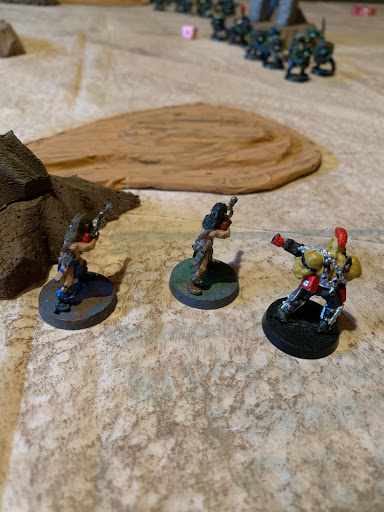 Things I Liked
I always am a sucker for a Scale and Model agnostic game.  Yeah!

The game starts each turn with a choice.  You can roll a dice to generate 1d6 action points, or you can play it safe and get 3 guaranteed.  The player with the most action points can choose to go first or second.  Now, everyone knows I am not a fan of action points BUT this initial choice is intriguing to me.  It forces a player to make an early decision that will impact the tactical play for the rest of the turn, and may impact initiative.  The player who had fewer action points last turn can roll 2d6 and choose the highest dice, a simple balancing mechanic.  All of this in the first actions of a turn.

The game uses a simple 2d6 skill check roll.  I like 2d6 as it gives a nice curve of results.  7+ is a partial success, with 10+ being a complete success.  Interesting, if you fail a skill check your opponent gains two free move activation immediately.  A success of 7-9 also allows a single opponent activation for movement.  That means every time you pick up a dice, you are risking allowing your opponent to act.
Some units or equipment can access and use something called a "Rogue Die"  It is rolled at the same time as the skill check.  If the Rogue Die matches one of the other dice, it could trigger additional benefits.  This is separate from Crits and the like.
Movement in this game is entirely free-flowing and promotes terrain placement.  Why?  When moving a unit can move as far as they want in a straight line until they interact with terrain or are halted by the opponent making a Counteract action and using Action Points, which are a limited pool.  Therefore, if you pick up the dice and fail, your opponent can potentially really exploit the situation.  In addition, there are no ranges, only engaged in melee or available to shoot at.  There is no measuring in this game.
In addition to having a random Action Point pool generated at the beginning of the game, players also have a pool of energy.  This can be used to help save models based on their armor.  However, it is a limited pool and once it is out, it is out.  Choose how you use it wisely.   The pool size is based on your forces construction. 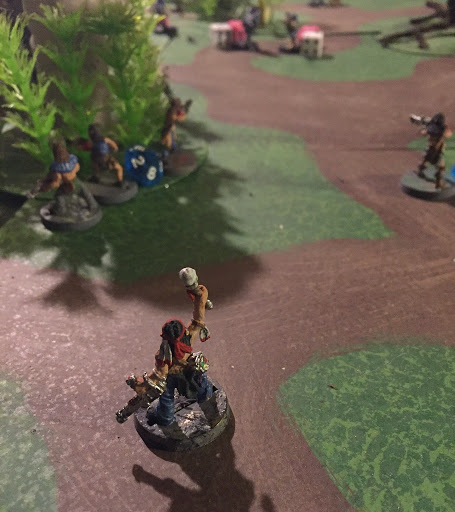 Things I Did Not Like
As we have mentioned, players get 1d6 (or 3) action points a turn to activate and use any of their models anyway they wish.  All actions cost 1 action point.  There are some rules about no more than 2 consecutive actions (Heroes get 3), but it would have been much easier to just give everyone 1 action.  I suppose this forces you to decide who and how you want to use each model, but it could also just lead to your champion getting the bulk of the actions while the others cheer them on.
Modifiers are capped at +3 and -3.  The caps are a bit confusing as why maneuver for maximum effect?  It is capped anyway.  However, the difference between two opposing units ability scores will also be a modifier.  Ability scores range from 2-7 so if a combat ability of 4 went up against a combat ability of 7, the difference would by +3.  However, the bonus only applies to the active units.  This game has a lot of modifier calculations to apply to that initial 2d6 roll.
Doubles rolled on the 2d6 can trigger a critical.  Criticals make using energy expenditure to save the target much more expensive or impossible.

Since the game uses no actual measurements, there are some events or effects that DO need a standardized measure.  The game uses the width of three fingers.  This is a method I have used myself in various dexterity games, but those are different types of games than this wargame. 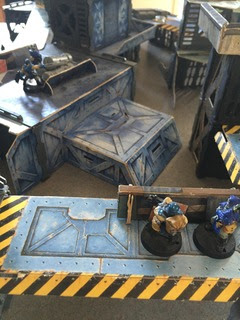 Meh and Other Uncertainties
The game also allows the non-initiative player to spend action points to counter-act to things.  You know dodge, counter-charge, return fire, that kind of stuff.  However, the active player can not counter-counter act.

Of course, as a model and scale agnostic game that means it must have a way to create and stat up models.  There are several pages on creating stat lines, armor values, weaponry, skills, Hero abilities etc.  It is pretty straight forward and easy to use.
The game outlines 4 different "power levels" to play the game at.  This sets some limits on what can or can not be taken and gives players a way to scale their games and units to be of roughly equal power.  In addition, there are 6 scenarios.  Lastly, there is discussion about multi-player games too.

There are some extra fun combat actions besides just moving and shooting.  These include throwing objects, destroying terrain, colliding, staggering a foe, etc.  One of these is that when a enemy unit is in Treacherous Terrain, your opponent can choose to spend an Action Point to have the Treacherous Terrain "attack" that unit.  Nice additions to add flavor and chrome.

The Desolation Planet version of the book has some amazing artwork!  Love it!  Some example models linked to game rules/profiles could be helpful though.  Afterall, the FAQ specifically calls out that these rules could be used to play out a grim, war-torn, gothic future! 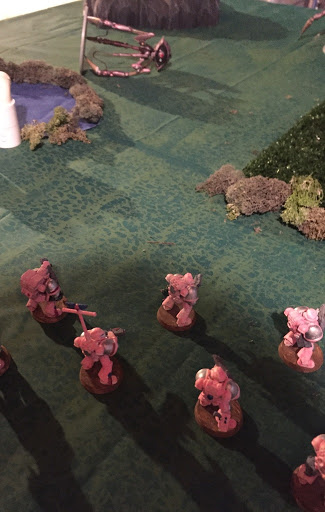 Final Thoughts
Who doesn't love a good scale and model agnostic game for sci-fantasy games!  This will allow you to bring whatever you have to the table and play an interesting and tactically challenging game.  For a 24 page rulebook, this game covers a lot of ground and allows for a wide variety of situations, models, and stuff.
This game has a lot of interesting and good ideas.  However, I can't help but think that as a whole the game is a bit over-engineered.  In that respect, it reminds me a bit of Pulp Alley where there are a lot of great mechanics and ideas, but perhaps too many in one game system.  I can't shake the feeling that it is trying a bit too hard, and is therefore a bit challenging with all the minutia of when to do what when.  A good quick reference guide seems like it is a must have for this game.  Thankfully, one is provided when you buy the PDF!
That being said, if I compare it to other scale and model agnostic games in this genre it has a lot of positive things going for it.  Customization and unit creation is pretty simple.  The power scales also allow you to do some sort of "escalating" campaign.  I think the rules give you enough lee-way to do some fun stuff, and the FX and Rogue Dice allow for some "cinematic" moments to be created as well.
I just need to figure out how I want to use this game for myself so I can get it on the table.  The game feels geared to a hero model and a couple pawns, with a group or two per side.  That fits small scale skirmish, but I could also see it being usable Mode vs. Model too.  Now I am rambling as I think about how to use it myself.....
Anyway, this looks like a solid set of low model count rules that you will want a good FAQ to play the first couple times.  I will probably play it a few times.

You can follow Blood and Spectacles Facebook page for more fun: https://m.facebook.com/pg/BloodandSpectacles/posts/?ref=bookmarks&mt_nav=0
Or our website:
http://www.bloodandspectacles.com/
Or our Messageboard:
http://bloodandspectacles.proboards.com/
Or our Wargames Vault Page:
https://www.wargamevault.com/browse.php?keywords=blood+and+spectacles&x=0&y=0&author=&artist=&pfrom=&pto=
Posted by Blood and Spectacles Publishing at 1:12 AM