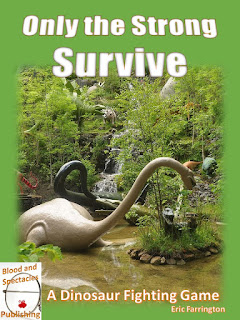 Through this series, we have been exploring the '”evolution” of a game system from the initial concept, to filling out the 4Ms, to the turn sequence and activation process. The Concept and design parameters are the heart of the game. The 4Ms are the skeleton while the activation process is the muscle and sinew.

Today, we are going to be talking about the next step which is building out the units profiles and then adding the chrome. To extend the the metaphor, Unit Profiles are the nervous system of the game. Meanwhile, the Chrome is all the additional elements that make your game stand-out and give it that special hook, that “little something” that make people really want to play it. 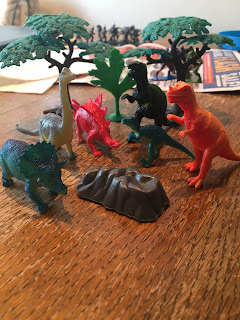 Putting Together the Basic Profile
If you go back and re-read the section on the 4Ms and the Activation process, you will see that the basic unit profile is pretty well sketched out for us. All the building blocks are there as every profile needs to be able to talk through the stat lines to make the 4M's possible. So, let's break down a unit profile for Only the Strong Survive from there first, and then we can talk through filling it out.

Looking back, we can see that movement was going to be based on a movement template process where a Dinosaur can be Slow, Normal, or Fast. Therefore, we all ready know the first step on the unit profile is the Dinosaurs speed. In addition, I want to add a shorter band to the template called engagement range, dinosaurs at or inside this distance can fight. The initial 4M's were unclear on this process.

We also talked about a dice pool that would deplete as it was used. There were three main needs from this dice pool, Attack, Defense, and Reactions. Players could allocate dice into these areas, but once used they were gone until they replenished at some point in the game. Therefore, we will probably need a maximum number to be allocated per turn. That means we have 4 stats for the stat line all ready.

The 4Ms also referenced an Armor value where hits needed to exceed this amount to stick on the dinosaur and reduce its damage track. Therefore, we need two more stats for the Profile, armor and a damage track. Our desired Act/React system was predicated on rolling reaction dice and successes would allow you to react in certain ways. Therefore, we need a reaction chart four our profile as well.

Lastly, we talked about dinosaurs have different attacks in different arcs. After all, a T-rex can not chomp on something behind it. That means we will need to list out some unique attacks and their combat arc at least. Therefore, the basic profile would look something like the following:


The profile was all driven by the needs of the 4Ms. Therefore, without the understanding of your games 4Ms, you would not be able to make the profile. In addition, we verified earlier that the 4Ms we discussed align with our design goals. Good.
Adding Shiny Chrome
Now, before we go further, I want to shift our attention to Chrome. Chrome is essentially that little something special that takes your mechanics from yahtzee to something a little bit more. They are additional decisions or hooks for players and often take the form of special rules or situational items. Only The Strong Survive has places for Chrome built into the core 4Ms, it is now a time for us to think about how to exploit them. First off, let me take a moment to identify the built in locations for some chrome. Then we can talk a bit about how to make chrome work.

I left space for chrome in the rules in three primary areas. Those areas are the Damage Track, Reaction successes, and in the Attacks section of the rules. How did I identify these areas for chrome? Well, the exact outcomes were not clearly determined in the 4Ms. We know a successful target number result on the Reaction die allows a reaction, but what kind of reaction? We know attacks can reduce the Damage track until a Dinosaur is dead but what happens when it is only injured? We talked about an attack doing damage by successes above the Defense and reduced by armor, but different Dinosaurs have different specialized attacks, what are they? As you can see, some gray area around results can allow for space to add Chrome.

So, now that we have identified opportunities for Chrome, let's talk a bit about how chrome should work. Ultimately, Chrome should be a result beyond the the basic mechanics, but still in alignment with the concept of the game. Typically, it does one of the following things:


Now, chrome is a dangerous business. If you are not careful it can lead to If This/Then That rules which lead to confusion rather than interesting game play. Typically, chrome should be a balance of risking something versus a potential greater reward. For example, a special attack might have a higher target number to be successful but when it does potentially inflict more damage. It could provide a different advantage than just straight damage, like a push back or knock down. It is a chance to create a decision point for a player, and is another way to try to build in some Tactical Play. Try to use chrome sparingly and make the same general chrome apply to multiple units. This way you avoid chrome actually breaking your game either unit by unit or entirely.

Building the Allosaurus
One of the mantras I have been spouting off about during this whole series has been to do your research. I know almost nothing about the Allosaurus. As I have mentioned, I am not a paleontologist or scientist. My knowledge of Dinosaurs comes from my younger family members, the internet, and the MST 3k episode of The Beastof Hollow Mountain.

Yeah, so after that inspiring clip I decided to set out to make the stats for the fearsome Allosaurus.

Here are a couple things of note about Allosaurus from my research:


There you go, now let's compare this to the our basic profile and start to put something together for “Big Al” for Only the Strong Survive.

Push Back- Target Dinosaur is pushed back slow Distance
Knock Down- Target Dinosaur maybe knocked down if it fails to make any success on a Reaction test
Tearing- Dinosaurs with armor of 1 count as armor 0.

There we have our first Dinosaur combatant! All of that could fit nicely on a small card.


Creating a Stegosaurus
I know even less about a Stegosaurus than I do about the Allosaurs since they weren't in an MST3K! Well, at least that I recall. I do know from my research on Allosaurus that the two were Jurassic time period enemies, so it makes sense to make an opponent for play testing the basic game rules.

So, let's see what we can find out about good old Stegosaurus:

Now you know, and knowing is half the battle. The plates probably were not armor, but instead used to radiate heat or for display. However, I think they are more fun in this game as armor plates. I get to make the final call for Only the Strong Survive.

There you go. We know have some combatants to play around with.

Conclusion
You can see how the previous work we did at each stage built on each point to allow us to build profiles for our units quickly and easily. However, once you have some profiles created, the real work is just beginning. Now, you have to start actually hitting the table and seeing how the units interact with each other in different combinations over and over again. This process will let you see where your basic model works, what chrome is too powerful, and other small items you will have to go back and tweak a bit. At this stage, you are looking for big time game breakers and flaws more than intimate balance.

The big rocks of the game are now done if you want a playable one-off game. Time to start getting some of this stuff written down someplace! The only elements left for a complete game are what I like to call the Value-Adds. We will discuss those in the next installment.

Posted by Blood and Spectacles Publishing at 2:36 AM