Polanksi's Lancers were contracted to harass operations on the Planet of Mundos.  The primary export was timber and wood products.  Therefore, the Lancers were focued on attacked executives, storage facilities, and other infrastructure.  Their employer Lacstar Inc, was in negotiations to purchase the Timber rights from the VolSaab Corporation, and any disruption to supply would cause the stock price to drop.  This would make buying the rights much easier.

VolSaab was wise to such actions.  Therefore, they had contracted out to two mercenary units to operate on Mundos to help protect their investment and get the best sale price of the rights.  The Rose Guard and Thor's Hammers were providing security on Mundos.

Today, the 14th Ulhans of Polanski's Lancers have planned to strike at a early staging factory near the equatorial forest region.  Volsaab had built a number of logging and transport roads through this region so transports could bring newly cut lumber to nearby processing plants.  The Lancers decide to use this network to strike at the processing plants.

Near the lunch hour, Mecha from the Lancers were sighted by truckers moving along the road towards the Earl G. Howanzer Plant.  The plant had a contingent of Thor's Hammers on station, but additional reinforcements were requested from the Rose Guard, who dispatched elements of the 3rd Thorn Guard to assist in the defense.

Today's battle was a rematch between myself and my family in a game of Rampant Stars.  I have found the rules for Rampant Stars work very well for streamlined Mecha combat as well as Unit-vs-Unit battles.  We pretty much used the same army lists as we last used on Mundos that were built by gut feel rather than any actual point system.

Forces
The Lancers used a variety of Irregular Light Mechs with speed upgrades backed by some Regular heavier units.  If I recall, there were 4 Irregular Lights and 4 Regular Armored units with various additional upgrades.

Thor's Hammers had 2 Regular Mechs and 2 Irregular ones with Armor upgrades.  The Hunchback also had a Heavy Weapon upgrade.  That thing had caused me headaches in the past.

The Thorn Guard had 3 Regular Mecha with armored upgrades, 2 with some sort of shooting upgrade, and 1 Irregular light mech.

Looking at them now, these probably aren't that balanced, by such is life.

Mission
The Lancers needed to target the enemy factory and reduce it to 0 hits.  it started with 10 Effectiveness points.

Set-up
The board was a 4x4 foot board.  A dirt road cut across the board diagonally.  A forest took up the south corner.  Two large areas of fields were also present on the opposite side of the board.  The Factory was next to the road on the Northeast side of the board.

The Thor's Hammers were deployed within 6 inches of the Factory.  The Thorn Guard were coming in as a clump from the Northern board edge.  The Lancers were in two groups.  The Lights led by a Regular mech were coming down the road.  The rest were emerging from the wood line at the board edge. 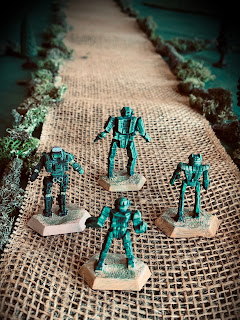 Battle
As this was a battle against my family, my notes are not as clear as they normally are.  I spend a lot more time interacting with them than taking notes.  However, the following is a general idea of how the battle flowed.

The Defenders went first and started to move out to defend the facility.  The Hammers were careful to stay within command range of their officer as they moved towards the fields to intercept the larger mechs emerging from the woods.  Their Hunchback was leading the way.  The Thorn Guard also moved up to support.  They were intent on getting between the factory and the attackers. 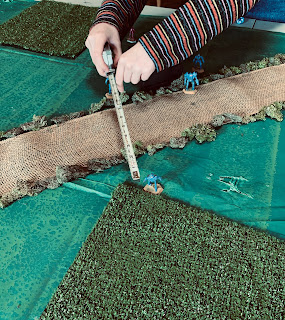 Some poor command rolls by the Lancers on the roadway led to a slower than expected advance.  Their emerging support forces had a similar comms issue due to the dense jungle canopy.  The Lancer leader led the way and took a series of long range shots at the Hunchback, that did nothing more than tell the Hunchback pilot the range of his opponent. 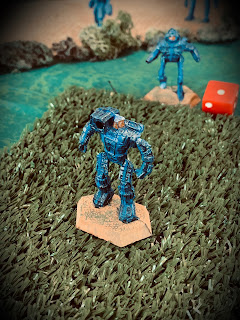 A devastating return barrage from the Hunchback simply shredded the Lancer leader for his impudence and reduced him to 1 hit.  He promptly fell back to avoid utter destruction.  Soon, the h\Hammers were taking up defensive positions in the fields, while the Regular Lancers warily moved in taking potshots as they approached.  Thankfully, effective ECM warfare from the Lancers kept the Hammers on their toes, unable to get a clear understanding of the situation. 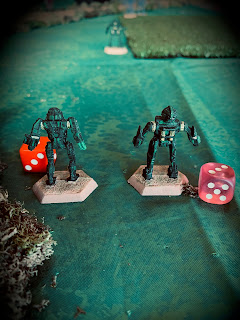 Meanwhile, the Thorn Guard took the approaching Lancer Hit and Run force head-on.  It quickly turned into a close range particle beam fight as the little guys closed in rapidly with fire support from their larger brother.  The Thorn Guard officer spent most of the battle on the Comm-Link to command relaying data while his troopers did the hard work. 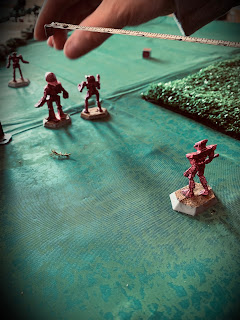 A heavily damaged Hermes II charge the Panther Regular mech to try and clear a path to the factory.  However, the larger mech quickly disposed of the little guy by kneecapping him with a swift kick, and then a stomp to the face.  That was a decisive moment, as despite taking several missiles, rockets, cannons, and beams the Thorn Guard was dishing it back out.  As another Light Mech went down and a third was shredded down to 1 Effectiveness Point, it was clear that the Thorn Guard line was going to hold. 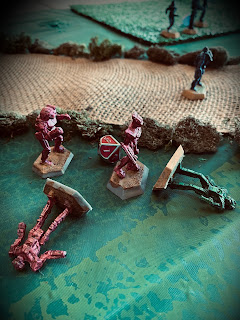 On the other Flank, the Hunchback absorbed a lot of damage, but ECM kept the Thor's Hammers from striking back decisively.  Then, the ECCM managed to clear the static long enough for the Dragon and Whitworth to focus fire and severely damage an approaching Lancer Quickdraw.  They had decisively turned the battle on the flank as well, and the link up of the Regular Lancers and their lighter vanguard no longer looked possible. 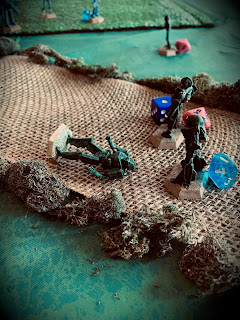 A devastating salvo of firepower also took out the final mecha in the Lancer road assault.  It was clear the battle was lost and the Lancers fell back into the jungle to lick their wounds. 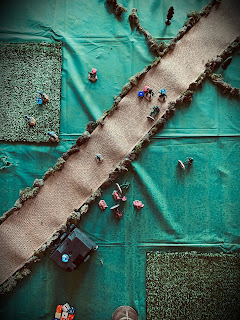 Conclusion:
The Thorn Guard lost 1 Light Mecha, and had 1 Regular Mech heavily damaged and crippled.  Thor's Hammers had 1 Mech crippled and another lightly damaged.    However, the factory was unharmed as the steel wall was not breached.

The Lancers lost 2 Light Mecha, 1 Regular Mecha, and had a Light and Regular severely damaged and crippled.  They completely failed in their objective.  The LacStar contract had been big....  but maybe not THAT big.  So far, the Lancers have lost every engagement on Mundos that they have fought in.  Maybe it was time to withdraw with some of their reputation intact..... 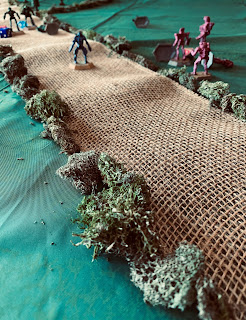 My initial attack ended up going in a bit piecemeal due to some command difficulties.  I did not do as good of job as the Thorn Guard and Thor's Hammers keeping my Leader in range to get the activation benefits.  However, soon, they were also having command problems and I started to shift my Regular Mechs over to link with the lighter vanguard.  However, I spent a bit too long obsessing about the very dangerous Hunchback and not enough time on the objective.  Ultimately, this lack of focus caused me to loose the battle. 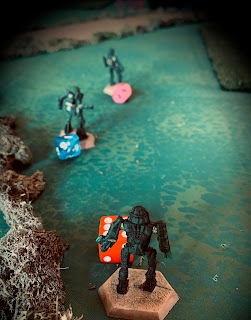 Overall, Rampant Stars has again proven to be a fun, quick little game that was fought in about an hours time between 8-10 units per side.  We didn't really use any of the scenario, complications, or location rules for this one.  Instead, we quickly set-up a board, got our models out, and made an objective on the spot.  I am pretty sure that point-for-point the Lancers were out numbered, but it was a fun family game over the afternoon.  In that sense....


Posted by Blood and Spectacles Publishing at 2:54 AM