On the wooded planet of Mundos, the mercenary company of Polanski’s Lancers had been contracted by Lacstar Incorporated to disrupt the operations of their rival firm.  The Lancers had limited success in their efforts.  However, incomplete intel provided by Lacstar made operations difficult.  The CEO of the Lancers decided to perform a recon in force to try to explore and more completely map Mundos to help plan appropriate operations to meet their contractual obligations.
Of course, Volsaab Incorporated did not want their operations disrupted.  They contracted out with the Rose Guard as general site protection.  Once the activity by Lacstar surfaced, they contracted out with Thor’s Hammers to provide additional punch on Mundos.  The two CEOs would have preferred the contracts for their respective merc companies, but a shared contract was better than no contract.
Electronic snooping and surveillance tipped the two allied Merc groups to the 14th Uhlans of Polanski’s Lancers activity.  They managed to deploy to counter their reconnaissance efforts.  The Rose Guard and Thor’s Hammers objectives were to deny the vital information to their enemies and destroy as many of them in the field as possible.
It was InternationalTabletop Game Day, and my family decided to celebrate with some tabletop gaming!  I was as surprised as the next reader of the blog was.  To that end, I had to come up with a game for us to play and right quick!  With that, I pulled out some old sheets I had made to use Battletech models for games of Rampant Stars.  I fluffed out a few additional units, and in a few short minutes we were ready to play with my wife and daughter teamed up against me.  I think we all know how this is going to turn out all ready!

Forces:
I am not going to go over them completely, but on Team: Family they had 8 Mecha.  For the most part, they were classed as Irregular Infantry with their Command mechs as Regulars.  They all were up armored to armor 2, with the Dragon and Cyclops up armored to armor 3.  Two had the either Rapid Fire or Armor Piercing Upgrades.  Then, the Hunchback had a Heavy Weapons upgrade to make it the most powerful weapon system on the board. 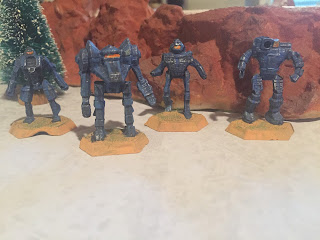 On my side, I had about 10 mechs.  They were all Regular Infantry.  I had three light mechs that were not up-armored, but had rapid movement.  I had 3 mechs with rapid-fire or Armor Piercing upgrades.  The rest were line mechs with armor upgrades to 2, and I had 1 mecha that was up armored to 3 armor points. 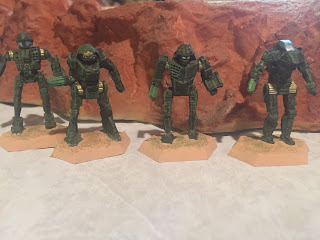 Mission:
We randomly rolled up the “explore” mission.  This means there were 6 tokens scattered across the board.  You could collect a token by getting a model within 1 inch of it.  Once collected, it was removed and placed on the players’ side of the board.  The team with the most tokens would win.

Set-up:
We played on a 4x4 board.  The edge of the board was a river with brush on the shoreline.  The opposite side of the board had a large forest with jagged rocks projecting out into the board’s center.  This made a bit of a clear valley between the river and the forest.  The markers were placed at various random points along the center line.

I placed a couple of light mechs near the edge of the forest to rush in and try to grab the objectives there.  The center was my heavier mechs, led by my assault mech with the best armor.  He was going to take the hits while a light mech got ready to dodge beyond and grab objectives.

My opponent set up with one of their command mecha to go into the woods supported by the Hunchback.  The rest were going to storm across the center and shoot me to pieces.

The Game:
Sadly, I was to busy playing and did not have the best notes from this game.  I do not have turn by turn specifics.  However, I have enough of an overview.

My light mech heavy force was advantaged by the scenario, and I expected to grab objectives early.  However, this early advantage was off set a bit by poor Command Checks that left some of my faster mechs at the start line.  The same happened to my wife’s light mech as well, so the heavier units took the lead on the advance early. 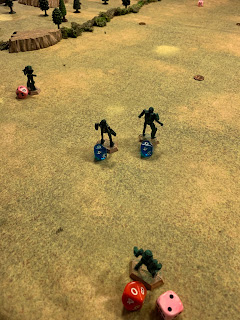 Like I suspected, I was able to get my lighter mechs going and grab an early lead, going up 3 objectives to two.  The main formations closed in the valley and traded shots.  Most of it was a side show holding action while my commander, and two light mechs dashed for the last objective in the woods.  In the meantime, my families’ had a Dragon and Hunchback trundling into the area and closing fast. 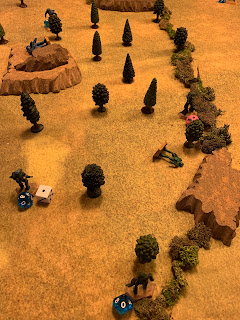 The Hunchback hunkered in and provided devastating cover fire despite the cover and speed of my lighter mechs.  One of my light mechs was blown to pieces without firing a shot.  In addition, my Command mech took a beating.  I was further hampered when my remaining light mech failed a critical command check. 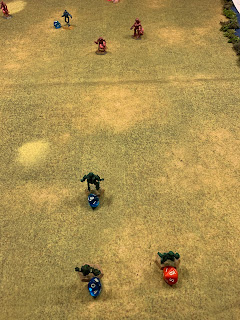 Despite taking a beating of its own, the more resilient Dragon mech managed to grab the last objective.  The Dragon command mech was then torn to pieces and destroyed by fire from my Commander and a light mech.  Too little, too late.  We finished off the shooting, a couple mechs were severely damaged in the valley as well. 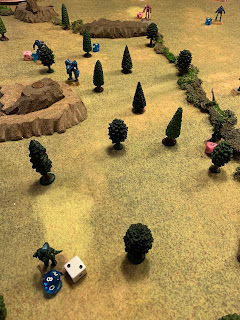 Conclusion:
The battle was technically a draw, however my lighter forces took a beating in the process.  I lost 1 light mech and took twice as much damage on the rest of my force.  I had to withdraw two other light mechs to avoid destruction.  However, it was a bit of a moral victory to take out one of the enemy joint Commanders in the battle, take that Thor’s Hammers!

In an odd twist, two of my opponents mechs only left the baseline in the final turn due to Command failures.  1 of their lights and a line mech never got into combat….. and I still took the worst of the fighting!

Overall, RampantStars makes for a quick, brutal, and fun mecha game too.  The entire game with set-up and takedown was about 90 minutes.  The longest part was setting the board up and statting up the mecha.  The game itself went very quickly with a mad scrambled followed by an intense firefight.
Posted by Blood and Spectacles Publishing at 3:39 AM