With their cover likely blown, the Throne Agents of Inquisitor Xanatos had a difficult decision.


Led by Sgt, Major Bathory; they decide to use the direct approach and raid the gang's hide-out. At the safe house, Father Robertus and Twist lead a long and successful interrogation. Ultimately, they find out what they needed to know and administer the Emperor's Justice to the perpetrators. The Inquisition is not know for their mercy.

Soon, the trio of Throne Agents finds themselves making their way through the cramped, ill-kept, and dark zones of the lower mine works deep in North Ammoriss. They locate the back entrance to the gang's hide-out. Normally, it is used as an alternate escape route for raids and attacks by rival gangs.

Immediately, the team realizes something is wrong. There are no guards stationed at the doorway as a show of force. The group quickly and silently accessed the entrance and made their way down the spirally, rock carved stairs and into the den of the beast. Again, nothing was right as the group closed in on the lair.. A determined silence hung over them. As they approached the main chamber, a far to familiar smell greeted them. The smell of carnage.

Someone, or something had gotten their first. The room bore the marks of a fierce battle, The scent of ozone and bloodshed was strong. Corpses were strewn across the compound where they fell. As they searched the team quickly realized everyone was dead. However, there was no sign of theft and looting like normal gang warfare. It was obvious that someone was tying off loose ends.

The team quickly realized this was a dead end and withdrew the way they had come. Their nerves were not settled by what they had uncovered. As the throne agents emerged, they realized their fears were not misplaced. Around them in the mine works were shadows, shadows that moved unnaturally. Red eyes glared at them. Tattered red robes hung around glittering silver webbed bones.

Murder servitors were closing in on them.


Mission:
The Agents need to escape the board on the opposite side as the Murder Servitors close in. The Throne Agents are positioned within 2 inches of the entrance to the Gang's Lair. The Murder-Servitors are positioned anywhere between their board edge and the center of the board. This uses the “Escape Into Danger” scenario from the main book.

Set-up:
The Throne Agents have one of the board edges that is sealed by an Ad-Mech support wall. In the center is the entrance to the gang's lair. This is where the Throne Agents will be deployed. The board is 3x3 and scattered with rocks outcroppings, a slag heap, and a few refuse pits for cover.

The Murder-Servitors are coming in a loose circle. 2 are coming from each board edge.

The Sgt Major sprung into action on years of combat training in warzones across the sector. Survival instincts began to dictate his movements, as he called Twist to move forward. He quickly pulled his las-rifle into his combat stance and fired on the nearest …. “thing”. His shot was true and sizzled into its chest. However, the abomination just stumbled onward. In fact, they all closed in with their glowing red eyes remorselessly cutting through the darkness. 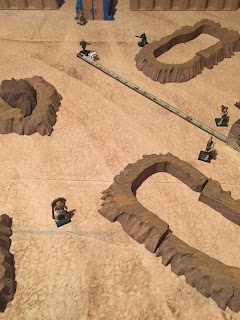 Sgt. Major Bathory continued to lay covering fire with his las-rifle. He breathed a sigh of relief as his aim was true and shattered the skull of the thing he shot. It stumbled forward and fell over, it's limbs twitching obscenely.

Father Josephus and Twist moved up under the Sgt Major's covering fire, but it was clear he would not be able to kill them all at range. Father Robertius readied his iron clad staff, his symbol of office as a Drill Abbot at the Schola Progenium. Twist drew out his large knife and got behind the Father.

The Deptartmento Munitorium issued las-gun flared to life once more, and another of the beasts was seared. However, it pressed on wards and crowded in on Father Robertus and Twist. His fellow creature joined him, with his clawed razor, skeleton hands swiping at the Throne Agents. 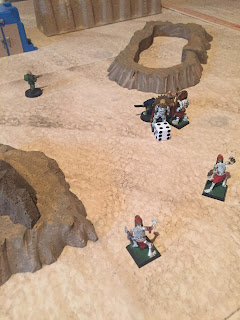 With battle joined, Father Robertus chants a litany of Hatred and weighs into his opponent. The flashing skeletal blades fail to find their mrk, and the good Priest lays the abomination low with a mighty blow that shatters its skull. Twist is less fortunate, and the murderous claws send him to the ground with multiple slash wounds.

The Imperial Guard veteran burst fires his Las-gun at one of the oncoming skeletal machines, but fails to do anything more than scratch it. The wade into Father Robertus and try to bring him down with numbers. 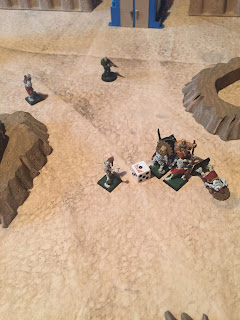 This close, it is obvious to Father Robertus that these abominations are simple Machine-God puppets. They are nothing more than murder machines built off the rotting corpses of fellow humans. They are affront to the God-Emperor given form of Man. A righteous hatred fills him as he smashed another of the foul things into the dirt, its body smashed asunder.

Sheltered by the whirling maul of the preacher, Twist manages to regain his feet. The Sgt Major moves to evade, and fires into one of the Murder-Servitors. Again, a true shot fails to stop the creature.

The last two mechanical assassins shamble into combat. The Sgt. Major draws his bayonet in the nick of time. Meanwhile, Twist prepares for combat again.

Combat is swirling and furious. The God-Emperor guides the strikes of Father Robertus as he flattens a third murder-servitor in combat. Twist manages to sweep the legs out from under one and causes it to fall to the ground. The Veteran guardsman is not so lucky, and the murder-servitor knocks away his guard and clubs him along side the head, causing him to fall unconscious. 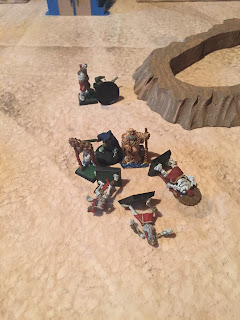 Father Robertus knockls downs the last Servitor he and Twist fighting with. Twist leaps upon it and stabs it repeatedly until it stops moving. His own blood dripping down his face.

Leaving the fallen body of Sgt. Major Bathory, the last murder-servitor rushes in to engage with Twist and Father Robertus.

Father Robertus smashes the last skeletal machine to the ground. Again, Twist finishes the job with a flurry of blows tot he servitors vitals. The light slowly goes out of the machines eyes. The entire cavern is plunged into a cold, silent, after battle stupor. It is then that Father Robertus and Twist realize that their comrade has fallen. 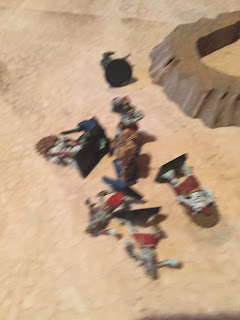 Twist and Father Robertus rush to tend to the wounds of their friend. They are relieved to find him unconscious but relatively unharmed. He wakes up a few moments later with a splitting head ache, and some choice words for the God-Emperor, the Machine God, and the forsaken planet of Ammoriss.

Meanwhile, Father Robertus investigates the Murder-servitors closer. He is dismayed to find that they bear the mark of the Red Tower of Ammoriss. In addition, they bear the marks of a fresh, recent combat before this one. The only logical conclusion is that they were involved with destroying the Gang hide-out and those within. Father Robertus gave thanks to the Emperor for surviving.

The Throne Agents manage to sneak back through the tunnels and back to their safe house. The connection between the smuggling Adaconite gangs and the Red Tower of Ammoriss leave them wondering who they can trust.

After the Game, Father Robertus gained 1 Clue (Map Piece) and 1 new skill. I chose Surly (Word of the Emperor) that can be used to cause fear. Since the Throne Agents won, I selected Sgt. Major Bathory to get the upgrade for free and I pick the skill Firearms Enthusiast for him.

I didn't manage to get any agents off the board, but I did manage to kill all the Lurkers. Father Robertus was a man possessed today! His wrecking hammer was owning these Ancient Warriors, and they are tough SoBs. He is a murder machine worthy of the Drill Abbotts from Inqusitor.

Posted by Blood and Spectacles Publishing at 3:03 AM