The basic design was created by Warwick Kinrade who has since moved on to help create the Battlegroup line and also Soldiers of God.  In addition, the rules were robust enough that they were reformatted and used in the last Warhammer Historicals rule set called Richthofen’s Flying Circus which was a game about World War I dogfighting.  So, this game has somewhat of a pedigree to it.

With all that being said, let’s take a pre-flight walk through shall we? 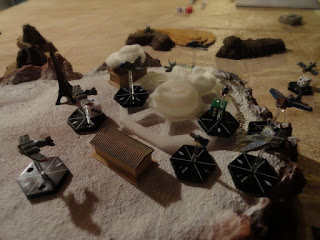 Things I liked
This is a game about aircraft and it uses altitude as a 3rd dimension.  The base of every aircraft is supposed to have two dials, one for speed and another for altitude.  As you change altitude, it will also impact your speed.  There are 9 altitude levels, with 0 being the ground.  In addition, the engagement corridor is slim, as you can only attack targets at the same altitude or one altitude difference.  Therefore, positioning in this game matters not just horizontally but also vertically.  To me, this is a must for an aircraft game as one of the only differentiators for aircraft games is the inclusion of altitude.

All firepower essentially has three ranges of short (up to 6 inches), medium (up to 12 inches) and long (up to 18 inches).  Within that a weapon has a firepower rating which is the number of dice you roll looking for a target number to hit.  Some weapons are good up close, others at medium, and others at long range.  This accentuates the need for good positioning and to try and jockey your weapon not just into a kill zone based on board position vis-à-vis your target, altitude, and also optimal weapon’s range.  This is easy to grasp as a concept but difficult to execute on the board.

At the beginning of the turn, each player chooses a maneuver card for their aircraft.  This includes high G turns, drifting to the side, going straight, loops, etc.  There are 9 different cards.  When you activate your aircraft you choose to change their speed with thrust (up or down), then begin to move.  You can play your maneuver card at any point in the movement.  You physically lay the card down and move the model the direction indicated by the card.  At this point, any speed and altitude changes take effect for the aircraft.  You can then finish any remaining movement.  This allows an aircraft to do a wide range of position changes, but it is limited to 1 per turn. 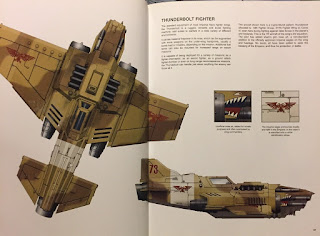 Things I Do Not Like
The game is dead now, but the initial buy-in for this game was relatively high.  It hasn’t gotten any cheaper.  I have made my own aircraft for many factions but the specialized bases are tough to come across.  I hate specialty dice, bases, etc for this exact reason.  They add a barrier to entry that is not needed.  In a pinch, a pair of 10 sided dice or recording off board will work fine, but the bases make life easier.

Changing dials and some maneuvers are pretty hard to do at the board level.  You end up taking the model off the board, moving the base ab bit, or other little adjustments that end up altering the play space a bit.  This can make it challenging to make sure everything goes back exactly where it started and that all your measurements are precise.  In friendly games, this is not an issue but when you start to get in the heat of the moment it can be a frustration point.

The game uses alternate activation by phase with movement phase, and then a shooting phase.  That means each plane essentially works individually and it is a challenge to coordinate your aircraft.  However, that is also part of the “skill’ of the game.  I actually prefer X-wings mechanic of using pilot skill to determine who shoots first.  If one player has more aircraft, they will have an advantage as the last aircraft to activate always knows where the others will be and choose the engagement.

The bulk of both book are pure fluff.  The game rules are covered in less than 30 pages and the rest of the two hard cover books deal with the aircraft.  This is purely narrative and the books are filled with great full page, color shots of schematics, color schemes, etc.  It is great to look at, but for the asking price it doesn’t add much to the game experience.  If you are familiar with Forgeworld books you know what I mean.

Some of the “official’ air force lists are maddeningly short role-player aircraft.  I am talking about transports, dedicated bombers, ground defenses, etc.  For example, the Chaos Raiders list is a fighter and a fighter/bomber.  Many missions need ground defenses and transports so this list does not have what you need for a basic campaign! 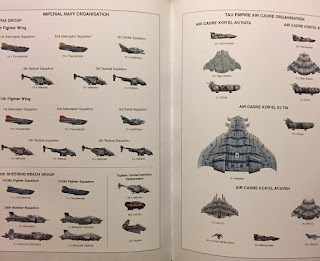 Meh and Other Uncertainties
The core turn sequence is choose maneuver card, initiative, tailing fire, move, and then shooting.  The player that wins the initiative roll-off goes first.  The game can end by hitting a max number of turns, reducing your opponent below their break point, or accomplishing mission objectives.  However, the last turn is always a disengagement turn before the end of the game.

The core rules cover a basic campaign, while the supplement book covers a variant type of campaign rules.  These allow you to link games and generate missions for your air force.  They are relatively straight forward.  The game also includes some “scenario” driven missions that are stand-alone missions.

The basic rules also cover a wide variety of situations such as ground fire, bombing, strafing, stalling, ejecting, special maneuvers, aces, weather, landing, hovering, etc.  These are mostly add-ons to make the game complete.  There is a short section on painting, making terrain, and some hobby stuff too. 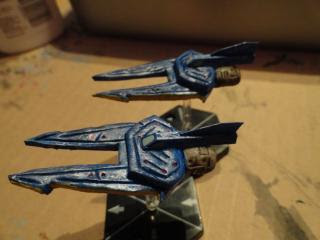 I personally adore this game.  I still play it and spent a lot of time making additional content for it.  This included online campaigns, new aircraft, new factions, new rules, and new missions.  I even learned to sculpt and made some of my own aircraft models for the game after the range was dropped.  The game has been officially dead for half a decade, and I bought in late in the games life cycle but I still play it regularly.

This game is very easy to learn.  The core rules are only about 25-30 pages and cover things you might not even use such as ground fire, tailing fire, landings, etc.  However, it is very hard to master.  Many of the mechanics force you to think about where you opponent is going to be and what maneuvers you have available to get you into firing position, without putting yourself in a position to get attacked.  Since it is alternate phase activation this can be a challenge and you are always thinking in this game.  It rewards coordinated effort and such coordination is not inherently built into the rules, making it a skill game.

I am hopeful that with the “return” of specialist games like Blood Bowl that Aeronautica Imperialis may one day see the light of day again.  However, with flyers in 40K I see no reason why GW would come back and revisit this game genre.  Too bad as this is probably one of their top three games that they have produced from a mechanics and game perspective.  If it doesn’t come back I won’t shed a tear since there is no reason for me to ever stop playing it!

Now that I have this review up, I have carte blanche to fill the pages of my blog with battle reports for this game! 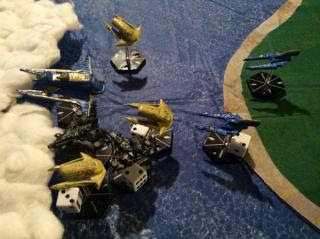 If you are interested in any of the additional content I have created for this game, you can go to the following places:

Campaigns:
War over Zephyrus
Investigation of Bin Mazar
Feud of the Red Clouds
Blood and Irongard
Hunt for the White Wyrm


Cleansing of Grex Silex
Posted by Blood and Spectacles Publishing at 3:45 AM