On The Painting Desk: Early Republican Romans- Down to the Triarri! 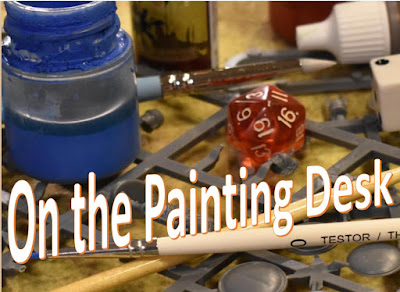 You may recall from my 2021 Goals that I was going to paint a fully functional Republican Roman army for Wars of the Republic by November of this year.  I wanted it to feature in some battle reports and other advertising for the new game from Osprey.  Therefore, I had to get it done to a deadline.

When we left off last time, I had finished batch painting all of their skin, sandals, and tunics.  I had also finished a unit of skirmishers and the command elements of the units.  However, none of them had shields as I paint them last and separately.  It looked something like this..... 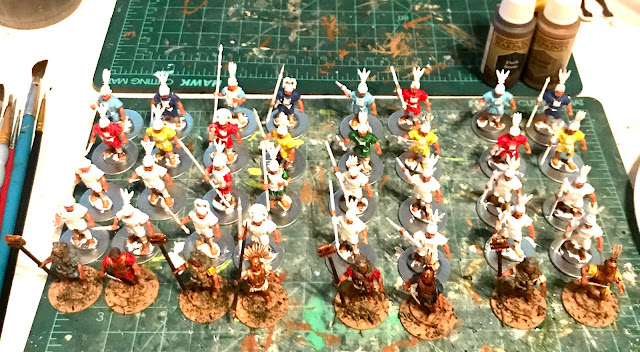 The army I was building was a standard 38 point force that was 5 Roman units for a game.  This was the size of the sample army lists in the rules, and the size of army I had used for play testing.  You may recall it had 5 units: Of course, I had enough Victrix limited minis to go bigger if I wanted too.  However this was the starting size I was looking for.  Since then, I also got some Romans in Hamata (chain mail) in the mail so my initial plan to have Principes and Triarri in Hamata was back on the table as a potential upgrade. 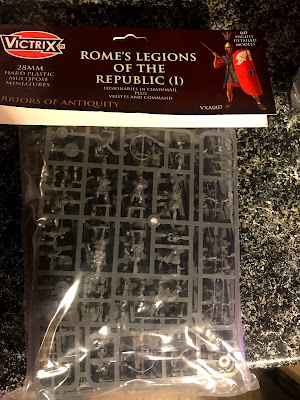 But first I wanted to finish this army in pectoral armor before I started an upgraded Lorica Hamata version of it!

It is pretty well known that the Roman army deployed in a three line battle line called the Triplex Acies.  The least experienced (and typically youngest and poorest) were the Hastati.  Since all Romans in the Triplex Acies supplied their own equipment, they had the basic gear to fight as a heavy infantryman.  They formed the first line.  The more experienced (and theoretically older and slightly more wealthy from booty) were the Principes who formed the second line of battle.  If the Hastati were wavering or getting tired, the Principes could step in and relieve them.

The third line was the oldest and most experienced troops.  They were called the Triarri, and were typically older and most veteran.  Instead of the usual short sword, big shield, and heavy javelins they were armed with spears and shields.  They fought closer to Hoplites than the rest of the Roman army.  There was a Roman saying that if you had just gotten through a tough spot that it had, "Gone down to the Triarri!".  Meaning it took your last line of defense to get you by!

With having completed all the batch painting I wanted to do, I decided to start painting unit by unit to finish each unit off before going to the next one.  Like a Roman Counsel deploying his force, I decided to start with my Hastati!  To differentiate them from the more experienced troops, I decided on two cosmetic aspects when assembling them.

This was intended to apply a visual short-hand on the battlefield to easily distinguish who was who.  After all the units were going to have a variety of tunic colors within their ranks.  All Romans brought their own tunics after all. 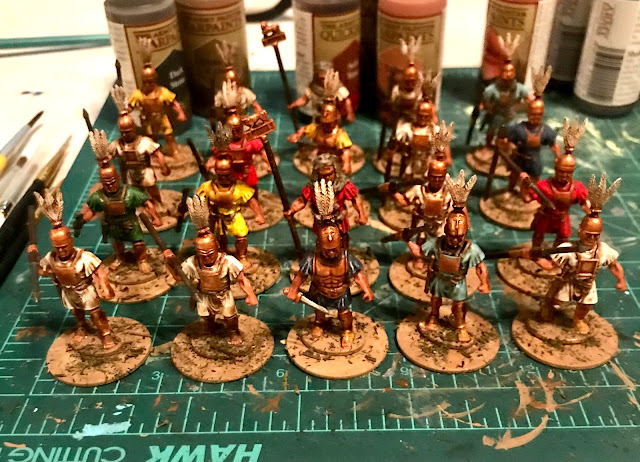 Unlike most times, I actually based them as part of the process instead of waiting to base all the army at once.

After that, I decided to paint up my Principe troopers.  They were the second line, so it seemed appropriate to paint them up next.  For visually short hand, I gave them all one helmet type and they were going to be using their gladius.  At this point, I also decided that the entire army was going to be using "white" feathers for their head gear.  I did a small bit of research and I guess ancient writers referred to them mostly as Red or Black.  Those tended to blend in with the models too much and the white feathers after a wash looked ace, so I stuck with that color instead. 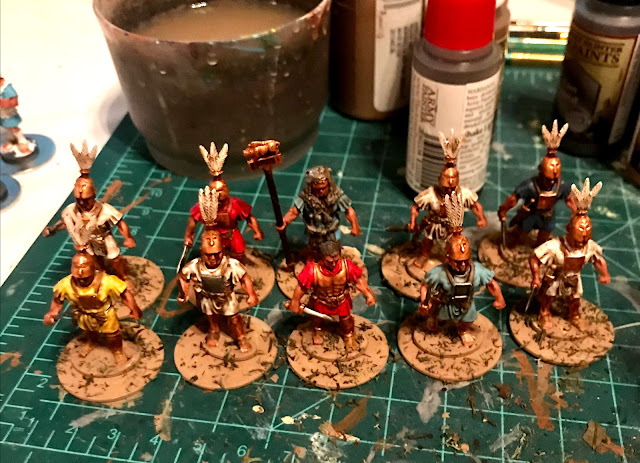 Once they get their shields, they will look ready to stomp some face!

Finally, that led me to the final unit..... the Triarri.  This army painting was getting down to the Triarri.  For this unit, I almost wanted a more traditional Hoplite feel with a few bronze cuirasses in there.  I also decided to use the Aspis/Hoplon shields for these guys instead of the Scutum.  Since this is very Early Republic I felt it would help it look more like a transition from the old Roman Phalanx into the new Roman Legion.  The obvious visual shorthand for these guys was spear and round hoplite shields.  You may also notice that they all have two greaves instead of one!  I did still kept the white crests, plumes, and feathers even though I was tempted to switch to a darker color. 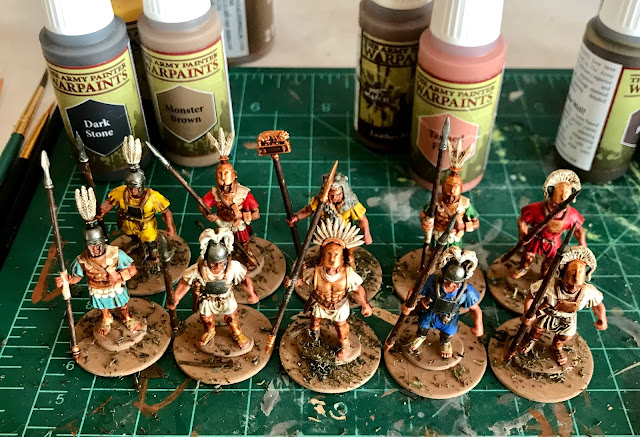 Well, that's it!  That is where we stand now.  All that is left is painting up the shields, getting shield transfers for them, and sticking them on.  That could be an issue since I have not even ordered any transfers for them yet!  Since these are Victrix kits, I think I will go with Little Big Man Studios transfers, but with Brexit I have no idea how long it will take for me to get them over here.  Even without the transfers, I can still get the shields painted up and put on for a usable force.  Then I will decide if I want the transfers or not. 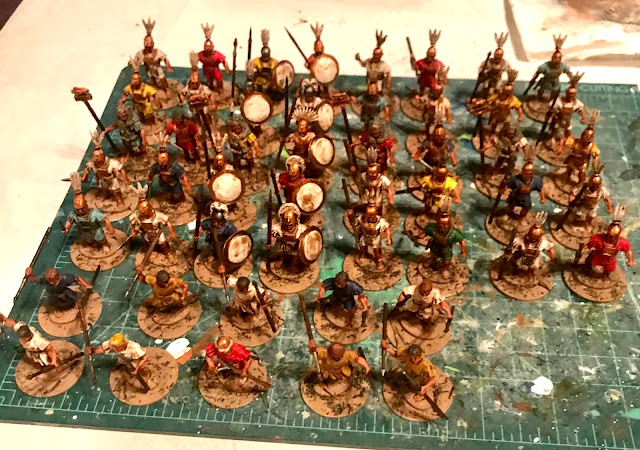 This is a pretty Early Republic force, probably circa the Second Samnite War around 326 to 304 BCE.  Most people paint the Romans with matching shields by unit.  However, I am not sure that would be the case during this time frame.  After all, each trooper was expected to provide their own gear.  I imagine that it was NOT uniform due to this.  Therefore, I am undecided if I want to paint the shields by unit or ad-hoc variations through out the unit.  Let me know your opinion in comments.

Hopefully, the next update will be to show the finishing steps for the army and to get it on the table for an army shot!  Then, I can move on to painting my next project..... more Romans but in Chain Mail?  I think I am going to make pretty much the same army but in Lorica Hamata this time......

In the meantime, you can pre-order your copy of Wars of the Republic here.

Posted by Blood and Spectacles Publishing at 1:29 AM