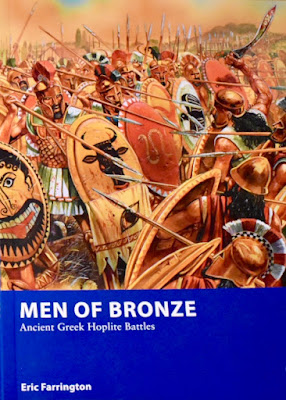 Men of Bronze is part of the Osprey Wargaming Series (OWG 24) and focuses on Ancient Greek Hoplite battles.  The focus was on Hoplite battles in the Archaic through Classic period of Greece from the rise of the City-State until Alexander taking the throne in Macedon.  Therefore, it encompassed a great deal of military innovation and development.

The focus was on Greece, and as Nick at the Irregular Warfare blog rightly pointed out at the time, there was a great deal of the Greek world of the time that was not covered in much detail.  I set about rectifying this situation with a series of Blog posts with expanded Lines-of-battle, scenarios, and campaign rules to allow Men of Bronze to expand beyond the famous Greco-Persian Wars, Peloponnesian Wars, and outside of Greece.  These expansions took us to Thessaly, Thrace, Sicily, Egypt, and beyond. 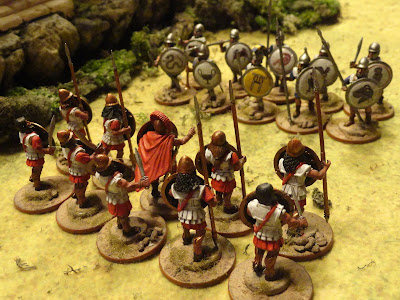 In addition, the original rules for Men of Bronze did not include any rules for fighting linked series of battles.  I am always a fan of campaign rules, so this was a big pain point for me.  Therefore, I also wrote and added Campaign rules for the system.

Finally, after publication a few folks had some good points that needed clarification.  Like all games, a FAQ was needed.  Based on these questions, I put together a FAQ.

All of this extra detail allowed me to put together the first supplement to Men of Bronze.  It is called Hercules Abroad and I have placed it on the Blood and Spectacles Wargame Vault page for purchase. 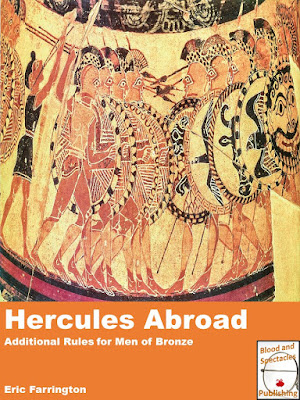 The name derives from the Greek practice of attributing their colonization efforts to the travels of Hercules during his 12 Labors.  These mythological foundations were used as justification to claim lands and create colonies outside of Greece proper.  In these outlying regions, the Greeks would often come into conflict with other indigenous or colonizing peoples such as the Carthaginians, Egyptians, and more.  Warfare in these colonies, often called "Greater Greece" or Magna Graecia; were often less orthodox than "traditional" Greek war fighting.

Inside the book, you will find new foes and Lines-of-Battle that expand the range of opponents found in the Men of Bronze rules.  These include some basic history, sample army lists, and each list also includes a new Historical Scenario to play to help catch the flavor of the list.  There are 8 new factions, some with multiple Lines-of-Battle to better reflect their evolving military structures.

In addition, the booklet contains rules for running multi-player campaigns for Men of Bronze.  This allows players to link their games together into a larger narrative or campaign.  They are designed to be loose so that players can create their own narratives in their own spaces of the Greek world.  Thucydides and Herodotus do not cover ever battle or ever campaign that occurred in then Greek world.  These rules give you space to run "What If", ahistorical, and free-flowing campaigns of your own.  The can be used with or without a map, and can be used with any number of factions/players in the campaign.

The campaign rules are an element I try to add to all of my games.  However, space restrictions in Men of Bronze led to them being trimmed.  However, now with Hercules Abroad they are back in the game! 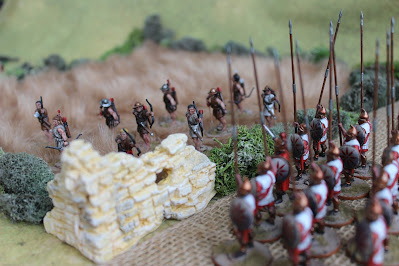 If you want to expand your Men of Bronze experience, I suggest you head on over to the Wargame Vault and pick up your copy of Hercules Abroad.

Posted by Blood and Spectacles Publishing at 12:14 AM