It is no secret that I am a huge fan of Warwick Kinrade's Aeronautica Imperialis game from Forgeworld.  I have played that since its release, and always find it gives a good game.  It is very simple to learn, but hard to master.  The positioning and various altitude bands make it a challenging game that requires a good deal of in game thought and pre-planing to get into the right position.  I love it.

With that being said, I have been working on developing my own Air Combat game but with a more historical bend to it.  It would have been very easy to simply "re-skin" the game I loved with new unit types to match the historical planes I wanted to use.  However, I felt like that would be "unrewarding" at best.  Therefore, I decided to try my own hand at designing a Korean Air War game.

This particular period is of great interest to me as the game needs to be able to accommodate late-WWII turboprop aircraft such as the P-51 and Yak-9 but also handle early jet fighters such as the Mig-15, F-80 Shooting Star, and the F-86 Sabre.  These planes have very different flight characteristics.  In addition, there were a variety of missions such as bomber interceptions, night-fighting, ground attack, and reconnaissance missions.  All of which would need to be incorporated into the game.

Below will be my first attempt at trying to playtest my early rules for the game.  The working title is White Star, Red Star based on the roundels used by US and Communist forces.  Eventually, I will probably include other UN aircraft as well such as the RAF, Royal Navy. USN, and the Australian forces.

The game is designed to be base, model, and scale agnostic as is my usual custom.  I have found aircraft of various scales for the game available online.  However, for playtesting I am going to use my famous Paper Templates.  I will be using 1inch for a MU during the playtest.

A heavy bombardment group of B-29 Super Fortress bombers are en route to their target deep in North Korea.  They are being escorted by the USAF's F-84 Thunderjets.  On November 1st, 1950  a group of F-51 Mustangs encountered an unknown aircraft crossing the Yalu River from China.  These new Jets have been a menace to UN Forces ever since.  The question is, will they try to intercept this group of Bombers, and if so will the Thunderjets be up to the task of driving them off?

For ease, I made all pilots Experienced pilots as opposed to Aces and Rookies.

Mission:
The USAF must escort the B-29's across the board and to their targets.  The Mig-15s are attempting to destroy the bombers.

Set-up:
The board will be 48 x 48 MU (or 4 by 4 feet).  Prior to Deployment, both sides roll a "Detection" dice looking for a Detection Target Number of the various aircraft.  The UN used radar and pilot eyeballs for detection, while the Communists used ground control, ground spotters, and some radar as well.  B-29's are relatively easy to spot, while fighter craft are  harder.

The Communist spotters have done their job well, they roll a 6 so all USAF aircraft will be on the board.  The USAF have not done as well, rolling a 2.  The Mig-15s are not detected, but the USAF knows they are lurking around.  They could appear at any moment.

The B-29s are placed touching their board edge.  The Thunderjets have two on each side.  They are all at altitude band 3, High altitude.

Turn 1:
The force with the most aircraft always gets Initiative.  Each turn is divided into three stages, Rookie, Experienced, Ace.  During the Phase players alternate activating aircraft.  Rookies can only activate in the Rookie phase, Experienced in the Rookie and Experienced phase, and Aces in all three phases.

The USAF starts by moving a B-29.  The Migs choose to not swoop in, and the USAF player continues moving the Bombers.  This continues and no Migs show up as the USAF moves forward through the Rookie phase.

The same happens in the Experienced Phase, as no Migs arrive.  They are probably looking for some room to maneuver away from the board edge.

Turn 2:
Turn 2 pretty much continues as Turn 1 did, with no Communist elements wishing to attack this turn in the Rookie or Experienced phase.

Turn 3:
Since there are no losses, the USAF still has the initiative.

Rookie:
The lead B-29 grinds forward, when a Mig-15 swoops down from a higher altitude and falls in on the tail.  An aircraft appearing from being undetected can pretty much go wherever they want, including into a Tailing position.  There is a roll to determine where the final position is, but it provides a big advantage to be undetected.

The Mig-15 ends up out of short range, but fires way anyway at the lead B-29.  As an experienced pilot he gets 2 dice, looking for a target number in the plane's profile.  In this case it is 3+.  He hits with both.  Since the shot is long range, the B-29 gets an extra "maneuver dice" to avoid the hits.  B-29s are not that maneuverable, but an experienced pilot gives them 2 dice +1 for the long range.  He does not save any of the shots, the lead B-29 is sent smoking into the ground below.

The next B-29 moves, and the next Mig tries to swoop in.  However, he misjudges the angle and has no shots.  The same happens with the next B-29 and Mig.  No shots are available.

Thunderjet 1 starts to try to turn back, when Mig #4 swoops in behind Bomber #2 and opens fire.  1 hit, but the B-29 absorbs the shells and keeps going with a Maneuver save.

Thunderjets 3 and 4 start to turn into the fight, while #2 keeps going forward to defend the bombers. 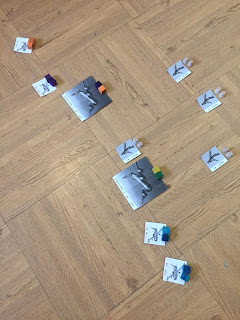 Experienced:
B-29 #2 sees a Mig next to him, and his gunners open fire.  B-29's have a 360 fire arc at short range, so Mig #2 who badly misjudged his dive is getting peppered.  His wing is shot off and his plane spirals out of control into the ground.  Scratch 1 Mig!

B-29 #3 fires on Mig #3 behind him, but fails to take him out as the pilot Jinks away.  He then drops a level but continues going straight.   Mig #3 follows him down, but doesn't have much of a shot.  Thunderjet #4 also goes to altitude 2.

Mig #4 makes 20 degree turn and bears down on Thunderjet#3, and opens fire,  The USAF planes manages to avoid the incoming fire.  Mig #4 is now out of ammo after the long bursts at the American jet.  He will want to disengage.

Thunderjets #3 and #2 turn into the furball, while Thunderjet #1straigthens out. 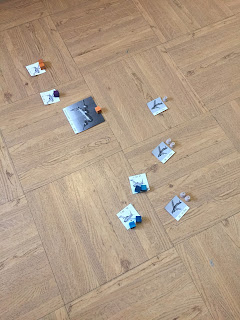 Rookie:
Thunderjet #3 drops to try and get a bead on Mig #3, but doesn't have the angle.  Meanwhile, Mig #1 attacks Thunderjet #2 up close.  This uses the last of the Mig's ammo, and the USAF fighter dodges the incoming shots.

Thunderjet #2 drops altitude to cover the Bomber.  Mig #4 takes a sharp turn away and moves to disengage.

The B-29 fires, but Mig #3 is just out of range.  The Mig then follows the big planes and lines up a kill shot to its rear.  The Mig has a poor attack roll for Tailing, but it is enough as the B-29 fails to evade.  The last bomber goes down in flames.....

Thunderjet #1 and #4 are out of position, but #4 climbs back to Altitude 3 to bleed some speed. 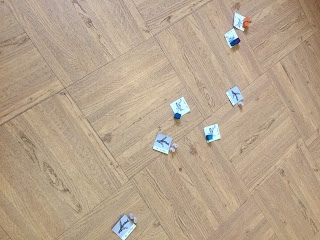 Thunderjet #3 gets a bead on Mig #3 and opens fire.  The torrent of .50 Cal rounds is enough and the Mig is shot down!  Revenge!  ThunderJet #2 had also been right there to support the attack.

Mig #1 continues to disengage and the Remaining Thunderjets are not in a position to attack.  He will easily escape. 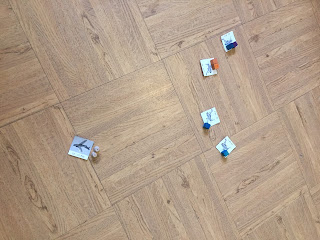 Conclusion:
The Communists win by downing all the Bombers.  However, it was not without cost as 2 valuable Migs were lost in the battle.  Not a terrible exchange.

Let's breakdown the game so far....

Good
- Quick play- about 1 hour
- Planes are easy to manage with little or no record keeping
- Planes performed as intended, but did not get to use the Migs improved climb ability
- Relatively small play area
- Breakdown of the Turn worked with equally experienced pilots
- Historically accurate outcome for the timeframe I placed this mission

Bad
- Detection needs further work.  It worked much like a Korean War dogfight, but the USAF had little they could do to respond
- Planes ran out of ammo after 1 pass

To Be Worked On
- Rules about no collisions in the sky, even if the models bases overlap
- Deployment needs some work to add depth
- Terrain such as cloud cover is needed to add replayability
- Define when you shoot vs. when you move better in the rules

Overall, things went as expected.  That doesn't mean I am satisfied with the results.  There is still work to be done to add more tactical skill and replayability to the game.  Current detection is historically accurate, but not very rewarding/fun to the non-detecting player.  This needs a lot more work and thought.

More to come as this game develops!

Posted by Blood and Spectacles Publishing at 1:42 AM