On the Painting Desk- Greeks, Gangsters, and Lizard Men? 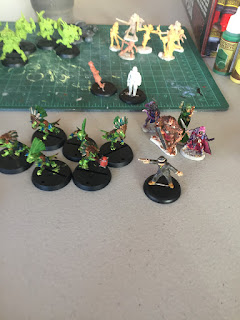 2020 has been moving quick and I have not been able to play nearly as many games as I would have liked so far.  It is cold in my gaming area!  Therefore, I have been doing a lot more painting.  You may have noticed that I have started a tracker for the number of models I have painted, and the number of games I have played.  The difference is pretty telling.

This year so far, I have manage to paint abut 30 or so models.  That is a pretty good rate for me.  Last year, I think I painted more models than any other year!  I think it was driven by two main projects.  The first was completing all of my Blood Bowl teams up to that point.  The second was managing to finish my Macedonians Army. 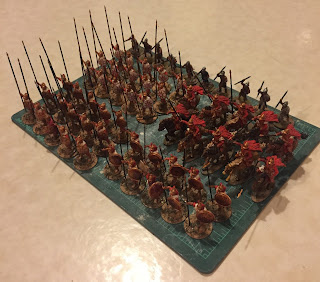 This year, the big project is painting two 6mm Successor armies, but I have not even bothered to start that process yet.  To be honest, the 6mm scares me.  I have a feeling that once I start it will go all too quickly, but I am still a bit intimidated by it.  It is the basing more than the painting that is scaring me. 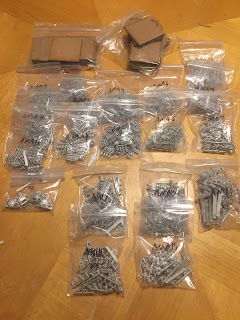 So, like the good procrastinator that I am I have decided to try to polish off some other projects:

So, I started off strong on my Corinthian army by painting up some Greek Peltasts.  I was a bit nervous about getting the transfers right on their shields due to the strange shape.  However, they seemed to turn out just fine!  You decide.  They still need basing, but I will do all the bases at once. 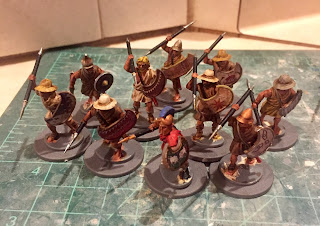 All my Greeks are Victrix.  They are great value.  After these guys, I still have enough models for probably 1 more unit of slingers and two hoplite units.  That means each box could provide 4 to 6 ten man units.  Amazing.

Next, I prepared a unit of 10 Hoplites for each army.  I managed to get one nice day with good weather and high temps and I took it to get these guys primed.  It has been pretty awful weather ever since. 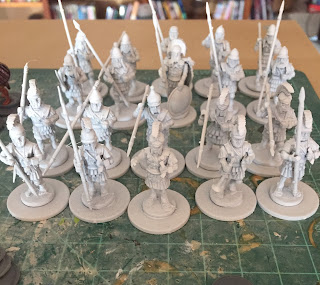 Then, for the Super Bowl, I pivoted my attention to the Blood Bowl Lizard Men.  I managed to pick these guys up on a work trip, and quickly turned them around in under a month.  Not too shabby. 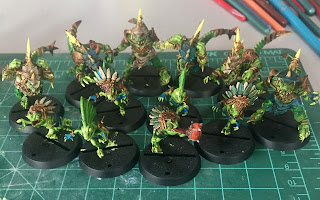 Then, as I was waiting for stuff to dry, I started painting some one-off figures.  It was a nice change of pace.  One off figures paint up so much faster than units, but are also less efficient on the paint.  Many of these models were Reaper Bones.  I was less than impressed with the material and it was not very friendly for painting.  However, the Bones Black I had were far superior, and well worth the extra dollar.  Metal Reaper are still the best for painting, but Bones pricing is soooooo much more affordable.  The Bones Black is a good compromise.

Of course, the gangsters are Copplestone Casting.  They are a joy to paint.  Quick, simple, yet flavorful.  I have been eyeing the purchase of some terrain to go with them and to populate the pictures for Turf War, but I need to save up some cash first. 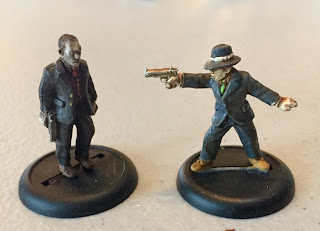 So, that's what I have been working on instead of playing games.  Despite that, I have three Wargames projects in the pipeline.  These have also been taking up my time.  I will tease them by saying the following:

1. Those Fantasy models may get a chance to hit the table for more than just D&D.  Keep an eye on my Wargames Vault page
2. Gangsters may have another new game to be played in soon.... with my Tripods?  Keep an eye on the Work In Progress section of the Blog.
3. I am working on my 2nd draft of the Wars of the Roman Republic Rules for Osprey Games

That is a snapshot of my Hobby January results.  Not too shabby for the 1st month of the year!

Posted by Blood and Spectacles Publishing at 2:46 AM