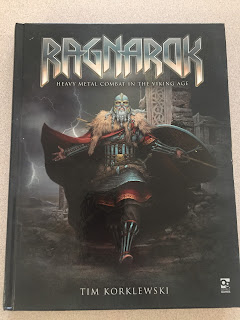 Ragnarok.  I love the description of this game.  It is the most metal wargame description I can think of.  Here it is for those that have not read it…..

The end of the Aesir has come, but not as the prophecies foretold. The dread dragon Niddhoggr has devoured the roots of the World Ash, Yggdrasil, and the great tree has toppled onto its side, crashing the realms of mortal and supernatural together. With the gods dead and the fires of ruin consuming the world, your war clan of Viking warriors know what they must do to survive the destruction of the Nine Realms and restore order: they must become the new gods!

The subtitle for this book is….

Wow!  How can a game possible live up to this level of hype?  I don’t know.  Should we dive in and find out? 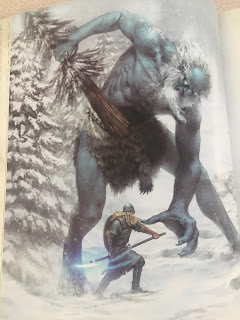 Things I Like About This Game
This game has a great hook that leads to some interesting, potential in game play.  Essentially, the gods have been shattered and their power has been scattered across the planet.  Your warriors can harness this essence by doing amazing deeds and then release it with spell like effects.  This is a great premise!

Plus, it can be used to increase the tactical play of the game.  First, it involves resource management as you “earn” Godspark it is a pool that you can divide up.  You can use it anytime to trigger a spell like effect, and it can be done by any warrior in your warband.  This means you have to think what you want to use and when you want to use it for maximum effect.  The effects are movement, combat, and psychology related depending on the power.  Starting warbands get three powers that you can randomly roll or pick?  Random roll all the way!   Now, I have some quibbles with tracking the Godspark pool and how you generate it, but for the most part this is a cool mechanic and hook for the game.

There is a good list of Powers in the book.  In addition, you can spend extra points to boost the effects of a Power to some amazing levels.  Again, decisions need to be made.  Hoard the power for a big Ka-pow or dribble it out to boost a few key actions here and there?

The core of the game is a 2d6 roll, using opposed stat lines to determine a target numbers.  The bigger the difference in the stat, the harder the target number.  I love that the game uses 2d6, with even stats being a 7.  This creates a nice bell shape dice rolling mechanics.  The author calls this the Morpheus System.  Also, using stat comparison means that Stats matter a lot and the game can cover a lot of ground with one simple mechanic.  Double plus good!

There is a large bestiary of Norse critters that you can and will face in various scenarios.  If your warband defeats these critters, they can become available for hire by your warband.  This is a cool way to add some fantasy elements to the game and make Warbands unique.  Starting warbands only have a few human types to add, so this is a cool way to add a lot of variety.  Like I said, the bestiary in this book is pretty impressive. 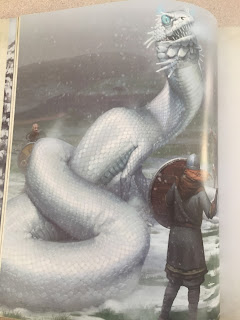 Things I Do Not Like
Action points….. grrrr.  I am not a fan.  Just more tracking when you all ready get to track Godspark.   I have an irrational hatred of Action Points.  You can move twice, move and attack, attack then move, move and use a power, attack twice, etc.  For some reason, I always feel like this is micromanagement and tracking that slows down the flow of a game.  I prefer you get to do one thing so choose what is most important and do it all ready!

The game has a variety of special rules to make terrain more interesting.  In theory, this is a great idea.  In practice, it just leads to more looking at the rulebook, tracking, and figuring out what all the “key words” means.  This game reminds me a bit of A Fistful of Kung Fu.  This is a cool idea that adds to the “Metal” of the game, but in practice it seems fiddly.  I prefer less key words in my games because I am not smart enough to follow what it all means in the moment.

Related to that, there seems to be a lot of small bonuses and abilities that could add up to something big but just feels a bit like needless complexity.  It feels a bit fiddly as Stats have names that were not Intuitive to me, a lot of keywords, and keywords with numbers.  There are also a lot of fiddly rules. Things like, throwing a torch as a weapon, burning down a forest t change the scenery type, stacking abilities, etc.  In order for an ability to stack it can’t be that impressive by itself.  Therefore, cool abilities have to be watered down a bit so they can stack.  This helps layer on more choice for the player, but I am not sure it really adds THAT much to the experience.

Finally, I am not a fan of how you gather Godspark.  It is not an objective or scenario related item.  Instead, anytime you make a stat test and beat it by three you gain a Godspark based on how much you succeed.  Therefore, if you need a 7 but roll a 2d6 and get a 11, you earn 2 Godspark for the whole band to draw from.  Then, various powers are constantly using Godspark, so you are moving the needle up and down on this reserve a lot in game.  Better use a d20.  J 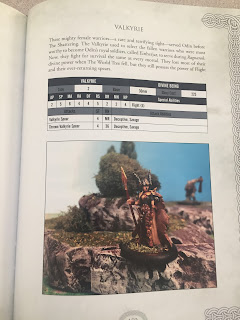 Meh and Other Uncertainties
The game uses Alternate Activation with a HQ start Phase and an End Phase where some special powers and compulsory moves can occur.  Pretty standard for a modern skirmish game.

Starting Warbands are pretty basic with a Jarl, and a few human choices.  Pretty typical weapon and armor selection as well.  In campaign mode, there is a pretty good selection of magical artifacts, usable items, and other bits a pieces to make each warrior a bit more unique.  The treasures tables are pretty nice.

The campaign is pretty standard for this type of game, and follows the famous skirmish game pattern.  The game has a bit more lethality to it than Last Days: Zombie Apocalypse but models can not get as unique as they can in Outremer: Faith and Blood.  Of course, there is also an underdog mechanic to help get late comers up to speed.

There are six basic scenarios but also a list of secondary objectives.  This helps create a more re-playable game.  Nothing to earth shattering here…. See what I did there!  It is a joke about the game setting!  I am sooooo funny! 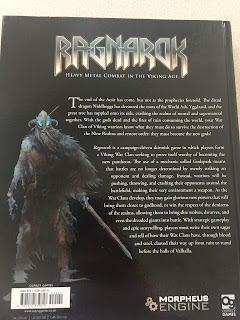 Final Thoughts
Many of the recent skirmish games I have reviewed have had a big issue.  They have lacked tactical play.  They were mostly an exercise in pointing your little guys at the enemy and choosing the best target to attack and not much else.  Chrome around the edges was designed to hide the fact, but tactical gameplay was lacking and without it the re-playability of the game was diminished.  I think the addition of the Godspark and how it is harnessed, used, and what it can do helps overcome some of this.  In addition, using Stat comparison for TN then rolling 2d6 seems like a very nice core mechanic.  I think the biggest drawbacks are the somewhat boring activation system, lack of engaging psychology/morale rules, and some fiddly-ness around the modifiers and powers.

There is a lot of great chrome in this game such as the powers themselves, magical weapons, adding monsters to your warband, and the campaign elements that would make this game replayable, however more scenarios with more fantastical elements thrown in would be awesome.  I think the various Frostgrave or Dragon Rampant scenarios would work really well with this game, so you can easily bulk the scenario list quickly.

I bought this game on a whim, but I am happy with the purchase.  I can see myself playing this game at some point in the future.