Today we will be playing a game of Rampant Stars set in the Operation: Hemlock setting I devised for the Warhammer 40K universe, but not using 40K rules. 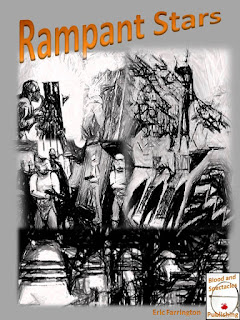 The Ork migrations to the Deff Islands had caused them to naturally overflow from the Green Zone. As a result, Ork mobs began to make land fall on Baron's Rest. At first, in a series of skirmishes, the PDF forces near Camp Hope(Less) were pushed back, and the refugees were evacuated deeper into Imperial territory. In their place, PDF Troopers from Taskforce: Sword moved into the camp.

With their initial advances successful, the Orks gleefully pushed forward looking for loot and slaves. Forward elements involved fast moving truk and buggy mounted boyz. They raced tot eh entrances of Camp Hope (Less) in an attempt to break through the human defenses and blast past them. However, PDF mobile elements were ready to meet them.

Mission:
Rampant Stars uses a a random mission generation system rolling a 2d6. Today we got, Forced Entry as the Orks try to blast their way into a side entrance into Camp Hope(Less).

However, missions also have complications and locations. These can also be randomly chosen or picked. Today we picked: Heat and Dessert/Ice World to match the setting of Operation: Hemlock.

This will impact the play of the game Heat reduces the number of times you can Move/Double Time in a row. 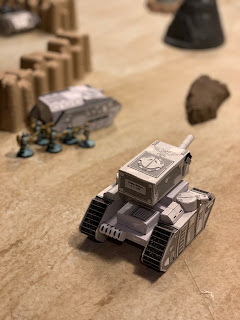 The PDF placed across their side of the board the Helga mounted Squad of 10, then the Flat Bed Helga with 5 was in the gates. Next was the Helga APC command squad. The final unit was the Ragnarok battle tank to anchor the right flank behind the power station. The Orks had the Kartz on their left, then the Stomperz, then the Speederz, Trukkerz, and Bikerz. 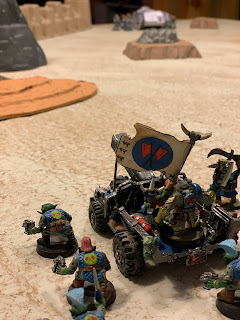 Turn 1:
The Orks try to move out across the front with Move orders. However, the Speederz hesitate and fail to move up. The PDF Ragnarok and Command squad move up to engage the enemy, while the rest stay put due to orders.

Turn 2:
The Stomperz push ahead on foot, looking to storm the gates. The Kartz and shaken behind difficult terrain, they maybe having some mechanical issues. The Trukkerz slow their advance and take ineffective potshots at the Ragnarok across a sand dune. The Bikerz also slow their approach to fire on the tank, causing some slight damage.

The Ragnarok fires on the Bikerz, and takes out two with a flurry of battle cannon and heavy bolter fire. The Helga Squad and Flat Bed squad are both shaken by the sudden intensity of the fighting. Meanwhile, the Command squad digs into cover behind a rock outcropping. 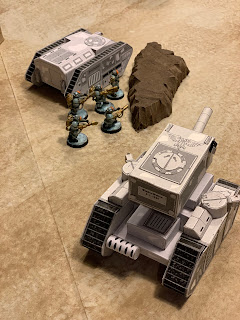 Turn 3:
The Kartz again stay shakened. However, the Speederz rally. The Bikerz settle in and open fire on the concealed tank and fail to cause more damage. The Trukkerz change their shooting to the command squad and tag one of the troopers. The Stomperz keep moving forward, but slow their pace enough to kill a Helga trooper.

The Ragnarok returns fire on the Truckerz, but fails to find a mark through the tight cover. The Helga troopers move up and fire on the Stomperz, and reduce them two troopers. 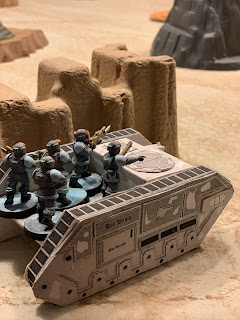 Turn 4:
The Speederz finally get moving and try to move an shoot, but are out of range of the Ragnarok. The Trukkerz fire on the Command Squad and whittle them down further. The Biker inch forward firing at the tank and fail to cause more damage. The Stomperz move up between a rock formation and the center mountain of slag. 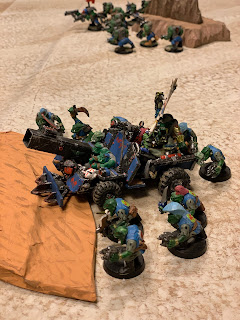 The PDF responds with the Helga troopers firing on the Stomperz with minimal effect. The Flat Bed squad moves to the entrance of the camp and blocks it. Meanwhile the Command Squad is shaken. The Ragnarok fires at the closing Bikerz and reduces them to two bikerz left. 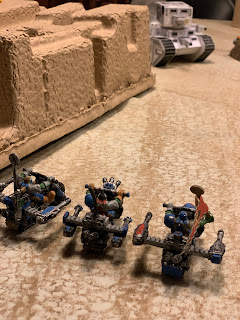 Turn 5:
The Kartz have been immobile and shaken the entire battle, and stay that way. The Truckerz and the Speederz try to move and shoot, but the terrain foils their efforts. The few remaining bikerz again target the hull down tank for little effect.

The PDF decide to act decisively this turn. The Command Squad rallies. The Ragnarok fires on the Bikerz and finally wipes them out with a blast form it Battle Cannon. The Helga squad charges the Stomperz, with their APC leading the way and laying down cover fire. The Orks fallback from the attack, but both sides take casualties in the close range fire fight. 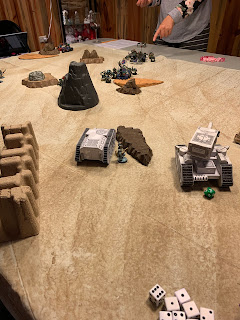 Turn 6:
The Trukkerz see the Helga squad as a new threat and gun them down with help from their truks' weapons. The Stomperz move around towards the gates at full speed. The Speederz again are shaken as are the Kartz. 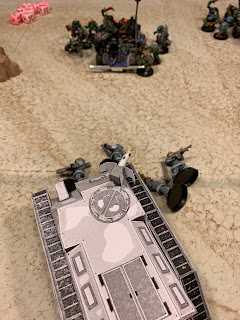 The Ragnarok moves in on the center of the board and fires the Trukkerz with little effect tanks to terrain. The Command Squad moves up into cover again. The Flat Bed squad drives into the Stomperz firing at will. This routs the Ork Stomperz. 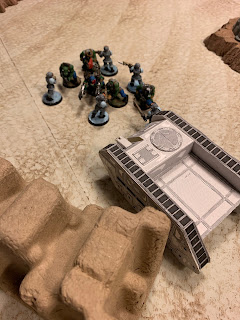 Turn 7:
The Speederz rally, but the Kartz fail to rally. The Trukkerz fail to take out the PDF Command Squad.

The Flat Bed Squad moves back to cover the gates. The Ragnarok and Command Squad fire and whittle away the Trukkerz. 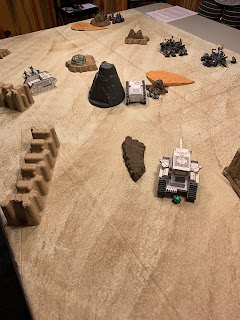 Conclusion:
The Orks decide that they can not get to the gates and fall back. The PDF let up a cheer as the greenskins fall back. Camp Hope (Less) has been secured and the retaking of Baron's Rest has begun!

Cololnel Brusilov of Taskforce Sword let out a sigh of relief at the news His troops had managed to hold the line. Now, it was up to his colleagues in the other taskforces to keep the Orks from crossing the narrow straits from the Green Zone. His command bunker at Grig's Landing was buzzing with activity, but he flagged down a subordinate to create the communique for the other Taskforces.

The next key to the campaign on Baron's Rest would be to start to push the Orks back. Most of the air assets were assigned to Commodore Miles of Battlegroup: Chalice but Brusilov had managed to get some strike aircraft assigned to him. Now, he could use them to harass the Orks as they fled back towards Look Out Pointe. In addition, Vice-admiral Travers of Thorn would need to keep new Orks from arriving by sea. Operation: Hemlock still had plenty of fighting left in it.

Another quick and decisive game of Rampant Stars. I purposely changed up both armies for this battle to play around with different forces. I wanted the Orks to be faster, and I thought they had a good chance when the Forced Entry mission got rolled up. However, my opponent played a bit conservatively as she was very concerned about the firepower of the Ragnarok. As a result, they failed to consistently push towards the objective. They were also hampered by some poor Command rolls, with the Kartz completely out of the game.

My mounted PDF troopers did their job today and I had much better luck with the dice. The Ork Stomperz did not have any assault upgrades and my professional soldiers managed to push them back in two key close assaults. Overall, I felt confident after Turn 5 that I could hold. Overall, a quick game that took about 90 minutes to set-up, rejigger army lists, deploy, play, and pack away. Good fun.

You can get a copy of Rampant Stars at my Wargame VaultPage.

Posted by Blood and Spectacles Publishing at 3:08 AM