As part of Operation: Hemlock the Imperial authorities launched a three pronged offensive to eliminate the ork threat on Ammoriss once and for all. As part of Taskforce: Chalice the Ammoriss Air PDF and Imperial Navy was tasked with gaining and maintaining air superiority for the campaign in and around the Deff Islands. Commodore Miles of the Imperial Navy was placed in overall command of the operation.

Prior to Operation: Hemlock; Warboss Skarbash had operated a rather large fleet of submarines for piracy and smuggling. This fleet had been a thorn in the side of the Ammoriss Naval PDF for decades. Now, with the defeat of the Warlord Gark's forces in the Alset Mountains the refugees were fleeing to Da' Deff Islands anyway they could. The easiest way to slip past the blockade was to sneak by it in a submarine.

Therefore, Commodore Miles in support of the Naval PDF had been using his PDF forces to patrol the approaches near Da Green Zone. These patrols were often intercepted by Ork fightas looking for a scrap whether an Ork sub was in the area or not. These patrols were difficult and challenging operations that had high casualty rates for the Ammoriss Air PDF and led to increased animosity with command especially after the failed attempts to Recon the area earlier.

However, General Kurtz cited these patrols as vital to the success of the Operation as, “Every Ork killed at sea was one less Ork to fight on land”.

Mission:
Today's mission will be the Ocean Recon scenario. The PDF Sky Hammers are equipped with special bomb loads for destroying submarines instead of their normal bomb loads. This mission and the PDF forces are from the Airspace Rules Compilation.

Set-up:
Per the scenario, the Ork player rolls 2d6 and places 6 tokens on the board to represent the possible location of the Ork sub. Once revealed, I will use an Aquanautica Imperialis model to represent the target. 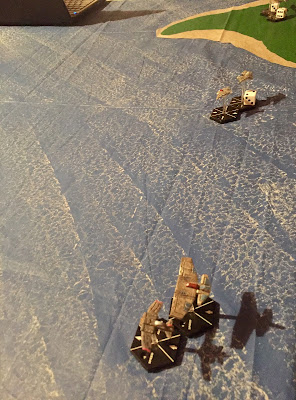 The PDF craft are coming in on a short board edge with the Sky Hammers and a Strom ins package at each enbd coming in low and slow. The 2 Sentry are high and in the middle.

The Orks come in as a big mob at medium speed and the center of the board. However, one grot Buzzer is out wide on each edge and relatively low. 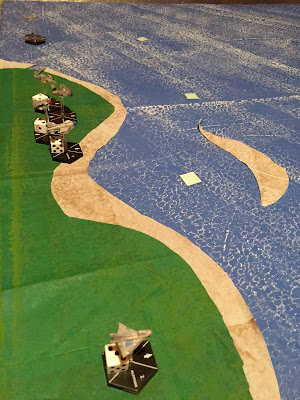 Move:
The PDF is confident in their plane and everyone just flies straight forward.

The Orks also press forward to try to cover their potential sub locations. They spread out to cover the board, while Fighta 1 goes up to challenge the Sentries..

Shooting:
None, no one has the range yet.

Move:
The two forces come head-to-head and neither side seems to shirk from getting into the thick of a furball. The higher altitude Sentry's try to dive in on the approaching Orks on the East side, but poor power dives leave them in awkward positions. Meanwhile, the Storms and Sky Hammers look ready to trade shots with the approaching Ork craft.

Shooting:
In an act of self-preservation, Buzza 3 opens fire on the PDF Storm 1, and a spray of wild shots manage to hit something vital and sends the plane spiraling into the sea. The pilot fails to eject in time. 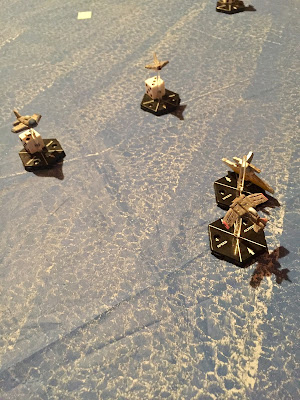 Sentry 2 fires on Buzza 1, but fails to get a telling hit with his weapons. In return, Buzza 1 opens fire on Storm 2, and a spray of bullets takes out my second PDF craft. This time, the pilot ejects safely.

Sky hammer 2 tries to spray down Buzza 1 but misses.

Fighta 2 eagerly blasts away at Sentry 2 despite a bad angle. There is enough lead in the sky to bring down the light interceptor. This time a big shoota bolt catches the pilot in the head and the plane slowly glides down into the ocean below. 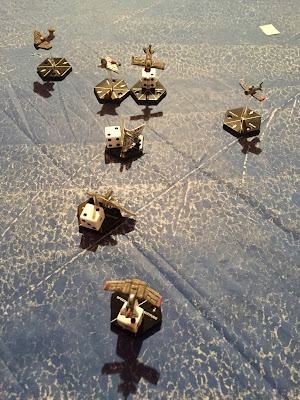 Wow, three planes down in 1 turn, and it is disengagement turn all ready. Ouch.

Move:
The Sky Hammers push to their initial target points, and discover that there are no enemy subs at those co-ordinates. Meanwhile, Ork aircraft scramble around to turn back into the furball. 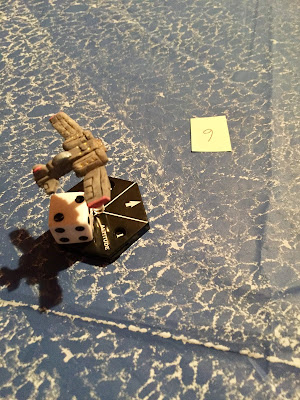 Shooting:
Buzza 1 takes some potshots on Sky hammer 2, but only serves to convince the pilot that it is time to bug-out.

Sentry 1 takes a long range Sky Strike missile shot at Fighta 1, and it burst near enough to cause the Ork craft to blow smoke, but not down it.

With that, the two sides break-off and head back to their own air bases to re-arm, refuel, and count up the butcher's bill.

Conclusion:
That was a quick dogfight. To misquote Admiral Beatty at Jutland; something seems to be wrong with our bloody aircraft today! I forgot how fragile PDF planes are and how much firepower Ork fightas can put out up close. I would have done better trying to avoid a scrap and sneak past them. However, I am unsure if that would have worked much better. That was a turkey shoot as PDF planes dropped with almost every time my Skumgrod picked up the dice.

Commodore Miles reviewed the days action log. Too many planes were lost for little gain. Morale in his PDF air crews was all ready low, and further pointless losses would not help them perform better. The Orks seemed to be replacing aircraft faster than his boys could shoot them down. In addition, he could not report to his peers that the channel between the Green Zone and Baron's rest was secure. It was only a matter of time before Vice-Admiral Travers and his Naval forces demanded a crack at securing the area.

Meanwhile, The PDF scouts reported additional Ork reinforcements landing by submarine and Mob boat on the shores of Baron's Rest. Despite ground successes there the PDF couold not hold is more Ork reinforcements kept surge into the area.

Posted by Blood and Spectacles Publishing at 3:03 AM