At my local grocery store, they have a small section to sell toys to the little sprogs.  It is 4 lonely feet mixed in with the sugary cereals.  A perfect place to ambush an unsuspecting parent!  In this forsaken section of toys, they had a bag of plastic cowboys and Indians.  It had been a long time since I had seen a bag of these toys.  I managed to resist buying them for several visits, but eventually my willpower cracked and in a moment of weakness I bought them.

As many of my long time readers will know, I love using toys for my wargames.  Of course, my first though was to use them for some Wild West themed game like Legends of the Old West, Dead Man's Hand, Fistful of Lead, or Dracula's America.  I had been toying with the idea of a Weird Wild West game myself for a long time.  I never actually got it down on paper, and eventually that game morphed into Turf War instead.  However, here I was with a nice set of multi-colored cowboys and Indians with no game to call home.

When I showed my family what madness I had wrought, my daughter was quick to solve the problem.  She asked if I was going to make another dexterity game with them!  Genius!

I had first been introduced to the ideas and mechanics with the Z-man game Flick'em UP!  At first I had been skeptical.  However, after playing several games with players of all skill level and ages I was won over by the concept.  I had successfully used dexterity combat mechanics to make games before.  You can see the successful results in Total CARnage and Green Army Men: Plastic Men, Steel Resolve .  At that point, I decided that this rule set was going to join the Plastic Men, Steel Resolve family of games. 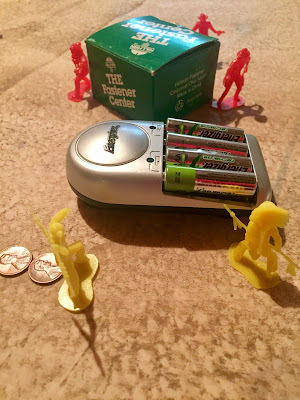 So, the big question was how to make it a unique experience.  It was clear it would still use the WYSIWYG (What You See Is What You Get) mechanics of my other dexterity games.  I still wanted the flick and flip mechanics too.  Finally, I also had dice "coin shifting" for different weapons lethality.  These were all features of Green Army Men: Plastic Men, Steel Resolve as well.

Most of the flavor came from a few sources:

1. Unique weaponry- The Wild West was well known for a few key weapon systems; the revolver and the lever action rifle.  Of course, those were not the only weapons.  The question was how to make them unique.  This was done by adding special rules not present in Green Army Men: Plastic Men, Steel Resolve 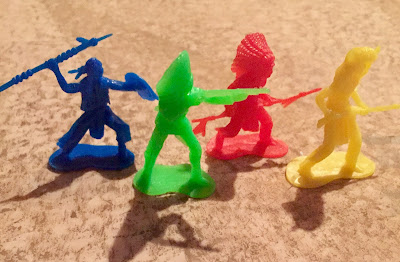 3. Horses and Wagons- Riding horses and wagons was a key part of the Wild West.  Without horses, you loose the flavor of the period.  Therefore, there are rules for mounted models too!

With those key elements identified, it was time to put the new rules together.  Thankfully, I was able to build off of an existing framework.  However, a revolver in the this Wild West game ended up working very differently than a pistol in Green Army Men: Plastic Men, Steel Resolve .  In addition, this new game had twice as many scenarios to play than its predecessors.  High Noon: Plastic Men, Steel Resolve was born. 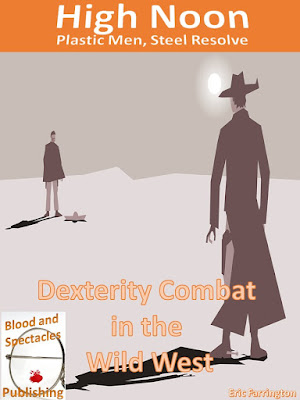 You can find this game (along with my other works) at my Wargames Vault page here: https://www.wargamevault.com/browse/pub/11064/Blood-and-Spectacles-Publishing

Here is a quick start of a Battle Report to get a feel for game play:

Black and Blue Bart and his gang of outlaws were trying to scout out a watering hole.  They came across a band of Native Americans.  The Indian war party recognized the outlaw, and decided to try and hunt him and his posse of outlaws down for the bounty.

Forces were selected by dividing the toys up by color.  Then reaching into the bag and pulling out random figures and using what they were armed with.  Simple.

Set-up
The board was set-up on a 4x3 table with a desert mat.  We then placed four pieces of random stuff I had within arms reach.  Terrain is 1 for 1 in this game so What You See Is What You Get (WYSIWYG).  If you have Wild West themed terrain that is great, but it is not needed.

Mission
We looked at the three pages of scenarios and we decided to do a basic Rootin' Tootin' shoot-out.

Turn 1
The coin flip let's the Cowboys go first.  Bart moves up with his two pistols and shoots ineffectively.  He is countered by the knife wielding indian going up the center as a distraction.  An outlaw rifleman runs forward and fires at a spear men, but misses. 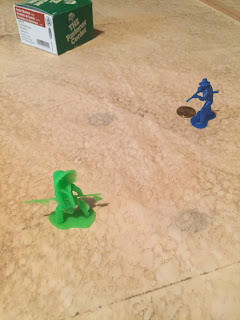 A second spear men moves up and a well aimed throw puts the Outlaw out of the game.  First blood to the War Party. 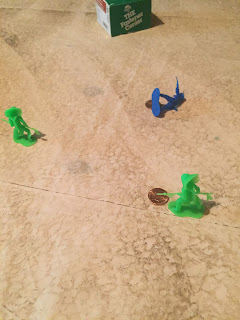 However, the second rifle armed Outlaw stands still and fires across the board.  Since he stood still, he can take two shots with a lever action rifle.  His second shot finds its mark despite the distance!  The Indian spear man goes down and is out of the game. 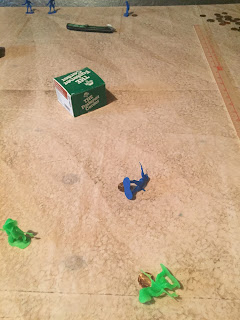 The Long rifle and Shotgun Native Americans move up the flank, while a pistol armed outlaw tries to cover the center of the board.

That ends Turn 1 with both sides using alternating activation to move and shoot, shoot and move, or to simply shoot.  Not moving let's some weapons fire more often. 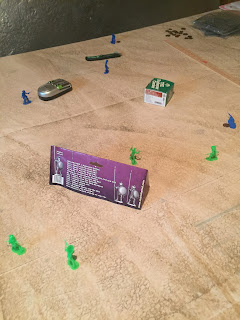 So, that should give you a general feel for the game play.  Now you can decide if it is a game for you.  You can find this game (along with my other works) at my Wargames Vault page here:

Posted by Blood and Spectacles Publishing at 3:29 AM