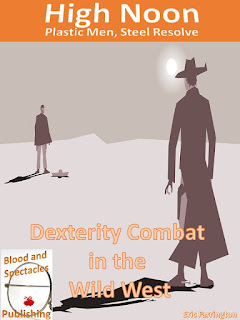 With the launch of High Noon it seemed appropriate to share a large game we played loosely based on the battle of Fort Ridgely in the Dakota War of 1862. I have long wanted to build and play a wargame campaign for this conflict, and have even loosely based my All Quiet on the MartianFront games on the campaign. However, I have not really had a chance to put it high enough on my Hobby to do list to actually get it on the table. I have a few sketched out drafts for core rules, and a basic idea of the campaign flow, but that is about it. If I can't play a full fledged campaign, I can at least play a game loosely based on the events.

In the history, after a flare up of hostilities between the Dakota and white settlers in Minnesota; a local war broke out. There were the typical massacres, some battles between local militia and Indian tribes, that eventually culminated in the Dakota attacking Fort Ridgely. Fort Ridgely was a wall-less fort similar to many forts on the prairie frontier and during the Indian wars in America. It was composed of only a few buildings, and had a relatively small garrison. The Dakota were attempting to drive the white settlers out, and by attacking the fort they hoped to force better terms from the Europeans.

High Noon is part of my series on Dexterity Combat along with Green Army Men: Plastic Men, Steel Resolve and Total CARnage. Therefore, there are no dice rolls, rulers, templates, etc. Everything is resolved as WYSIWYG, coin flips, coin flicks, or hand based templates. This is a very family and non-wargamer friendly game. 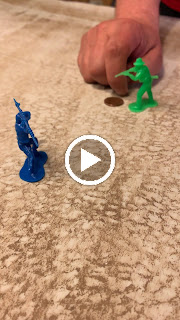 Forces
Forces were selected by taking every Indian figure I had and giving it to the Dakota. I then took all the Cowboys with Rifles standing up that I had and put them on the opposite side. I added a couple of pistol packing dudes as Officers. 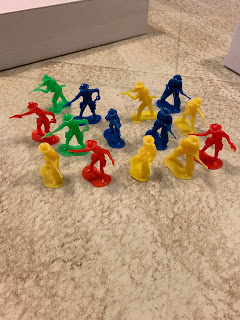 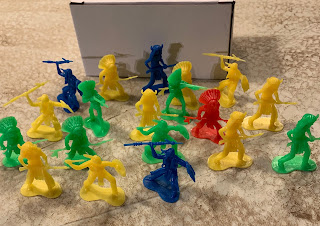 The actual defense of Fort Ridgely feature the use of some artillery pieces, but I don't have any of those so I skipped them for this.

Set Up
The table is a 6 x4 table covered with a brown desert mat. I placed four boxes in a rough square in the center which corresponds roughly with the lay-out of the fort. I then placed some rocky outcroppings near the edges for some cover. Fort Ridgely is actually in a clearing of woods and has a small gully beside it and tall grass in the “dead zones”. Not too much like what I set-up here, but that's why it is “based” on that battle and not that battle. 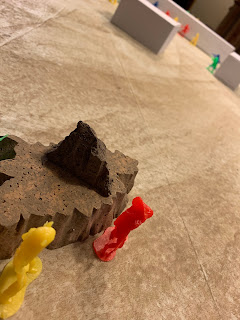 The Dakota were scattered around the edges of the board in groups of 3-5 figures. Each group had at least 1 rifleman for cover, and a spearmen or two. The defenders were mostly concerned about the template firing shotgunners, but they started in cover to help protect them from long range fire. 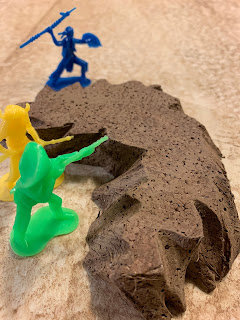 The Defenders were placed along the insides of the boxes, facing the center of the board. This was to represent them leaving the shelter of the buildings at the surprise Dakota attack. 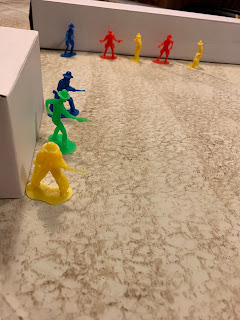 The Game
I did not take detailed notes during game play on a figure by figure basis. Therefore, the below is a high level overview of the battle. The defenders won the Coin Flip to activate a figure first. All actions are alternate activations.

The Defenders got to go first, and opted to try and stay within the fort, and move to the edges and try to use long range shooting on their foes. The Dakota pressed towards the edges, moving and shooting whenever possible. The Dakota rifleman tried to clear the way with a barrage of fire, before the Dakota spearmen moved up to mop up exposed defenders. The initial Dakota sally towards the North side of the building was repulsed by the defenders with firepower. The Dakota attacking from the open took particularly heavy casualties on the North East corner.

Despite the success in the North, the Southwest corner was left vulnerable, and the Dakota moved in. Their numbers advantage allowed them to move forward with relatively light resistance. Only a pair of officers tried to hold them back with pistol fire. 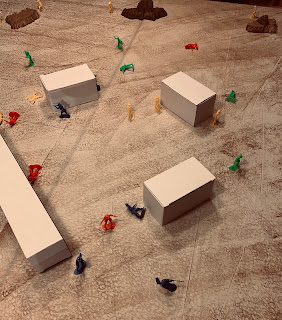 The Dakota advantage in numbers became clear once the spearmen were able to get in cover behind the forts buildings. The close range firefight that broke out forced the defenders to move to get firing positions, which limited their firepower.

In addition, one of the Indian shotgunners was able to move up and blast the officers defending the Southwestern edge of the fort. This left a large breach for the defenders to try to plug.


Ultimately, once the Dakota managed to get to the perimeter of the fort, their numbers were able to turn the tide and the last of the defenders were killed by spears. It was a costly victory as the Dakota were reduced to only a handful of warriors.

Conclusion
That did not go anything like the battle of Fort Ridgely. However, it was a close fought and exciting game with some cinematic moments and amazing flicks, both good and bad. One defender as killed by a misfire, as I flicked it so poorly that he took himself out! One of the Shotgun Dakota was killed by his own allies due to a bad flick. An Officer with a pistol took out two Dakota warriors with a single shot. All good times.

The game took about 1 hour to play, including set-up, and brief rundown of the rules. This was a rather large engagement. Most have fewer figures to start with. Plus, we had 4 players instead of 2. However, none of these factors bogged the game down and it went at a brisk pace. There were no rules disputes and after the initial rules brief very few follow up questions. We were focused on playing the game, hootin' and hollerin', and having a good ol' time.

Posted by Blood and Spectacles Publishing at 8:42 AM