It has been a long time since I have played a game of this.  I decided to break it out again for two major reasons.  First, the death of Dystopian Wars as Spartan Games and their re-birth as Warcradle Games gave me a bit of a hankering for make believe Naval warfare.  The second was reading some of my old battle and looking at some of my old homemade models made me feel a bit nostalgic.  Therefore, I decided to bust out some of the old templates and give it a go again.

As I go back into the archives, I think I started making this game in 2007.  That means this game is 10 years old, give or take.  I haven’t personally played it since 2012 or so.  Therefore, I will be a bit rusty on the rules and probably make a mistake or two.  I find this funny since I wrote the game!  No one should know it better than me right?

To get started I decided to use two relatively basic fleets.  I decided to use the Ammoriss Naval PDF versus a Pirate force.  It seemed somewhat thematic.  Before the rebellion of South Ammoriss, much of the Naval PDFs job was to hunt down and eliminate Pirates that preyed on the convoys that criss-crossed Greater Ammoriss.  Even though I have ships made for the Ammoriss PDF but I decided to just use the templates for this game since I do not have any Pirate ships made up.  Let’s see what happens.

You can find all the rules and stuff to try it for yourself here.

The Ammoriss Naval PDF is raiding the Pirate Fleet.  In a Raiders mission, the attacker can only use half the points of the defender.  Both sides are trying to inflict Damage Points on the enemy fleet, while limiting damage to their own.  If the Attackers inflict more damage than the Defenders, they win.

We are using a 4 by 4 board.  The Pirates are placed on the board edge closest to shore 12 inches away.  The Ammoriss Naval PDF is deployed moving across the table from the Pirate fleet from North to South. 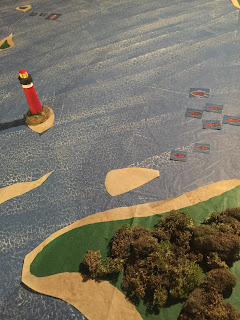 **************
The sunrise was beautiful.  The sea danced under the delicate touch of the sun, and an array of yellow, orange, and red danced and shimmered.  The glow of daylight cut through the sea mist, and a purple haze surrounded the bright ball as it crested the waves.

Captain Smythe-Browne sipped his tea and savored the bitter tang.  This was why he had signed up for the Naval PDF.  Few people got to see the sunrise like this.

“Augurs have detected unidentified readings at bearing Delta- 456,” one of the crew chirped.

The Captain placed his tea cup back in its saucer.  The XO had taken charge and began issue the agreed upon orders.  Smythe-Browne handed the tea cup back to his steward, who quickly tidied it away and scampered to his battle station.  The alert klaxon began to sound.

NavComm had been right.  Captain Smythe-Browne didn’t know how they knew and he didn’t care.  That pirate scum was right where they were supposed to be when his force got here.  Now, he was going to smash them.
****************

Turn 1:
The Raiders automatically start with the initiative.

Move:
The Assureds raced around the back side of the small island.  Meanwhile, the Pirate fleet moved out.  The Skiffs and Pillagers stayed in formation and approached the lighthouse.  The Dependable had to turn towards the Pirates to bypass the island as well.  The Jolly Roberts turned to meet the Ammoriss navy ship while the Monitors tucked in behind the other Pirate escorts.

Battle:
The Dependable opens fire.  The front turret fires on the Pirate escorts but misses due to range and size.  The Las-batteries arc out at the Pirate Frigate, but a Brace by the Jolly Roberts keeps them from serious damage.

The Pirate frigate returns fire with her port batteries and manage to knock a DP off the Dependable!  The other ships are out of range.

Move:
The Saint Invictus moves to cut-off the escape of the Pirate escorts and cross their T.  However, they are speedy, and one manages to get in front of her. The Assureds turn in to finish them off.  The rest break to the Saint Invictus’ port side.  The Pirate Frigate moves to get behind the AN cruiser.

Battle:
The Assureds open fire on the Pillager in front of the Cruiser.  Their combined fire is enough to turn her into a lifeless hulk, despite Bracing.  The second Pillager (Sparrow Hawk) fires on the Saint Invictus, and another shell finds a weak spot and reduces her another DP.  Captain Smythe-Browne may want to try Bracing one of these days?

Instead, the Amoriss Naval PDF Captain orders his crew to Lock-on, but they are unable to.  Instead, the Las-batteris fire on the Pillager, the front turret at the Skiff, and the rear at the Pirate Frigate.  The skiff avoids the heavy shells.  The Pillager is hit once and takes damage.  The Jolly Roberts also braces, but still takes a hit!  The shell manages to strike and destroy the ship’s screw, which is now fouled!

The Monitors also fire on the Dependable, but the shells ring off the Cruiser’s armored belt.  The Jolly Roberts has reduced firepower from Bracing, and only pings a shell off the AN Cruiser’s armor.

End:
The Jackie Tarrow continues to drift on its last course even after being struck lifeless by the Assured attacks.

The Jolly Roberts engineers manage to repair the Fouled Screw on their ship. 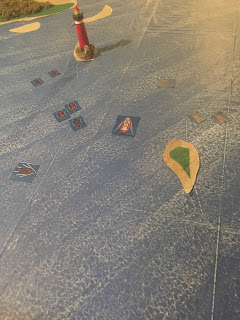 Battle:
The Saint Invictus sets course for the lighthouse eager to try and keep the pirates in his broadside arc.  However, the Pirates are fast and most manage to scatter past.  The Sparrow Hawk and a Skiff move towards the small atoll island.  The Assureds try to move to pursue, but they are set-up by one of the Skiffs!  It crashes into the lead escort and both sink to the bottom.  The Jolly Roberts moves up to pursue the damaged AN Cruiser. 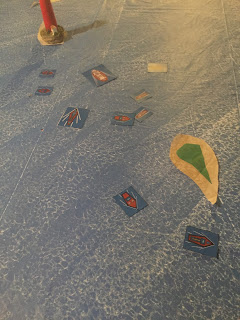 Battle:
Captain Smythe-Brown has the crew lock-on to the Jolly Roberts that is closing and opens fire.  When the smoke clears, all the batteries hit.  The Jolly Roberts braces.  However, it is not enough and the ship takes two hits bringing it down to 2 DP left and crippling her.  In addition, the shells caused massive crew casualties!  The remaining Assured joins in and hits the Jolly Roberts for another point of damage.

The rest of the Pirate shooting is ineffective.

End:
The Jackie Tarrow continues to drift.
Both wake markers are removed. 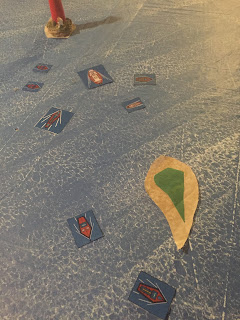 Turn 4:
Pirates with the Initiative.

Move:
The desperate Jolly Roberts manages to All Ahead Full and ram the Saint Invictus, who braces for Impact!  Unfortunately for the Pirates, the Ram causes enough damage to reduce them to 0, and the AN Cruiser is unharmed due to bracing and armor!  However, they are now entangled.

The Monitors split to go around the entangled ships.  The Assured moves after the Pillager and Skiff.  The Skiff rockets off the board and to safety.  Meanwhile, the Pillager comes around to fire on the Saint Invictus.

End:
The hulks of the Pillager and Monitor drift as does the tangled Saint Invictus and Jolly Roberts. 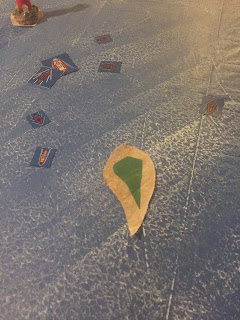 Move:
The Pirates scatter to escape, but the PDF pursues where possible.

Battle:
The last fleeing Monitor fires a point blank shot into the pursuing Assured and reduces him to a lifeless hulk.  Long range stern fire from the Saint Invictus overkills the last Monitor and sinks it.  Trailing fire on the Sparrowhawk misses as well.

The parting stern shot from the Sparrow Hawk pings loudly off the Saint Invictus’ armor.

End:
The other Monitor explodes and sinks.  The Jackie Tarrow drifts, as does the Saint Invictus and the Jolly Roberts. 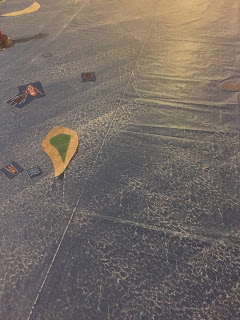 Move:
The last pirate ship escapes the board.

The Jolly Roberts also slips from the entangled wreckage and sinks beneath the waves.

The XO finished briefing him on the repairs underway on his ship.  He sipped at his tea and savored the bitter flavor.  Then set his cup back into the saucer.

“Has NavComm been informed?”
His XO nodded curtly, “They send their regards for a job well done.”

It was indeed a fine time to be in the Navy.
Posted by Blood and Spectacles Publishing at 1:11 AM