On The Painting Desk: Our Arrows will Blot Out the Sun! 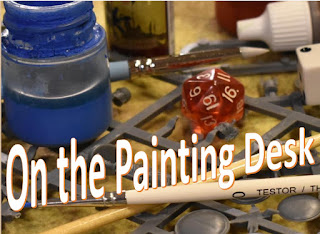 Before Men of Bronze was released, I wrote up an article and campaign to play the Ionian Revolt for Wargames, Soldiers, and Sailors.  However, due to a lack of a Persian army for photographing, the article was not published.  Instead, I did a piece on the Battle of Delium instead.  However, I still had my notes and what I wrote for the Ionian Revolt.

It was these notes and this article that would form the basis of the Ionian Revolt supplement.  In addition, the Ionian Revolt seemed like an ideal venue to take a closer look at the Persian Empire lines-of-battle, and revisit some of their non-Greek foes as well.

However, in order for any of that to happen I needed to get over one big hurdle.  I needed a Persian Army! This had thwarted my initial article and at the time, there were not any great plastic models available.  However, time moves on and now we have not 1 but 2 ranges of plastic Persians to choose from!

The first is from Wargames Atlantic.  I used this company for my Dark Age Irish, and was very happy with the results.  I was able to make an army of 6 units with only two boxes,  They also painted up easily, and were very affordable.  The sets are great for making infantry and archers, but their are no cavalry available.  However, you could easily make the sample Line-of-battle list for Persians from the Men of Bronze book with these models.

The other plastic Persian army is from Victrix Limited.  This company has provided the bulk of my Greek, Macedonian, Viking and Roman forces in 28mm in the past.  I have really appreciated the level of detail and pricing of these sculpts.  The range also has a wider variety of forces from unarmored infantry, armored/unarmored archers, and light and heavy cavalry.  Since cavalry was a big part of Persian armies, it made sense to go with Victrix this time around.

I have been steadily working on this army, and have finished off a large chunk of the infantry.  This includes various light infantry, drilled infantry, Sparabara, Immortals, and a few odds and ends.  That leads me to my last batch of infantry, the Archers.

The Archers are also from Victrix Limited.  Like all of my Persian units the first step was assembly.  These went together pretty smoothly for archer minis.  The two-part heads still annoy me, and I foolishly misplaced some of the arrows along the bows, but in a group it won't matter at all.  I also converted the musician models into additional bowman.  Then, I brush undercoated them with cheap white acrylics. 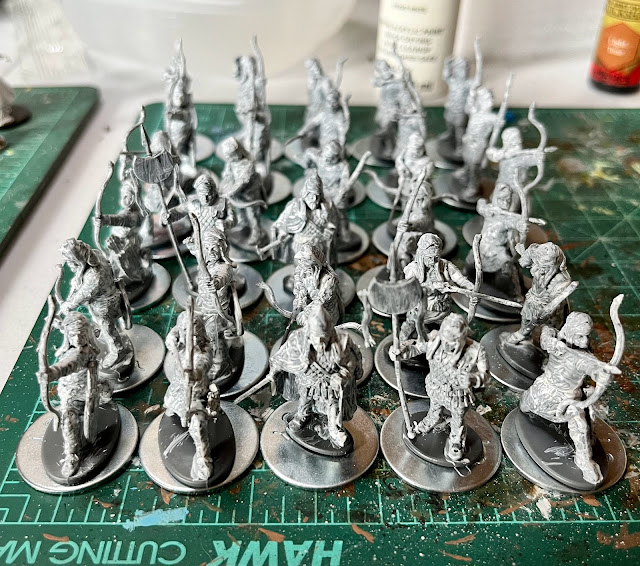 I then went to town batch painting all 30 of them at once.  I started with painting their skin tones with a few different options including Tanned Flesh, Monster Brown, and Fur Brown to give them a variety of skin tones to represent the troops gathered from across the empire.  Then, I painted all of their shoes Fur Brown.

Now, is where it gets tricky when batch painting.  The Persians all have a set of trousers, a skirt, a tunic, and head wear.  All of these should be in separate colors, so you need to group them into smaller batches to avoid duplicating colors on the different layers.  For these layers I was using Desert Yellow, Skeletal Bone, Ultramarine Blue, Ork Skin Green, Rusty Red, Leather Brown, Mummy's Robes, Daemonic Yellow, and Ash Grey in order to get a variety of colors on the models.

Once I had the base colors on, I found myself separating out the 4 command figures.  These guys had more armor and gear than their fellow archers and were causing issues with the batch painting.  I decided to go ahead and paint them as their own little group and finish them off early.  I tried to make their belts Voidshield Blue to tie in with the officers and Imperial troops of the Sparabara and Immortals.  I also used Alien Purple for the coats to give the officers that Imperial tie in as well. Armor was bronze again.

Once the officers were done, I continued batch painting the other 26 or so models.  Half of them got Oak Brown bows and Skeletal Bone arrows, and the other half got the opposite combination.  All the arrow tips were bronze.

Finally, I got the archers painting up where I could complete their belts and straps, which used various colors from Ash Grey, Skeletal Bone, Desert Yellow, and Leather Brown again.  I wanted to keep their color palettes consistent.  Lastly I painted the bow cases and arrows last, using Leather Brown for the case and Desert Yellow for the trim.  The arrows matched the ones on the weapons, and I used Alien Purple as the fletching.

The last step was basing the models and adding some shields for the officers.  Basing I used cheap, acrylic Territorial brown with left-over bits of moss and clump foliage scattered randomly on the base.  The shields I painted on the sprue, and used some Little Big Man Studios transfers for the final look.  I had hoped the transfers would fit on the standards, but they did not.  I had to free-hand those poorly.

As a final step, I decided to take and base some of the large Persian shields individually, in a group of 10.  This way, I could easily convert two units of archers into Sparabara equipped units for some of my games. 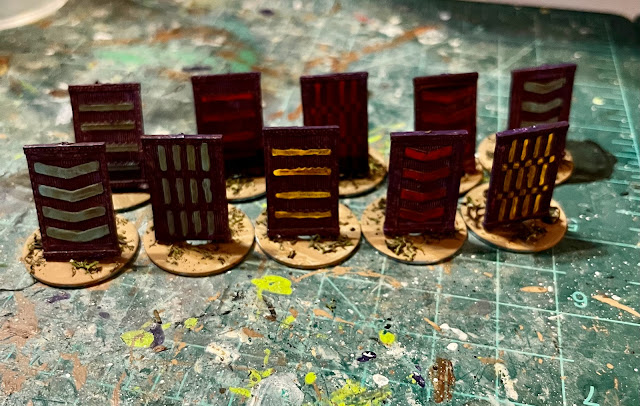 This set gave me a lot of versatile options for using the units in my Persian army.  I could easily use them as three sets of archers, or I could use one of the groups as bow-armed skirmishers.  I could also break them up and combine them with my Sparabara troops to create two units of Sparabara instead.  Finally, the individually based large shields gave me further options for the force.

I won't lie, but finishing these as one big unit was a chore.  Half way through the process, I was struck by the plague.  Once I was past it, it took an extreme effort of will to pick up the brush and keep going on these guys.  The end results look good, but it took a lot of willpower to get this far.  Hopefully, I will not experience this issue when I tackle the 30 or so cavalry models for this army.

Once the cavalry are done, I can move onto a new force!  Plus, I will have all the units I need to start playing the Ionian Revolt campaign.

Posted by Blood and Spectacles Publishing at 12:09 AM