Battle Report: Wars of the Republic- Romans vs. Greeks at the Book Launch 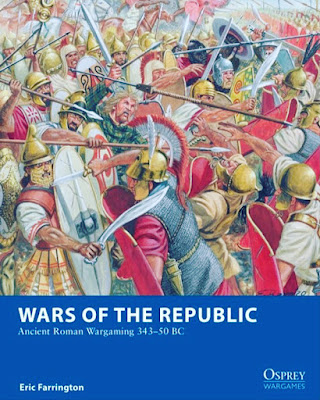 This battle was the main Demo table at the Wars of the Republic launch party at Gestalt Studios in Powell, Wyoming.  As such, there were a few different generals and my main role was as referee, host, and rules interpreter.  The launch party had a surprising amount of people show up looking to game, talk ancient history, talk wargaming, and talk about being an author.  Sadly, I did not get to spend as much time with everyone as I wanted to and I look forward to doing more wargaming events in the area!

The Greeks of Pyrrhus of Epirus came to Italy to aid their fellow Greeks of Tarentum.  However, they faced a rising power in Rome.  The successor mercenary and opportunist, Pyrrhus; was looking for a way to make cash to keep bank rolling his efforts in Greece.  The situation in Italy seemed like a good way to do it!  However, the Romans proved to be stiffer opponents than Pyrrhus suspected.  After three costly victories, Pyrrhus left Italy and went to Sicily instead.  This gave control of Italy to the Romans.

At the launch party, the main Demo table had a combined arms army of Greeks vs. Republican Romans.  Each side had about 3 generals controlling wings of the armies.  These players rotated in and out through out the battle, to give more people a chance at the game. We also had a secondary table of Etruscans and Romans, but I did not get to observe that battle much.

Since I was hosting the event and referee, I do not have full pictures of the battle.  The following is a high-level recap. 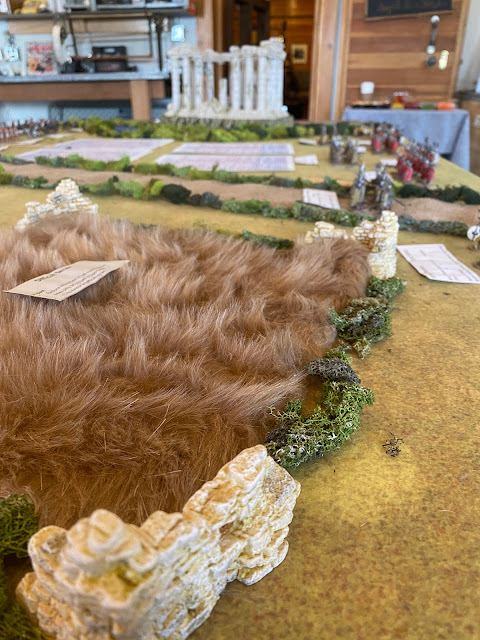 Greeks of Pyrrhus of Epirus
Center:
War Elephants
Silver Shields
Bronze Shields
Right:
Heavy Cavalry
Light Hoplites
Archers
Left:
White Shields
Peltasts
Light Cavalry
Republican Romans
Center:
Triarri x2
Hastati
Right:
Hastati
Principes
Velites
Left:
Hastati
Principes
Velites
Mission:
The game had no complications and was a simple pitched battle.
Set-up:
The table had a dangerous river on the Roman right/Greek left with an impassable temple on the opposite shoreline.  A road slanted across the center of the board.  On the Roman left/Greek right there was a difficult field, and on the Greek side a Difficult forest.
The Greek line stretched across the board from left to right it was:
Peltasts, Light Cavalry, White Shields, Bronze Shields, Silver Shields, War Elephants, Heavy Cavalry, Light Hoplites, and Archers.  The Archers and Light hoplites were deployed in the woods.
The Romans formed up in their typical checkerboard fashion.  Hastati were the front line, with off-set Principes on the edges, and off-set Triarri in the rear.  Each flank had a unit of Velites.  The Velites were near the river on the right, and approaching the field on the left. 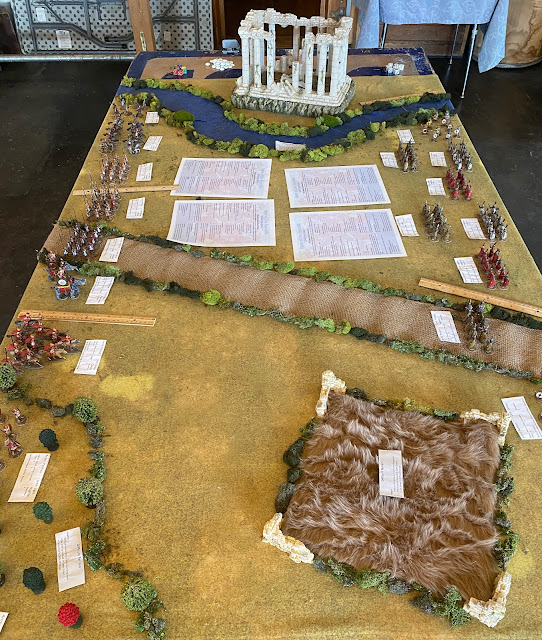 The Battle Overview
Both sides cautiously moved forward, with the Greeks often willing to let the Romans win initiative and not bothering to interrupt.  The Roman Velites crossed the river on the right and approached the Greek Flank, protected by the Peltasts.  The Velites on the left took to the fields.
The Romans sent a Hastati unit supported by Principes forward on the left, along the road.  Meanwhile, the Greek Light Cavalry roamed out ahead of the Phalanx units as they closed.
Soon, the Heavy Cavalry and War Elephants rushed forward and contacted the approaching Hastati.  Their initial charge hit hard, but not hard enough.  The Light Hoplites moved up to support on the edge, but they got bogged down by skirmishing Velites.  However, the Greek Archers put them to flight with a barrage of arrows. 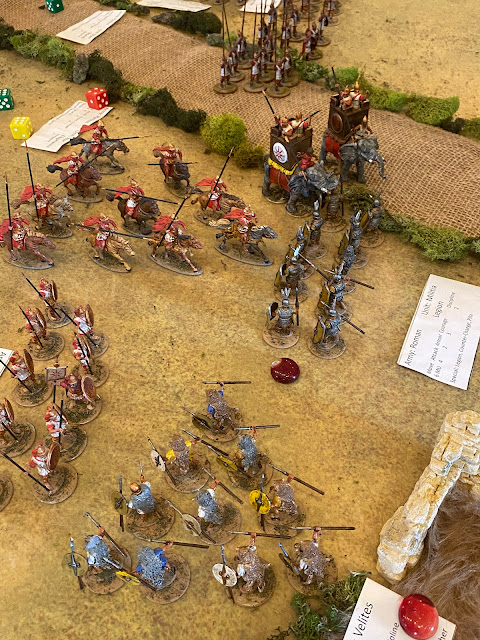 The Light Cavalry, seeing the wall of Roman shields quickly darted back behind their own lines.  Meanwhile, the Peltasts and Velites skirmished along the river banks, trading javelins.
The Principes moved up to support the forward Hastati on the left, and soon the battle was joined by the Greek Light Hoplites too.  It became a swirling melee and neither side was gaining the upper hand.
The swirling melee soon drew in the Silver Shields on the flank, and the Greek LIght Cavalry darted around and hit the Romans in the rear.  Meanwhile, the rest of the Phalanx faced across the field and held the rest of the Roman line in place.
With heroic efforts, the Roman Hastati and Principes managed to fed off the Greek shock troops, but at the cost of their own lives!  The Roman left flanks was shattered, but the Greek main shock arms were also routed in the melee!  With the ensuing Collapse tests, the Greek Peltasts and Archers fled the field of battle.  No longer eager to fight. 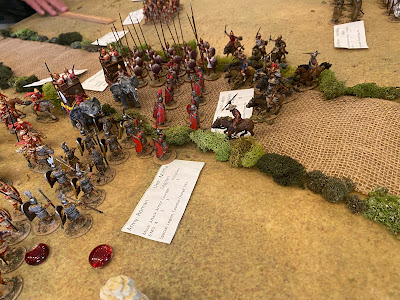 This tore the heart out of the Greek army.  However, they still had a formidable Phalanx.  The Roman Velites crossed the river and attacked the inexperienced Greek White Shields in the flank.  The Greeks responded, and were able to throw off the attack, but were left wavering and battered.  The Velite were routed, but the rest of the Roman army stayed strong.
The last Greek phalanx charged forward, and were met by a counter-charge by the Roman line.  The experienced Roman troops led, with the Hastati on the edges for support.  There was a mighty clash, but the Greek pike blocks were thrown back and disorganized into a wavering mob.
The Greek Officers surveyed the field, and decided to fall back and leave the field of victory to the Romans. 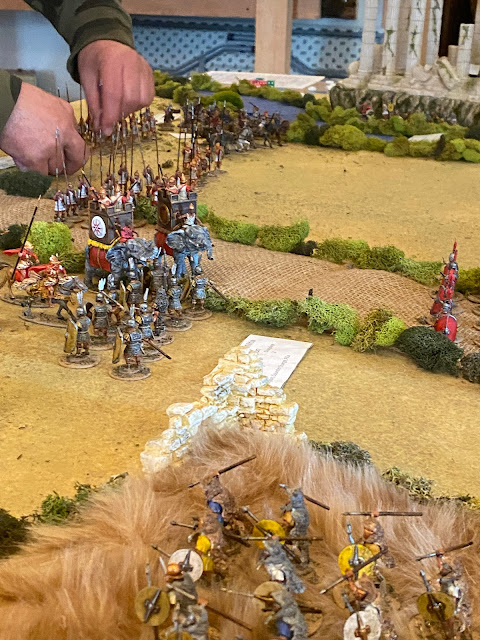 Conclusion
The Romans were victorious.  As can happen in ancient battles, the Greeks over-committed on their initial thrust, and did not have the reserves to exploit the gap made on the flank.  Some of their best units were relegated to "support" roles instead of leading the attack.  The formidable Roman meatgrinder did their job and clever use of supports ensured that they had the manpower late in the game.
Overall, many of the generals had never played a wargame before, but quickly understood the basics of the game, tactics of the period, and how the rules worked.  They enjoyed the battle and were wondering when the next one would be. 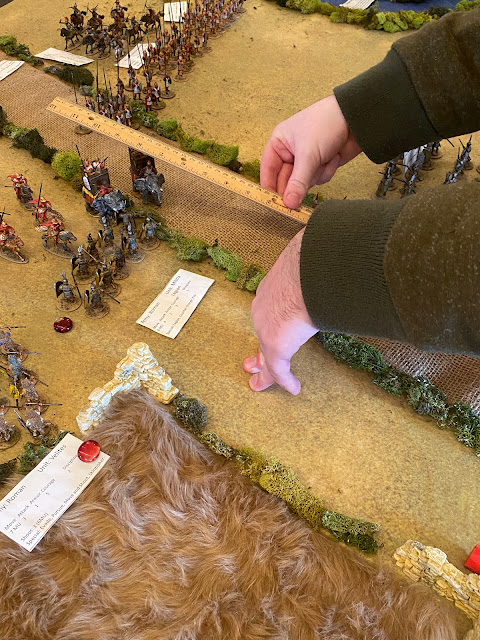 Posted by Blood and Spectacles Publishing at 2:00 AM