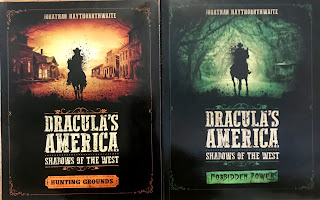 I was lucky enough to pick-up the Core Rules for Dracula's America as well as all the supplements in one go.  I was able to read through and review the core rules a few months ago, but had not been able to look into the supplements too extensively.  I liked what I saw in the Core Rules and am eager to look at the next two soft cover books.

The supplements are called:

I believe Hunting Grounds came out first, but if I recall correctly there was not a big gap between publications.  They probably had them all done around the same time, but needed to stagger the print dates.

On the back cover of Hunting Grounds has the following additions:

You can follow Blood and Spectacles Facebook page for more fun: https://m.facebook.com/pg/BloodandSpectacles/posts/?ref=bookmarks&mt_nav=0
Or our website:
http://www.bloodandspectacles.com/
Or our Messageboard:
http://bloodandspectacles.proboards.com/
Or our Wargames Vault Page:
https://www.wargamevault.com/browse.php?keywords=blood+and+spectacles&x=0&y=0&author=&artist=&pfrom=&pto=
Posted by Blood and Spectacles Publishing at 2:38 AM