I had 7 new Blood Bowl teams to paint and all year to do it, so naturally I painted them all in a matter of days!  I started with the Chaos Goat Herders, Skaven Cheez-Ballers, and the Ork Skulsmash Reeverz.  With the momentum built up, I just kept going, night after night.  I didn't expect to nearly get this far.... but there you go.  This is more painting than I got done all of last year and it is still January!

Today, we are going to look at the rest of my teams.  They will be the Human team from the Box Set, the Dwarf team, the Dark Elf team, and the Elf Union team.  I also have an Ogre to add.  So, let's get into this....

Dwarf Rock-N-Rollers
This was the next team I started painting.  I started with the Troll Slayers as I wanted to make sure my flesh color would last through the team.  I though it was running low.  Thankfully, it lasted long enough to get the job done.  I knew traditionally Troll Slayers all had orange-Hair, but I wanted to be able to distinguish them on the field.  Therefore, the second one I went with a grey look.

I am not exactly sure where the green and grey color scheme came from.... but there it is.  I think it turned out okay.  My Blitzers were actually the last models I painted for this team.  I tended to paint them 2 positionals at a time, and three lineman at a time. 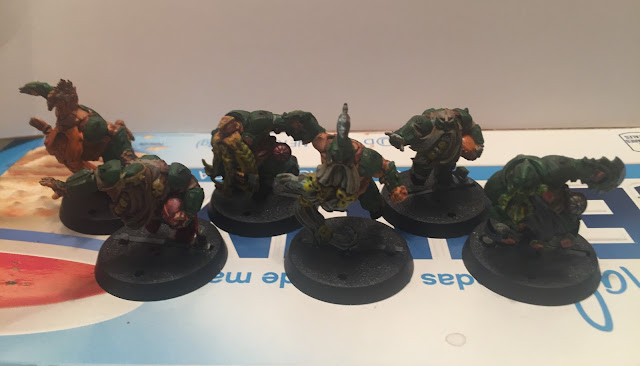 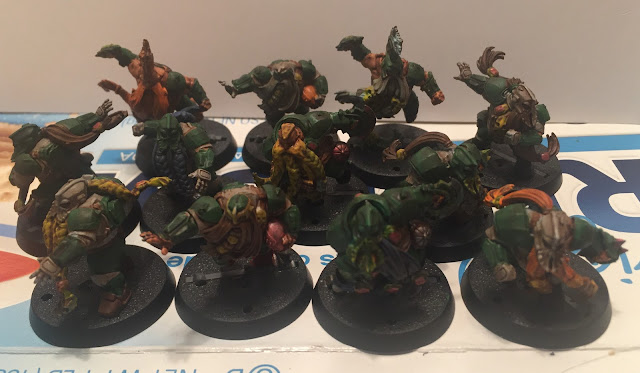 There is the full Dwarf Rock-N-Roller team in all their glory.  Deciding the beard colors was one of the most fun parts of the team.  I used a soft tone wash to give them a less "gribbly" look than the Skaven and Ork teams.

Human Nottingham Nobles
The next team I *ahem* tackled was the Nottingham Nobles.  The astute reader will notice that they are all named after the G.W. Designer staff back when the Dev Team were mini-gaming celebrities and Games Workshop used a more "Cult-esque" marketing strategy like the one used by Apple. 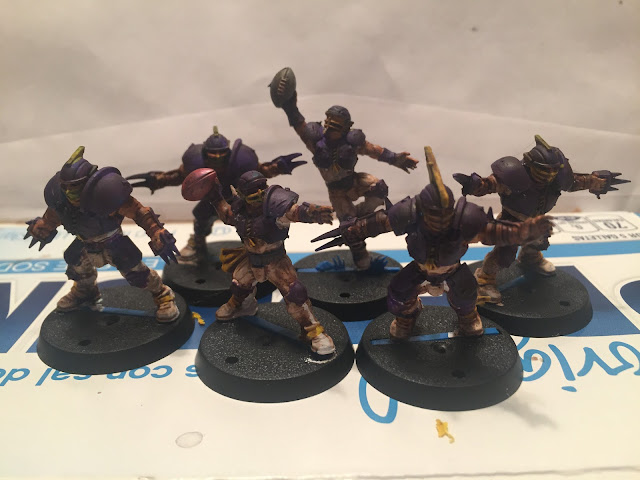 Unlike the Dwarf team, I sat down and panted half the team all at once.  I decided to go with a Purple and White scheme.  Purple is the color of royalty, and with a name like the Nobles you were saying you were a cut above.  However, I also used this color scheme as if masked my own local NFL team. 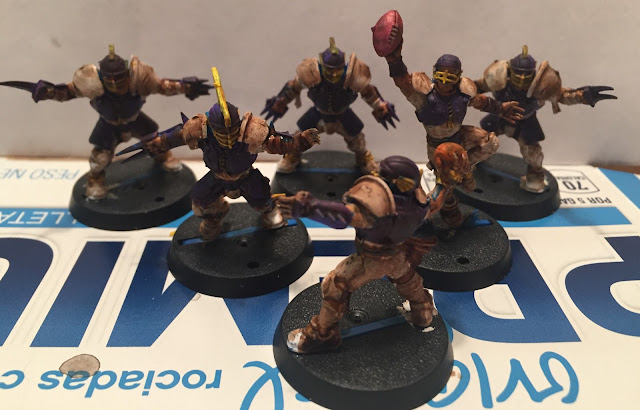 To differentiate the players in the same pose, I again went with an alternating color scheme using white shoulder and knee pads instead of the purple ones.  Of note, this team is almost complete painted using cheap acrylic paint from a big box retailer using brushes from said retailer.  I then washed them all with Army Painter soft tone. 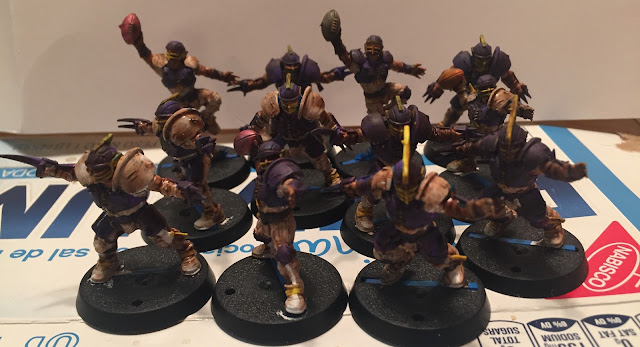 I really enjoyed choosing the colors for the Blood Bowl balls on this team.  I have no idea why but it was a chance to throw in some off-the-wall colors from the rest of the team.

Dark Elf Black Guards
I picked up this team while traveling and was really excited to put it together and try it out.  However, they were not assembled in time for the Princess Owayonna Tournament.  I had a vision of what I wanted to do with this team's paint scheme early on.  I wanted Dark Blue pads, very pale skin, and a purple wash.

I actually painted the Blockers first.  I can't call them lineman, because there are two ladies in their midst.  I decided to differentiate the players with different color Cold One hides and a small shoulder ribbon of different colors. 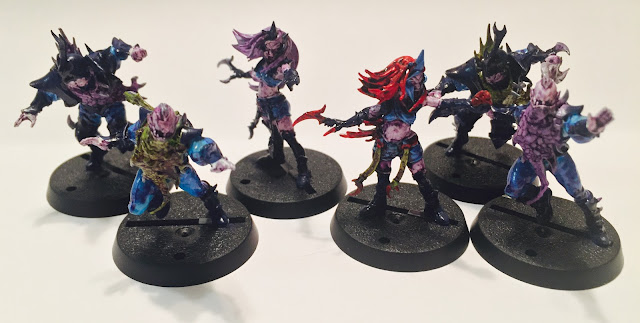 Then I tackled the positional players.  I am not a fan of the Runner sculpts, but they turned out pretty neat once painted.  I think the purple skins turned out better than the green, but there you go.  Again, i mostly painted these with the cheap big box acrylic paints.  I was growing more confident in what they could do and didn't even bother to water them down at all.  They take a tad longer to dry, but I think the results turned out just fine.  Plus, the price was right and I had easy access to a large selection. 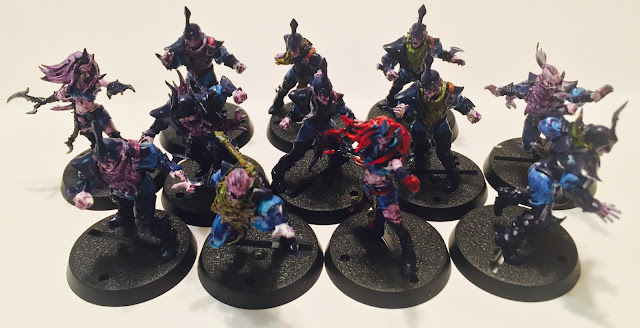 I really enjoyed painting the Lilac hair on the Witch Elf.  It is not as striking as the red, but I really like how it turned out.

Ogre Blocker
I remember it was getting late, but I was on a roll!  I had just painted the Black Guards and wanted to keep going.  It was the perfect time to start on the Ogre.  I decided I wanted him to look different enough from each team that he looked like a hired thug just added to the roster so I could move him about as needed.  I wanted to give him a mix of metal armors.  I settled on jumpsuit Orange as his main uniform color to add to the thug look. 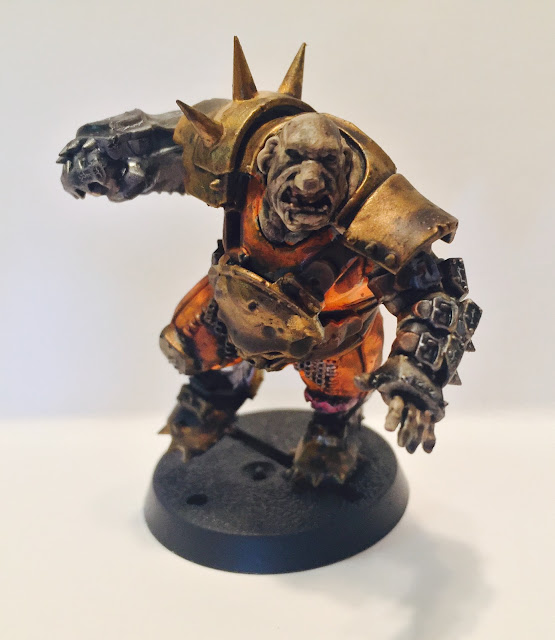 I actually painted his teeth brown instead of a whiter color so they would look gnarled and rotted.  A simple but effective paint job mostly using block colors and a quick Dark Tone wash to pull out the details.

Elf Union Superiors
The final team was the Elf Union team.  I have never really played any elf teams in the past and was interested in getting this guys painted and on the field.  I also bought these guys while traveling.  However, they were the last team I bought.

I started out with the Blockers and I knew I wanted Green and white somehow.  For some unknown reason, I started by painting their leggings a Lime green, the brightest green I had.  From there I went to an evergreen for the pads.  I did not know how it was going to come out and I was a bit nervous.  I was again using the cheap craft paints and these colors required a few coats to get the right coverage.  They were a bit thin. 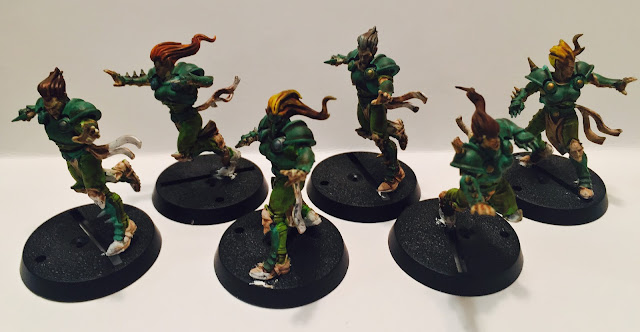 The new sculptors did a great job on the athletic shoes most of the Blood Bowl models are wearing.  I just wish my painting skills could have made better use of the detail on the shoes.  I could imagine the players hawking contracts for their shoes on Cabal Vision, they were that detailed.  For the Elf team I went with white shoes, white ribbons, and white loin clothes.  The loin clothes were not fun to paint.  You will notice this team also uses a mix of male and female blockers.

The positional players were next.  Again, their hair and the Blood Bowl balls were fun to paint since they gave me a chance to break the scheme up.  For one of the throwers, I decided to go with pink tips on his white hair.  I really wanted him to stand out as a bit of a showboat.  I also tried to use more Blonde hair on this team than any of the other teams, but I really like the way the red-hair on the blocker turned out.  A soft Tone wash from army painter was again used after blocking the main colors with cheap craft paint. 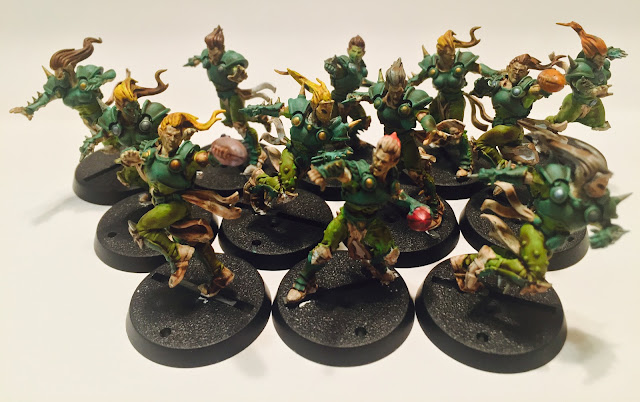 My last Blood Bowl team was painted up.  I will probably add two more teams to my league, but I am going to wait for the Lizardmen and Chaos Dwarf teams.  Nurgle's Rotters and the Undead team just don't do that much for me.  However, my family may feel differently when they go the FLGS so we will see.

With all my Blood Bowl models done I painted more int eh first month of 2019 than all year for 2018.  A good start.  I went down to my stash and started digging around for what else I had to paint, but didn't find much. I checked my Hobby Cash stash, it it was looking a little low, so I will have to wait before I can get new Plastic, Metal, or Resin dudes to paint.  Try to self-fund my hobby from Wargame sales is hard!

*Shameless Plug* If you want to help me out, go to the Wargame Vault Blood and Spectacles page, and pick-up some games.  You can even pay what you want for them!*

Thanks for looking.  I can;t wait to get these guys on the pitch in 2019.  I am very curious to see how these Elf teams play.
Posted by Blood and Spectacles Publishing at 2:41 AM