On the Painting Desk: Blood Bowl

When I first got the new edition of Blood Bowl I was unsure how much I was going to invest in it.  After all, I all ready had three previous teams of Khemri, Chaos All-Stars, and Skaven.  The new scale was a bit of a disappointment initially.  I mainly wanted the turf and counters as I had always relied on other people for those parts.

It was with some surprise that my family got interested in playing games of Blood Bowl with me.  They enjoyed it so much, that when my wife went to the local FLGS she insisted I pick up some more teams.  Son, I had a new Chaos, Dwarf, Skaven, Elven Union, and Dark Elf team. Then, I picked up an Ogre.  I wouldn't be surprised if she wanted to get a few more teams later too.  It wasn't long until we had started our own little Blood Bowl League- The Deep North League- Southern Regional Conference.  We kicked it off with a single elimination style tournament where each of my family members would take on other family members in the Princess Owayonna Healing Spring Bottled Water Tournament; which was a tongue-in-cheek reference to a local legend.  We even brought the game to play during the Holidays, but we didn't get a chance.

Well, that was all well and good, but I was getting tired of playing the plastic teams.  Sure it made them easier to transport but I felt the game lost a little.... something with grey plastic models.  Some of the visual impact was lost.  Therefore, over the course of this year I am going to try to get them all painted.

So far I have painted three teams. 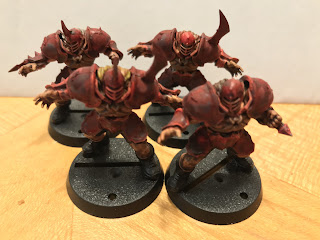 These gentleman are the Chosen Warriors of the Goat Herders.  My family though it was really funny to give them elite, posh sounding names combined with a more traditional Chaos-y sounding name.  Therefore we have, Asquith Kneecapper, Brisbane Skullthumper, Todd Organgrinder, and Winston Azhander. 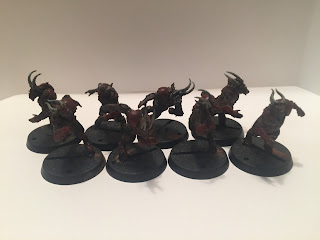 Then we have the namesakes of the Goat Herders, the beastmen.  The picture turned out really dark due to the taking this picture in the middle of the night; but the Chaos wastes are dark and snowy in winter. 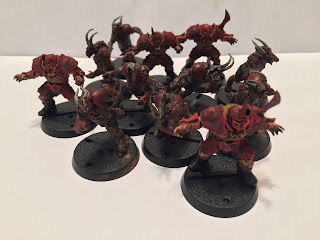 What is most interesting to me about the Beastman is that I used a .50 cent acrylic paint from a big box retailer to paint the brown.  I simply watered it down 5 parts water to 1 part paint and got a very wet finish.  In retrospect I think a 3:1 mix would work better.  I then applied this in several layers to get the base coat.  This was an experiment, and I think it turned out really well.  I look forward to trying it with other colors and models as it is far cheaper than dedicated miniature paints. 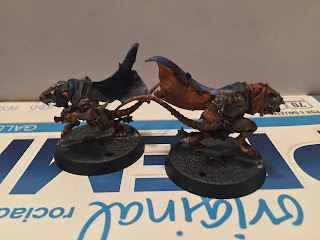 I started this team by working on the positional players for the team.  The Gutter Runners, Blitzers, and Throwers.  I decided to make this team a combination of blue, orange, and grey.  I actually used barbarian flesh on the skaven hands and feet to help them stand out from the grey fur. 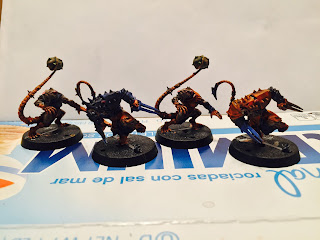 I used alternating Orange and Blue to be able to differentiate between players on the team.  This would help me differentiate them on the field and still allow for a dynamic and unified looking team. 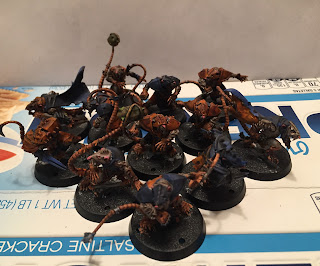 I used a strong tone ink wash to give them a dark and dirty look.  I have found that my painting style has become much more "gribbly" as I get older.  I just do not have the interest or time for precise painting schemes.  I find this style of base colors and a wash to give me a relatively quick and satisfying result.

Ork Skulsmash Reeverz
The Ork team is the one from the boxset in the green plastic.  I didn't even bother to re-paint the flesh and just used the bare green plastic for the lowest layer.  Oddly enough, this time I started with my Line Orks. 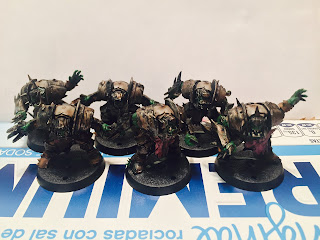 These guys did not turn out how I wanted them to at all.  I wanted a Black, Silver, and Grey Oakland Raiders look, but these guys just came out looking like 'Ard Boyz!  Way too much shiny silver and not enough black and grey.  However, once it was completed I didn't want to turn back and they still looked dead 'ard. 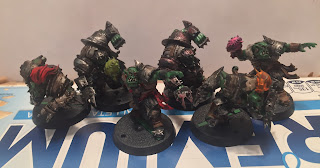 Here are the positional players.  Getting the Blitzers and Throwers to look different enough was no problem, different colored balls and hair squigs would do the job nicely.  The Black Orks and Line Orks were a different story.  For those, I used a red wash on the breast and back plates to give a reddish look to them.  I red washed all the armor on the Black Ork Blocker.  In addition, I used a Dark Black Wash on the Black Orks giving them a blacker look, while the Strong Tone was a bit brownish. 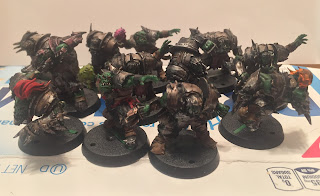 So, these guys look like they are carrying around some tough armor and still look a bit different to tell them apart in the field.  I have painted numbers under their bases, and might apply back plate decal numbers to them all later..... but maybe not.  I have no plans to do anything with the bases at this time.

Conclusion:
So three of my 7 new teams are done.  Once I get the Dark Elves, Humans, Dwarf, and Elven Union painted I might think about purchasing the next team.  However, there is a good chance I will just buy them anyway!  So far, I have been happy with my progress so far, but I think the Elf and Human team will want a less gribbly style.  I don't know if I am up to it anymore, but we will see!
Posted by Blood and Spectacles Publishing at 1:00 AM