This year, my blog will be spending some time (probably a lot of time) talking about Men of Bronze by Osprey.  This is completely selfish on my part as I am the author!

When you are working with Osprey Publishing, you are lucky enough to have access to their amazing pool of artists and artwork.  It is great if your wargame rules cover a period that they have published on because then the editors can pull artwork from their extensive library.  This artwork serves to really bolster the rules and make them look very professional and cool.

However, Osprey does not have a large library or range of miniatures for their war games series.  Instead, they ask the author to provide images and photos for the book.  That means as the author you need to have access to models, terrain, and photography equipment for your chosen period of rules. In my contract for an Osprey Wargame Series book they ask for at least 30 300DPI or better photos of models in action. 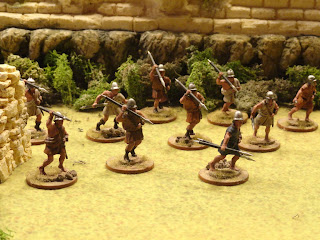 This actually turned out to be harder than I expected for a couple of reasons.  The first being that I am not much of a photographer!  The second being I am not much of a painter!  The third being I did not have a great terrain selection.  Those that have followed my blog for a while probably realize that I am more of a Do-It-Yourself style gamer.  That is good enough for my basement and gaming group, but not good enough for publication. 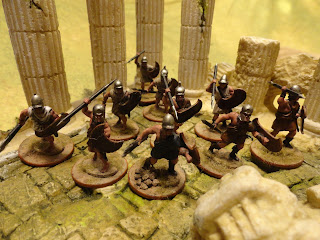 I purchased the models I would need through Victrix and got a talented friend of mine named Nick Heckel to start painting them up for me.  Then, I managed to buy a few simple Greco-Roman terrain pieces from a local pet store.  I also purchased a professional table covering.  From there I spruced my terrain collection up with some lichen and a few scatter terrain pieces. 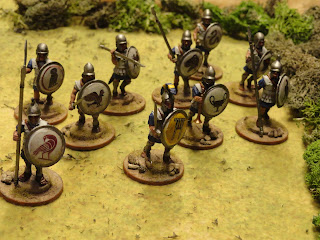 I borrowed a very nice Cannon digital camera, some lights, and a tripod.  I really didn’t know how to use it, but after some trial and error I got the basics of using the Macro lens down.  From there, I just took a lot of photos and tried to judiciously weed out the bad ones.  This left me with about 100 digital photos I sent to Osprey to choose whichever ones they wanted to use. 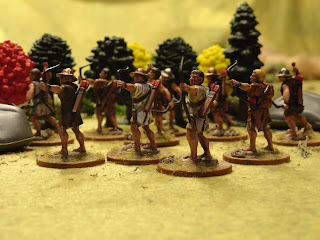 Here are some of that did not quite make the cut. 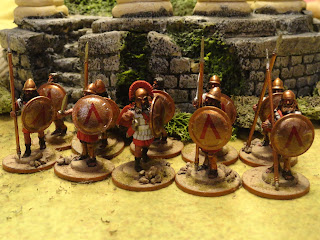 Unfortunately, my armies only consisted of 28mm models.  However, the rules themselves are scale and basing agnostic.  The only stipulations are that you need a "Leader" for some measurements, and be able to determine if a unit is in Phalanx or Open Order.  You can use a token to differentiate Open or Phalanx, and any model in the center of the Unit as the "Leader".  Some folks have asked for other scale models for the rules, but alas I just did not have other scales of models to take photos of. 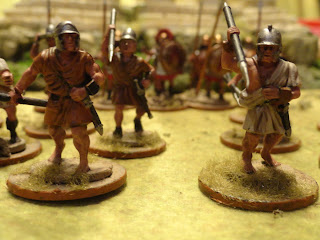 I am interested to see which pictures actually do make the final cut into the book.  Plus, I am super excited to see the artwork that they select.  I have seen the cover art, and it was amazing.  It looks very different than the Work-In-Progress cover you see on the Pre-order pages!  I can't wait to hold it in my hand! 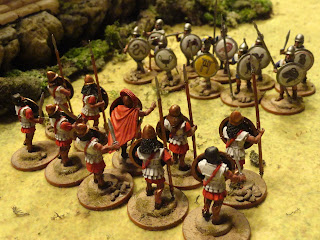 I hope to have a fully painted Spartan, Corinthian, and Macedonian army for photos and battle reports soon.  In the meantime, you can see my painted forces in action in this Desecrate the Sacred battle report for Men of Bronze .

Posted by Blood and Spectacles Publishing at 3:12 AM