Battle Report: Blucher- Along the Danube

I have been wanting to play a game of Blucher for about two years. I know almost nothing about the Napoleonic Wars and have never really wargamed them before. In truth, it was a bit intimidating with all the foreign unit names, various army structures, and do not even get me started on the uniforms. However, the idea of the “Big Battles” (along with the big hats) was appealing to me.

When I first saw and heard about Blucher, it seemed like a good fit for a newbie to Nappies like me. Most of the square, line, column, stuff was abstracted due to the game scale. Uniforms and army structure were as well. In addition, it was designed to be playable with cards so I did not need to start a big new collection of models. Two years later, I finally got up the scratch to pick it up and the 100 Days supplement. 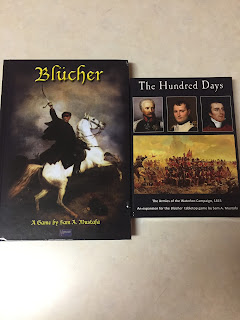 I gave the basic rules a quick read through and found them easy enough to understand. From there, I went to the Honour Website and downloaded Along the Danube the introductory game. This gives you a basic table lay out, some army cards, and a scenario to get you started. Since my usual wargaming buddy and myself knew almost nothing about the period and the warfare of the time this seemed like a pretty good place to start. Plus, the rules themselves encouraged starting here before moving on. Who was I to argue?

Normally at this point, I lay out the scenario and the forces, but you can find all of that on Sm Mustafa's website at Along the Danube so I am going to skip it this time. Plus, I don't want to embarrass myself too badly by completely screwing up the terminology.

As the attacker, I was the French with 3 infantry corps and a reserve cavalry corp. By opponent was the Austrian defenders with 2 Infantry Corps and a mixed reserve corp including Guards, artillery, and cavalry units. 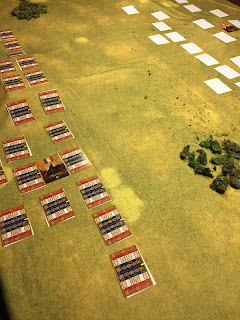 I will spare you my usual turn-by-turn breakdown as I was not keeping track that closely. However, a typical game can take up to 30 turns with a turn consisting of everything one side does including moving, shooting, assault, etc. It is an I-GO-U-GO system. The turns are broken down into relative time of day, so on turn 16 you know it is past noon and you are onto early afternoon. At the end of turn 30 it is assumed to be nightfall. I thought this was a clever little timescale that allowed you to match up your fictional, ahistoric, or historic games to the timing of the period.

To start your turn, your opponent rolls 3d6 and keeps the score hidden. This is the amount of Momentum (or activation) points you have for your turn. Having units activate and move costs points. If you move as a Corp it costs fewer points than moving units individually. Units that move can not shoot. You keep moving until your opponent lets you know you are out of movement points. Therefore, the game has a resource management element and gives your opponent a reason to pay attention during your turn.

Units begin as blinds on the table, and are not revealed until they move, are shot at, or an enemy unit gets close enough to see them in Line-of-Sight. This was important during set-up and the very early stages of the game as you do not know exactly what your army will be up against. For example, in our game, I suspected that the top of a hill on the left side of my force would be Austrian artillery, however it was revealed later to be Light Cavalry that swept down on the flank of some of my battered units later in the game. Therefore, deployment is a bit of a game of Blindman's Bluff.

For this game, I decided to mass my II Corp to smash up the Austrian center with I and III corp screening the flanks to fix my opponent. The Reserve Cavalry would then move forward and exploit any breakthroughs. One of my objectives was behind a river on my right flank, while the other was on top of the heights in the center of the Austrian deployment zone. I was not sure what my opponent was planning.

I got to start off with the first turn, and moved across the board with I, II, and III Corps. I soon learned that you would not get enough Momentum to move your entire force, even with careful use of Corp movement. My opponent generally waited for me and kept his units concealed. We exchanged artillery potshots at each other. Artillery and units have an Ammo rating. As Artillery fires this number goes down and it becomes less effective and giving a decisive result, as you roll less attack dice for them. After the game, it seems reasonable that you may want to save your artillery for a decisive barrage, instead of just opening fire as soon as you have the range. 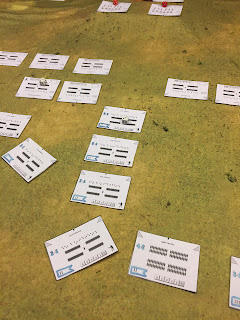 This game does not use a set movement distance, but is instead measured in base widths. Therefore, you can change the scaling as you see fit. In the base rules using the cards a base width is three inches. The minimum for anything is 1 base width with cavalry units being able to move up to 4, and artillery fire 8 base widths. This gives you and idea of the movement to firepower ratio. Musketry is most effective at close range, but is equivalent to charge range. However, a unit that moves can not shoot. Therefore, you need to time your moves accordingly for the maximum result.

Each unit has a starting Elan. As your unit takes hits or engages in close combat its Elan is reduced. It is possible for a unit to exhaust itself by winning close combat after close combat as every time you fight, win or lose; you will lose Elan. With the Elan rules for cavalry/infantry and the Ammo rules for artillery you can see that the name of the game is attrition.

The Austrians generally got to shoot as the French approached to soften them up. However, it was the French on the attack who eagerly throw themselves into close combat across the board, trying to form a break through. The lead brigade of the French II Corp was pounded by Austrian cannon fire and musketry and soon their Elan was reduced to the point where they routed and were removed from the board. However, the next brigade in the Corps dutifully stepped forward to fill the gap.
As a commander, you can choose to “Retire” a unit from the battle voluntarily. This is critical as a retired unit does not count towards your Morale breaking point. However, a unit can only retire in their own turn, using Momentum points, and if there is a clear line to their table edge. Therefore, a clever opponent or poor deployment can make retiring impossible. 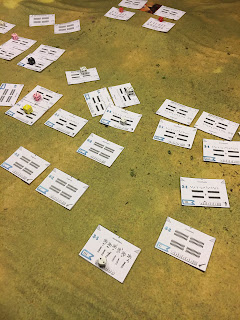 By mid-Morning the French attack had come in contact across the battlefield. The weight of the attack in the center managed to tell and the Austrians began to crumble there, but the French Flanks were having a hard time holding their own. Plus, the Reserve Cavalry was having a hard time moving up do to a lack of Momentum. This allowed the Austrians to reinforce the heights with Grenadier units and use their own cavalry reserves on the French left. Soon, the French I Corp was essentially out of the fight and the main attack was blunted by the Austrian reserves. 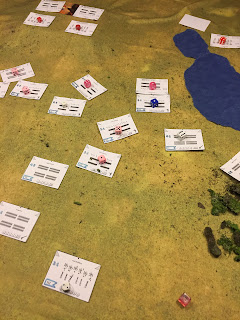 Casualties on both sides were stacking up quickly. By early afternoon, the French II Corp had managed to force their way through the Austrian center. However, the Cavalry was unable to exploit the breakthrough as the Austrians were closing in on the flanks. By the end of the Afternoon (Turn 19) the French realized that they could not carry the heights. They had sustained to heavy of a toll and withdrew. The Austrians were triumphant! 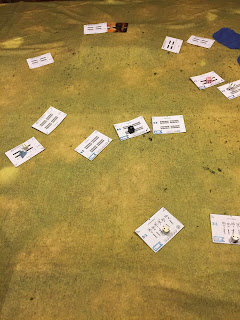 At the end of the battle, the French had 8 units retire, and 8 route. That is what cost them the game. The Austrians were also on the knife edge with 7 units retired and 7 routed. It was a close fought battle, with the final turns being more of a series of localized skirmishes as the battle lines themselves had completely fallen apart. Therefore, neither of us could efficiently use our Momentum Points by the end and coordination fell apart.

As the game progressed, turns went by faster and faster as we got a hang of the rules and their were fewer units to do stuff with. The Austrians won because they made better use of their reserves and were better able to coordinate all arms of their army then I was. My opponent did a better job using his Momentum Points at the point of decision than I did.

The entire focus of the game is around resource management. There are strong attritional elements to the game combined with Momemtum Points means that success in Blucher is about managing “Friction” since you can not do everything you need to do, and even for the stuff you can do; it will wear down your own troops. Despite that, there are some cinematic moments to be found, like when the first French brigade was blasted into dust, when Austrian guards charged down hill into the flank of a combat and routed the French, or when the French Cavalry came sweeping across the field in a Reserve move and plugged the holes in the French line. However, the general “grinding” nature of the battles will not be to every players liking.

To try and fit this review/battle report into my standard style:

Conclusion
It is clear that a lot of thought and design work went into this game to get the right “feel” for the size of battles and the period by using the right level of abstraction and detail. I am pretty sure we did not do everything perfectly. But the author put a lot of working into making a complicated style of warfare into something easy to play on the table. This period seems prone to If This/Than That rules, but these rules are very tight and had surprisingly few of these types of situations.

This was just a quick overview of the basic rules using the intro scenario Sam Mustafa recommended. There is still a lot more to delve into in these rules such as the Scharnhorst Campaign System, Commander personalities, scenarios, weather, and more. I look forward to exploring further with these rules.

Posted by Blood and Spectacles Publishing at 4:17 AM